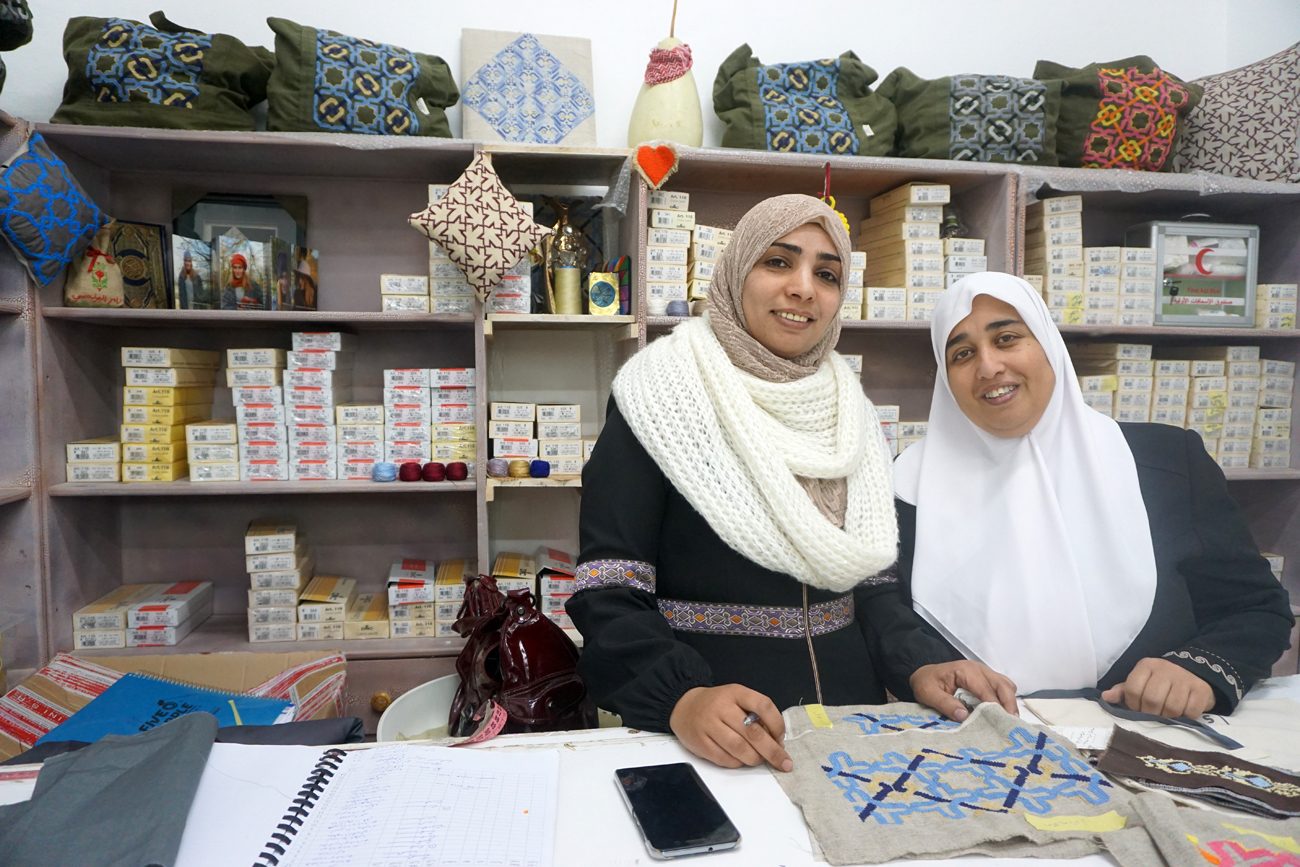 JERASH, Jordan (CNS) — The poorest of Jordan’s 10 camps for Palestinian refugees would seem to be the unlikeliest place from which to launch an international business, but SEP Jordan is no usual enterprise.

Here, 350 Palestinian refugee women — and a few Syrians — practice their traditional craft of embroidery, but with a modern twist.

Inside a bright canary yellow-colored building among the camp’s rabbit-warren of narrow alleyways, a beige tote bag is embroidered in an Islamic geometric pattern suggesting sun bursts of orange, pink and yellow, while another captures the colors of the sea in navy, light blue and tan.

Another woman edges a silken white beach tunic in turquoise embroidery, while a lavender cashmere scarf gets embellished with intricate needlework in mauve. Traditional Bedouin red and white and Palestinian black and white kaffiyeh scarves take on a new spin with multicolored embroidery accents.

SEP stands for Social Enterprise Project. Its founder and CEO, Roberta Ventura, is a former Italian stockbroker, who decided about five years ago that she “could no longer just stand and look at the situation in refugee camps deteriorating without private sector involvement.”

“When I see refugees, I see a huge untapped potential, like you and me, who had to leave their homes,” Ventura told Catholic News Service.

Nawal Aradeh, project manager, told CNS that her job with the company “completely changed my life, because it gave me the chance to generate an income at a time when my personal circumstances were dire.”

“It was absolutely necessary for me to help myself and my six children. I felt overwhelmed by how I was going to do it because there are few job opportunities in the camp,” explained Aradeh, a former teacher in her late 40s, dressed in a simple white headscarf and long black cloak.

Aradeh is a Palestinian refugee who was raised in Jerash, 30 miles north of the capital, Amman. Jerash is considered one of the largest and best-preserved sites of Roman architecture in the world outside of Italy.

Yet it also has the impoverished Gaza Camp, where Palestinians fled during the Arab-Israeli wars. Aradeh and the other Palestinian refugee women participating in SEP Jordan grew up in Gaza Camp.

Selected out of hundreds of social enterprises, SEP Jordan was recognized for its groundbreaking work to improve the lives of refugees at an event in Vatican City hosted by Cardinal Peter Turkson last December.

The same month, SEP Jordan became one of 15 enterprises chosen by the Washington-based Laudato Si’ Challenge organization, inspired by Pope Francis, “to effectively and sustainably improve the lives of 10 million refugees, migrants and internally displaced people by 2020.”

Ventura emphasizes that SEP Jordan’s mission is to “bring thousands of refugees above the poverty line in a way which is driven by their talent.”

Raised a Catholic, she is happy to have quit her finance career to devote herself to working with the refugees, whom she considers artists of their handiwork craft. She also sees her new job as a type of calling.

Ventura and her economist husband, Stefano d’Ambrosio, have grounded the project on solid financial principles, so together with the women and a few men, such as regional manager Mahmoud Al Haj, SEP Jordan is the “first-ever private company ever to be set up in 50 years of the Gaza Camp’s existence,” she said. It is neither a nongovernmental organization nor a microcredit project.

“It helps that the women identify themselves with the brand, and they aren’t beneficiaries of aid. We are colleagues. They had enough of small microloans, fearing they could never pay them back,” Ventura said.

Asma Aradeh, 37, started as an embroiderer at the project and now heads up quality control. She, too, said the employment enabled her to move out of a decrepit, tin-roofed building where rain poured in during winter months and into a safe home for her family.

Besides the obvious economic advantages to the project, Asma Aradeh said it carries the added therapeutic value to their craft.

“Embroidering is relaxing and relieves stress. All the pressures are released when you are making each stitch,” Asma Aradeh, a mother of six, told CNS. “You feel a release from tension, tiredness, financial pressures and other things weighing you down psychologically and physically.”

However, SEP Jordan is not just a “feel-good” project; its high-quality craftsmanship caught the eye of award-winning Hollywood costume designer Jacqueline Durran, who employed some of the women to hand embroider costumes in the film, “Mary Magdalene,” starring Rooney Mara and Joaquin Phoenix.

The movie portrays Mary Magdalene, one of Jesus’ most important followers who also witnessed his crucifixion and resurrection. Durran said it was an “incredibly rewarding experience” working with the team of artists at SEP Jordan.

Their creations are also sold in high-end stores such as Harrod’s in London and in the Swiss ski resort of Gstaad. A new shop featuring the quality goods has opened in Geneva, and SEP Jordan’s products are also sold at the Landmark Hotel in the Jordanian capital, Amman.

“When the women cross-stitch, they put their feelings and emotions within the threads of their piece,” said Asma Aradeh, summing up the feelings of those involved.

“That’s why every stitch tells a story. And there is a story really behind every piece,” she said.