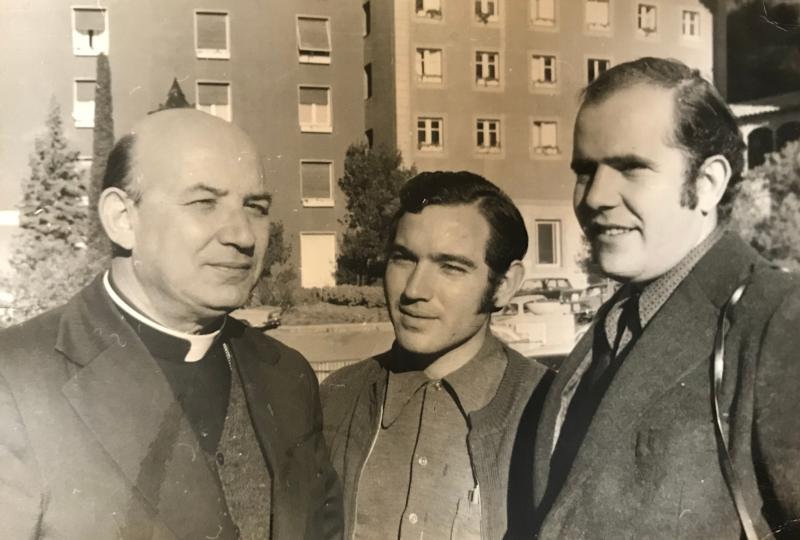 VATICAN CITY (CNS) — Pope Francis applauded the beatification of four Argentine martyrs — a bishop, two priests and a layman — who were murdered early in the country’s seven-year long “Dirty War.”

After praying the “Regina Coeli” prayer with pilgrims in St. Peter’s Square April 28, the pope said the lives of Blesseds Enrique Angelelli Carletti, Carlos de Dios Murias, Gabriel Longueville and Wenceslao Pedernera are models for those “who work for a society that is more just and based on solidarity.”

“These martyrs of the faith were persecuted for the cause of justice and evangelical charity,” the pope said. “Let’s applaud the newly beatified!”

The four martyrs were beatified during an outdoor Mass in La Rioja, Argentina, April 27 celebrated by Cardinal Angelo Becciu, prefect of the Congregation for Saints’ Causes.

In his homily, Cardinal Becciu said the four men were “faithful witnesses of the Gospel” who stood firm “in their love for Christ and his church at the cost of suffering and the extreme sacrifice of life.”

Upon seizing power in Argentina in 1976, the military dictatorship began a swift campaign of brutal repression, including by executing political dissidents or those perceived to be left-wing sympathizers; in all, an estimated 30,000 people were killed or disappeared.

Among the first casualties in the military’s campaign were Blessed Murias, a Franciscan priest, and Blessed Longueville, a French missionary. Both men served in the Diocese of La Rioja.

According to the Argentine website “Nunca Mas” (“Never Again”), a site cataloging the casualties of the “Dirty War,” several men who identified themselves as federal policemen arrested the two priests on July 18, 1976, subsequently torturing and murdering them.

A week later, Blessed Pedernera, a catechist who also spoke out in defense of poor workers, was targeted by the dictatorship’s death squad. Several men stormed his house and shot him repeatedly in front of his wife and three daughters.

As bishop of La Rioja, Blessed Angelelli, who publicly denounced the executions occurring in his diocese, met the same fate as those of his flock. After celebrating a Mass in memory of Blesseds Murias and Longueville on Aug. 4, 1976, the bishop and a priest accompanying him were forced off road by several cars following them, causing their truck to overturn.

Cardinal Becciu praised all four men for carrying out ministries that were rooted in defending the rights and dignity of the poor within the framework of the church’s social doctrine.

“It was a work of faith formation, of a strong religious and social commitment, anchored in the Gospel, in favor of the poorest and most exploited and carried out in the light of the newness of the Second Vatican Council,” he said. “We could define them, in a certain sense, as ‘martyrs of the conciliar decrees.'”

Each martyr, he added, offers a distinct model for Christian living. Blessed Angelelli teaches today’s bishops to fulfill their ministry with “ardent charity” and “being strong in faith in the face of difficulties.”

Blesseds Murias and Longueville, Cardinal Becciu continued, teach priests to lead prayerful lives by “not entering into compromises with faith,” while Blessed Pedernera is an example for lay men and women to be transparent in the faith and allow “themselves to be guided by it in life’s most important decisions.”

“We admire them for their courage. We thank them for their fidelity in difficult circumstances, a fidelity that is more than an example,” the cardinal said. “It is a legacy for this diocese and for all the Argentine people and a responsibility that must be lived in all times.”

PREVIOUS: People can find peace by visiting those who suffer, pope says

NEXT: Pope makes donation to help migrants traveling through Mexico