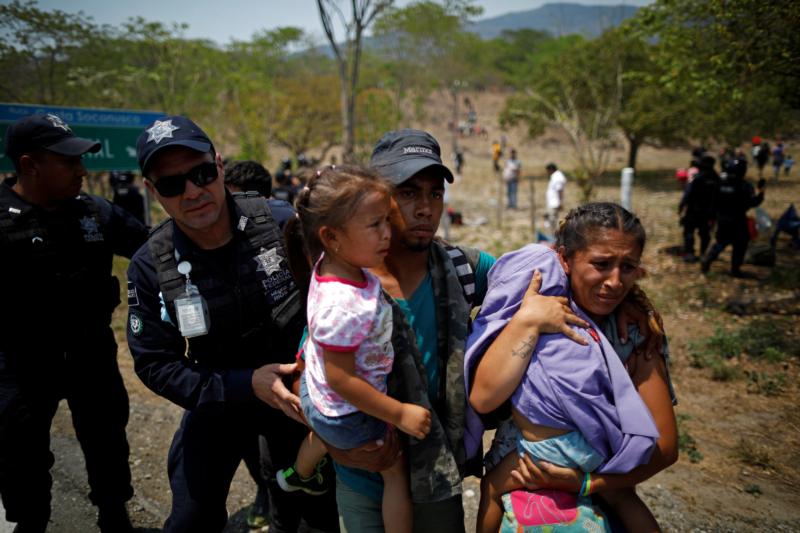 A family of Central American migrants is detained by Mexican federal police officers April 22, 2019, in Pijijiapan, Mexico, during their journey toward the United States. (CNS photo/Jose Cabezas, Reuters)

TAPACHULA, Mexico (CNS) — Pope Francis has donated $500,000 to assist migrants attempting to travel through Mexico, but who are increasingly being impeded by Mexican officials from reaching the U.S. border.

Those migrants who travel the length of Mexico are also being impeded in their attempts to apply for asylum in the United States and remain in precarious conditions south of the border.

The donation “will be distributed among 27 projects in 16 dioceses and Mexican religious congregations that have asked for help to continue providing housing, food and basic necessities to these brothers and sisters,” the Vatican charity Peter’s Pence said in an April 27 statement.

The Vatican already approved projects run by seven dioceses and three religious congregations: the Scalabrinians, the Sacred Hearts of Jesus and Mary and the Hermanas Josefinas.

The donation comes as the crush of migrants arriving at the U.S. border reaches levels not seen in more than a decade. Mexico’s Catholic Church has helped the migrants with little cooperation from the various levels of government.

Priests who work on immigration matters say the federal government has yet to outline a policy or offer a proper response, while state and local governments prefer not spend money on migrants.

The donation was made as Mexico comes under U.S. pressure and steps up its own enforcement against migrants — backpedaling from a promise made by President Andres Manuel Lopez Obrador in his 2018 campaign not to “do the dirty work of any foreign government.”

In March, U.S. authorities detained 92,607 migrants, more than twice as many migrants as arrived one year earlier and the highest monthly figure in 2007. The number of unaccompanied minors and family unit detentions has soared in the fiscal 2019 by 66 percent and 374 percent respectively, when compared to the same period one year earlier, according to U.S. Customs and Border Protection.

“Men and women, often with young children, flee poverty and violence, hoping for a better future in the United States. But the U.S. border remains closed for them,” the Peter’s Pence statement said.

Thousands of Central Americans have traveled more than 2,500 miles in caravans from San Pedro Sula, Honduras, to the U.S. border at Tijuana, Mexico, drawing the ire of President Donald Trump.

“All these people were stranded, unable to enter the United States, without a home or livelihood. The Catholic Church hosts thousands of them in the shelters of dioceses or religious congregations, providing the necessary to live, from housing to clothing,” the statement said.

Further complicating matters, migrants who transit Mexico and request asylum in the United States are turned away at border crossings and required to put their names on long waiting lists, a process known as metering.

This process has put enormous pressure on migrant shelters in Mexico-U.S. border cities, which are often rife with insecurity and where migrants are preyed upon by criminal gangs. A plan known as Remain in Mexico has also sent hundreds of U.S. asylum-seekers back to the Mexican side of the border, while their claims are heard in U.S. courts.

“At the northern and southern borders, these places of welcome are currently overpopulated,” said an April 27 statement from the Mexican bishops’ conference.

Shelter operators in border cities say they cannot attend to migrants arriving from the south, a flood of deportees and ever-more asylum-seekers requiring long-term shelter as they wait in Mexico to make their claims in the United States.

Additionally, “Among the residents of the towns and cities where some of these shelters are, they have started to raise strong concerns about informal campaigns that ‘criminalize’ migrants and impede them from being able to obtain jobs, rent an apartment or travel quietly in the streets,” the bishops’ statement said.

Churches in the Dioceses of Tapachula, which serves the path through Chiapas state that caravans have followed upon entering Mexico, previously responded with outpourings of generosity when caravans first arrived. But priests say the fatigue has set in and fewer people pitch in.

“We have spoken here of a humanitarian crisis and we believe, in accordance with our faith, we have to help. They’re brothers,” Bishop Calderon said.

Mexican Interior Minister Olga Sanchez Cordero said April 23 that 300,000 migrants had entered the country in an irregular fashion over the first three months of 2019.

Mexico started offering humanitarian visas in late 2018, allowing migrants to freely transit the country and avoid crimes like kidnapping, extortion and sexual assault. But it stopped the practice due to overwhelming demand. Mexico also is no longer offering “safe conduct” passage to the throngs of migrants from Cuba, Haiti and African countries to pass through the country.

Mexican officials also have started breaking up caravans, including one in late April in Chiapas. Priests say caravans are now forming in southern Mexico rather than Central America.

“The Mexican government faces an authority crisis to deal and walk with the migrant caravans,” Bishop Calderon said. “They don’t offer them dignified and humanitarian treatment. They don’t even respect the documents they give them, which allow them free transit.”