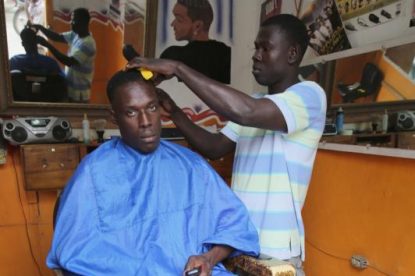 A barber cuts a man’s hair at his shop in Hinche, Haiti, Feb. 13, 2015. Christian hairdressers, beauticians and barbers can live their faith by being kind and courteous to their clients and cutting out the gossip and petty chitchat, Pope Francis said. (CNS photo/Bob Roller)

VATICAN CITY (CNS) — Christian hairdressers, beauticians and barbers can live their faith by being kind and courteous to their clients and cutting out the gossip and petty chitchat, Pope Francis said.

“May you always act with integrity, thereby making a positive contribution to the common good,” he told cosmetologists who belong to an Italian Catholic association dedicated to St. Martin de Porres.

Speaking April 29 to members of the association, who were on pilgrimage to Rome, the pope asked that their patron saint help them live out their Christian values in the workplace.

“May he inspire you, above all, to carry out your profession in a Christian way, treating clients with kindness and courtesy, always offering them a kind and encouraging word, avoiding the temptation of gossip that easily finds its way in your workplace, too. Everyone knows this,” he said.

The pope praised the 16th-century Peruvian saint, who had only been allowed to take the vows of a Dominican lay brother because of his mixed-race; he was the illegitimate son of a Spanish nobleman and a freed black woman originally from Panama.

“He accepted this humble condition, living a life of total humility, radiant with love” and dedicated with great sacrifice to the poor and ill, using the medical skills he learned working in a pharmacy and for a barber-surgeon, the pope said. He helped found the first hospital in the Americas in Lima, Peru.

NEXT: A look at the College of Cardinals after Polish cardinal’s 80 birthday