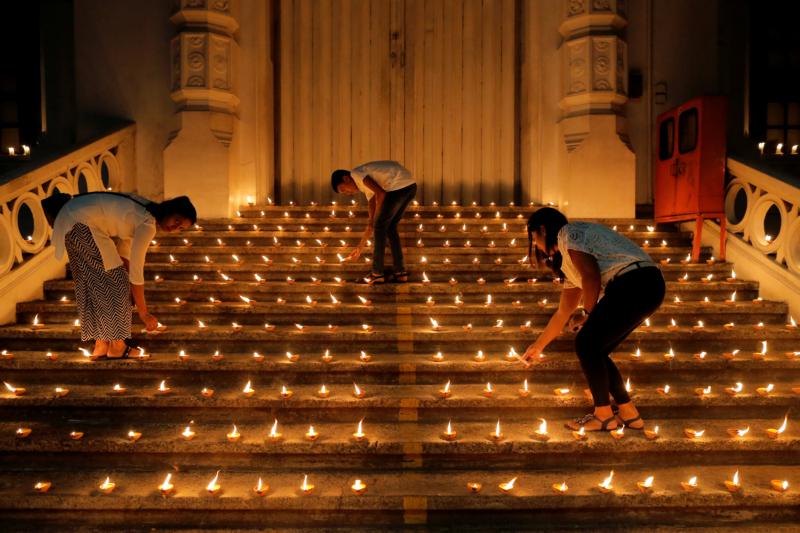 Young people light candles near the closed door of a church in Colombo, Sri Lanka, April 28, 2019, during a vigil in memory of the victims of a string of suicide bomb attacks across the island on Easter . (CNS photo/Thomas Peter, Reuters)

COLOMBO, Sri Lanka (CNS) — Fears of suicide bomb attacks kept many Christians and Muslims away from churches and mosques for Sunday Mass and Friday prayers a week after the Easter bombings.

The Catholic Church halted Masses and Sunday schools until security improves after terror attacks killed more than 250 people April 21; the gates of churches were closed with padlocks, reported ucanews.com. Many mosques canceled Friday prayers April 26 in solidarity with churches.

Colombo Cardinal Malcolm Ranjith held a private Mass in suburban Borella April 28; it was broadcast live on radio and television.

“We pray for those who lost their lives and that those who were injured will recover soon after this great tragedy last Sunday,” he said during his homily.

“No one has the right to kill innocent people. Stop these killings in the name of God. Human life is the most beautiful, and all of us are unique.

“God has created man for others, and every person is a reflection of God, but these incidents are insults to humanity. We pray for peace and coexistence and understanding each other without division,” the cardinal said.

All schools in the country remain closed after the suicide attacks. Military checkpoints and operations have become common in most villages. Public gatherings and religious services have been canceled, ucanews.com reported. Tough security measures have been adopted by public and private institutions, with security officers checking bags and vehicles.

Christians and Muslims fear they may be targeted after the military warned there could be more attacks on religious centers.

Two Catholic churches, one evangelical church and three luxury hotels were targeted in the Easter attacks, for which Islamic State has claimed responsibility.

Cardinal Ranjith has criticized Sri Lanka’s government for its failure to act on intelligence reports warning of terrorism. He said the government’s behavior was absolutely unacceptable and he would have called off Easter services if he had been warned in advance.

On April 26, army troops had a gunbattle with an extremist Muslim group at a house in Kalmunai. Police said at least 15 people — including three who blew themselves up with suicide bombs — were killed. Six children and three women were among those killed.

The government has banned two little-known Islamic organizations, National Thowheeth Jama’ath and Jammiyathul Millathu Ibrahim, in the wake of the Easter Sunday attacks.

The government has also banned Muslim women from concealing their identity by wearing the burqa and the niqab.

Nadeera Wickramasinghe, a Catholic teacher, said the terrible attacks were the work of a few individuals and not of Sri Lanka’s entire Muslim community.

“We must always respect the wonderful diversity of Sri Lanka and fortify the culture of unity that the country needs to thrive,” said Wickramasinghe.

“People of all backgrounds and faiths have come together to condemn these atrocities. Unity is the most powerful answer to terrorism.”

Religious and Priests for Human Rights called on the government to conduct an impartial inquiry to determine the institutions and their heads that permitted this mayhem so that they can be prosecuted.

“The Christian community in this moment of tragedy stood together and suffered patiently without having recourse to any acts of revenge. If the terrorists had the intention to provoke the community to retaliate, it did not happen,” said Father Nandana Manatunga of Religious and Priests for Human Rights.

“It is a clear defeat to those that planned and executed this carnage together with all their accomplices and a moment to witness the spirit of Christ,” he said.

“Instead of the taxpayers’ money being used to compensate victims, those responsible should be compelled to meet most of the expenses as part of their punishment.”

The Human Rights Commission of Sri Lanka appealed for people to refrain from hate speech and inciting communal violence, saying the best response to extremism and extremist violence is to work toward a just social order.

Britain, the U.S. and India have warned their citizens to avoid traveling to Sri Lanka.

NEXT: Pope to hairdressers: Cut the gossip, highlight politeness