Pope urges students to fight their addiction to phones 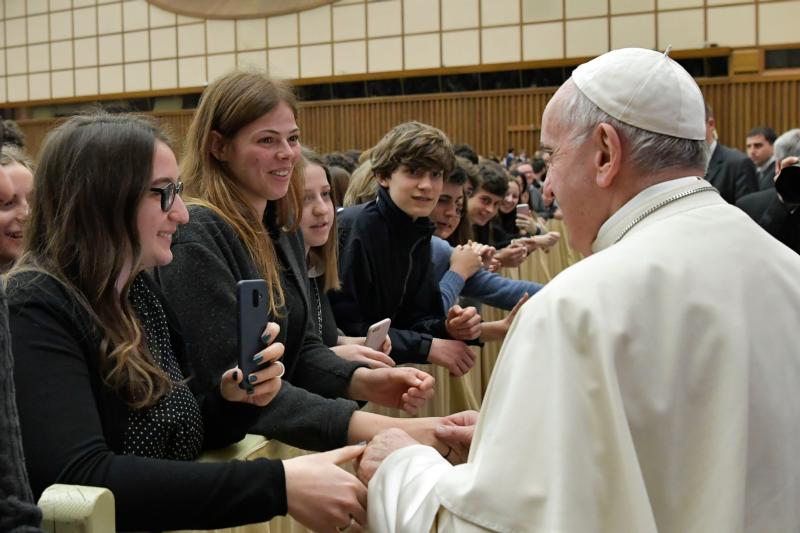 Pope Francis greets people during an audience with students and staff from Ennio Quirino Visconti Lyceum-Gymnasium, a school in Rome, at the Vatican April 13, 2019. The pope encouraged high school students to break their phone addiction and spend more time on real communication and moments of personal reflection. (CNS photo/Vatican Media)

VATICAN CITY (CNS) — Pope Francis told high school students to break their phone addiction and spend more time on real communication with others and in moments of quiet, personal reflection.

Young people need to learn about “healthy introspection” so they can listen to their conscience and be able to distinguish it “from the voices of selfishness and hedonism,” he said.

The pope made his remarks April 13 during an audience with teachers, students and their family members from Rome’s oldest classical lyceum — the Ennio Quirino Visconti Lyceum-Gymnasium. Some notable alumni include Eugenio Pacelli, the future Pope Pius XII, and Jesuit Father Matteo Ricci.

The pope told the high school students to “please, free yourselves from your phone addiction!”

Looking up at his audience as they applauded, the pope said he knew they were aware of the many forms and problems of addiction. But, he warned, an addiction to one’s mobile phone was something “very subtle.”

“Mobile phones are a great help, it marks great progress. It should be used, and it is wonderful everyone knows how to use it” for the “wonderful” activity of communication, he said.

“But when you become a slave to your phone, you lose your freedom,” he said.

“Be careful because there is danger that this drug — when the phone is a drug — the danger of communication being reduced to simple ‘contacts'” and not true communication with others, he said to more applause.

He told them to not be afraid of silence and to learn to listen to or write down what is going on inside their heart and head.

“It is more than a science, it is wisdom, so as to not become a piece of paper” that moves in whatever direction the wind blows, he said.

The pope also told the teenagers that God gave everyone the ability to love.

“Don’t dirty it” with shameful behavior, but rather, love “cleanly” with modesty, fidelity, respect and a big generous heart.

“Love is not a game. Love is the most beautiful thing God gave us,” he told them, so be vigilant, protect people’s dignity and defend “authentic love, so as not to trivialize the language of the body.”

He asked them to help their school remain free from all forms of bullying and aggression, which are “the seeds of war.”

And he encouraged them to reject mediocrity and indifference, and instead, “dream big,” living with passion and embracing diversity.

“Dialogue among different cultures, different people, enriches a nation, enriches one’s homeland,” he said. It helps people move forward in mutual respect and be able to see the world is “for everyone, not just for some.”

NEXT: Pope makes surprise visit to community for people with Alzheimer’s