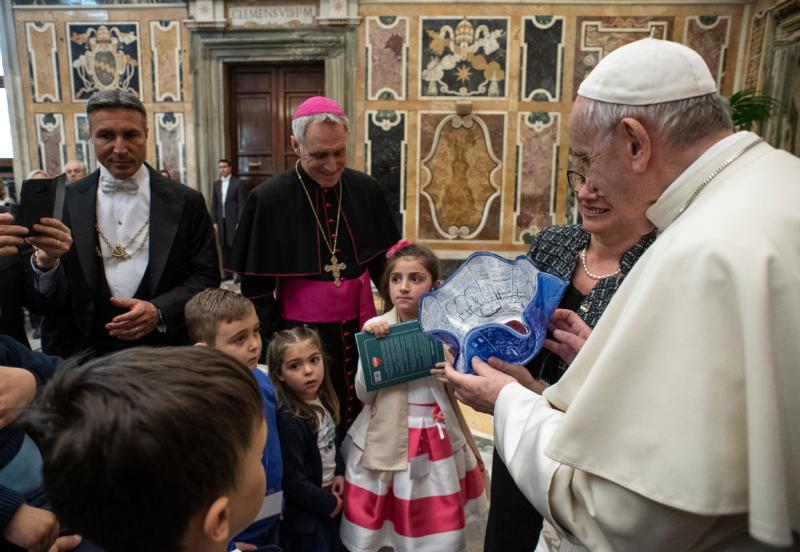 Pope Francis accepts a gift during an audience with members of the Italian Association of Organ Donors at the Vatican April 13, 2019. The pope said that when done ethically and free of charge, organ donation is a selfless gesture. (CNS photo/Vatican Media)

VATICAN CITY (CNS) — When done ethically and free of charge, organ donation is a selfless gesture that contributes to fostering a culture of life, Pope Francis said.

Christians who donate their organs offer “a gift to the suffering Lord who said that everything we have done for a brother or sister in need we have done for him,” the pope said April 13 during a meeting with members of the Italian Association of Organ Donors.

However, he added, organ donation must remain “as an unpaid, free act.”

“In fact, any form of commercialization of the body or any part of it is contrary to human dignity. In giving blood or an organ of the body, it is necessary to respect the ethical and religious perspective,” the pope said.

While donating one’s organs in life or after death responds to a social need that “still remains great,” he said, it also gives donors the opportunity to go “beyond one’s individual needs and open oneself generously to a greater good.”

“In this perspective, organ donation is not only an act of social responsibility, but also an expression of the universal brotherhood, which binds all men and women together,” he said.

He also emphasized the importance of promoting “a culture of donation” where one’s own death can bring forth the gift of “life and health” at a time when life is consistently threatened.

“Faced with threats to life, which we unfortunately have to witness almost daily as in the case of abortion and euthanasia,” the pope said, “society needs these concrete gestures of solidarity and generous love to make it clear that life is something sacred.”

Pope Francis encouraged the organization’s members to continue defending and promoting life “through the wonderful means of organ donation,” which harkens to Jesus’ words to “give and gifts will be given to you.”

In doing so, the pope said, “we will receive our reward from God according to the sincere and concrete love we have shown toward our neighbor.”

PREVIOUS: Election 2013: Book looks behind the scenes of conclave

NEXT: Pope urges students to fight their addiction to phones