The French in Canada find meaning of faith in cathedral blaze 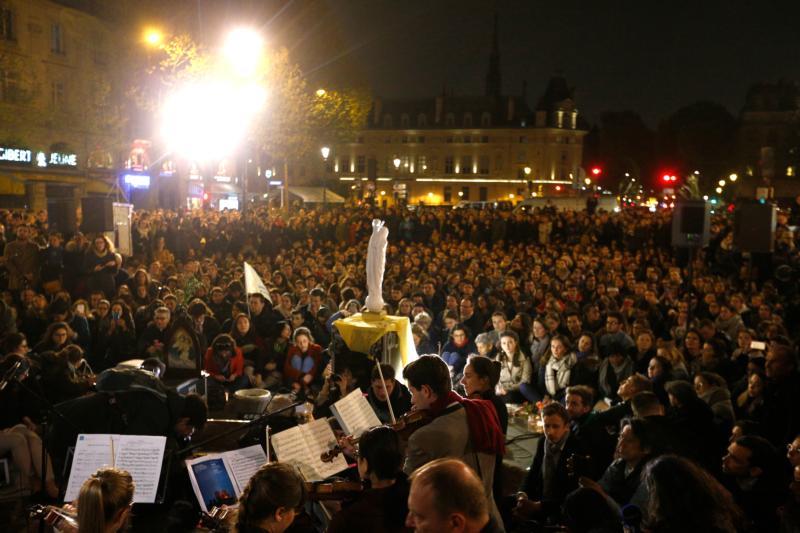 People attend a vigil near Notre Dame Cathedral April 16, 2019, a day after a fire destroyed much of the church’s wooden structure. Officials were investigating the cause of the blaze, but suspected it was linked to renovation work that started in January. (CNS photo/Paul Haring)

MONTREAL (CNS) — The fire that ravaged a large part of Notre Dame Cathedral in Paris offered an opportunity for French Catholics with Canadian connections to reflect on the impact the event can have on their faith.

Popular French Catholic singer Gregory Turpin, who joined thousands of Parisians at the scene of the tragedy, said “there is something violent and shocking” about the fire.

“I was present. I went all the way around Notre Dame. I saw thousands of people. Every 50 meters I saw people praying around a priest. Others sang a song to the Virgin. To see such a monument go before one’s eyes leaves no one indifferent,” he in a telephone interview from Paris.

“In any case, whether one is an atheist or not, whether one is Republican or not, it’s a part of history that goes away. It may be time to realize that we are all connected to our history. That may be important,” he said while watching the cathedral burn.

Isabelle Morel, deputy director of the Higher Institute of Pastoral Catechetics at the Catholic Institute of Paris, described how her colleagues and she were in awe of events as they transpired at the peak of the blaze April 15.

“We had the impression of being hit in gut, upset in our hearts and in our heads,” she said. “It was as if something of ourselves, us, together, we people, went up in smoke before our eyes without being able to do anything.”

Beyond the pain caused by this disaster, Morel saw a symbol of the church’s current situation as it responds to the clergy sexual abuse crisis and the hope that people of faith have that truth and justice will prevail.

“The church burns. Not only Notre Dame, but the perfect image we have made of our universal church,” she wrote in an email from Paris.

“Our illusions of a motherly church, protective, attentive to all and especially to the small, the fragile, go out in smoke in the inferno of international and ecclesial news,” her not continued. “How not to be taken aback by the force of the symbol: Notre Dame on fire at the beginning of Holy Week, drawing in the Parisian sky a red cross of flames. The cry of the abused, the forgotten, the condemned, rose to heaven.”

After the fire, as the world peered inside the Gothic cathedral to see many symbols of the faith and cultural heritage of Catholicism had survived, things did not seem as bad as feared, she said.

“In the black ruins of ashes, passing your head through the gaping door: the cross of Christ, luminous in the depths of the choir, intact, the white stone altar bathed in light, intact, prefiguring the resurrection already at work. What an extraordinary moment to live for Parisians, for believers, for the world,” Morel added.

Father Vincent Cormier of St. John the Baptist Parish in Montreal, a native of France, expressed his solidarity with all those affected by the tragedy.

“It’s our identity. The cathedral has gone through so many events I can understand their pain. I am in communion with them,” he said.

However, although affected by the partial loss of Notre Dame, Father Cormier explained “that we are all the temple of the Spirit.”

“From a Catholic point of view, it is our relationship with God that is paramount. Attachment to stones does not make much sense. It is much more the national dimension of this event which affects me, than its religious dimension. In a way, these are just stones and pieces of wood. I know that many will not share my opinion on this,” he explained.

Laurent Tessier, a French doctoral student at the Institute of Religious Studies at the University of Montreal, said the fire can send a message to Quebecers and North Americans, as news of churches being sold, abandoned or demolished stack up.

“Heritage reveals many riches,” he explained. “Heritage unites and gathers well beyond the nation, far beyond the borders. To those who see only piles of stones more or less well arranged, I tell them those stones are alive. They are the memory of past generations who have worked with conviction to give future generations. A heritage in peril is the ruin of the soul of an entire people, of a whole civilization.”

Tessier noted the real “miracle” that took place during the fire occurred in the streets as people gathered and peacefully prayed.

Casgrain writes for Presence info, based in Montreal.

PREVIOUS: God’s glory is shown on the cross, pope says at audience

NEXT: Irish commission: Grave for children was improper, but not a septic tank