God’s glory is shown on the cross, pope says at audience 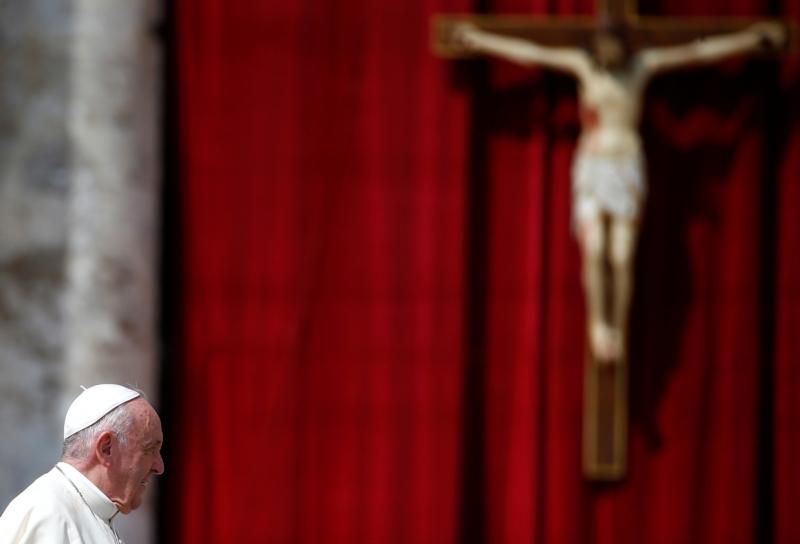 VATICAN CITY (CNS) — The glory of God is not manifested with fanfare and applause but displayed through the love of Jesus’ sacrifice on the cross, Pope Francis said.

“True glory is the glory of love because that is the only kind that gives life to the world. Of course, this glory is the opposite of worldly glory, which comes when one is admired, praised, acclaimed: when I am at the center of attention,” the pope said April 17 during his weekly general audience.

Arriving in St. Peter’s Square, the pope invited several children to join him in the popemobile to ride around the square while he greeted thousands of pilgrims.

Among those present at the audience was 16-year-old Swedish climate activist Greta Thunberg, who spoke briefly with Pope Francis at the end of the general audience. She started the “school strike for climate” initiative, which has expanded to include tens of thousands of students taking a day off school to demonstrate and demand their government’s act against climate change.

“Thank you for standing up for the climate and speaking the truth. It means a lot,” Thunberg told the pope.

In reply, Pope Francis told the young woman, “God bless you; continue to work, continue. Go along, go ahead.”

While greeting a group of French pilgrims at the audience, the pope expressed his “affection and closeness” to the people of France following the devastating April 15 fire at Notre Dame Cathedral, which consumed two-thirds of its 13th-century oak roof and brought down the cathedral’s 300-foot spire.

The pope said he that while he was “very saddened” by the destruction, he was also grateful to the many men and women who bravely worked to extinguished the fire.

“The gratitude of the whole church goes to all those who worked hard, even risking their lives, to save the basilica,” he said. “May the Virgin Mary bless them and support the work of reconstruction. May it be a choral work for the praise and glory of God.”

In his main talk, Pope Francis postponed a continuation of his series on the Lord’s Prayer and instead reflected on the prayers of Jesus before and during his Passion.

Recalling Christ’s prayer during the Last Supper for God to “glorify your son,” the pope explained that God’s glory was the “revelation” of his presence throughout the history of the people of Israel.

During the celebration of the Easter triduum, he said, Christians are reminded that Jesus reveals the glory of God — which “is all love: pure love, maddening and unthinkable, beyond all limits and measure” — through his death on the cross.

“Let us ask the Father to remove the veils from our eyes so that in these days, looking at the Crucified One, we can accept that God is love,” the pope said. “How many times do we imagine him as master and not as father, how many times do we think he is a severe judge rather than a merciful savior!”

In the garden of Gethsemane, the pope continued, Jesus prays to God in the moment of “fear and anguish” before his impending death. His prayer is a lesson for Christians that “teaches us to embrace the Father because in prayer to him, there is the strength to go on.”

Even at the hour of death, Pope Francis said, Jesus’ prayer to forgive those who crucified him “breaks the cycle of evil” through forgiveness, which “frees our hearts and heals us from within.”

“To truly celebrate Easter, not only through the (liturgical) rites but also in our lives, let us hurry — if we have not yet done so — to receive the embrace of the Father in confession,” the pope said. “That is the source of the joy of feeling loved as well as the strength to forgive those who have hurt us.”

PREVIOUS: Pope’s Way of Cross will shine light on women ‘crucified’ by traffickers

NEXT: The French in Canada find meaning of faith in cathedral blaze