Word of God must be ‘beating heart’ of church, pope says 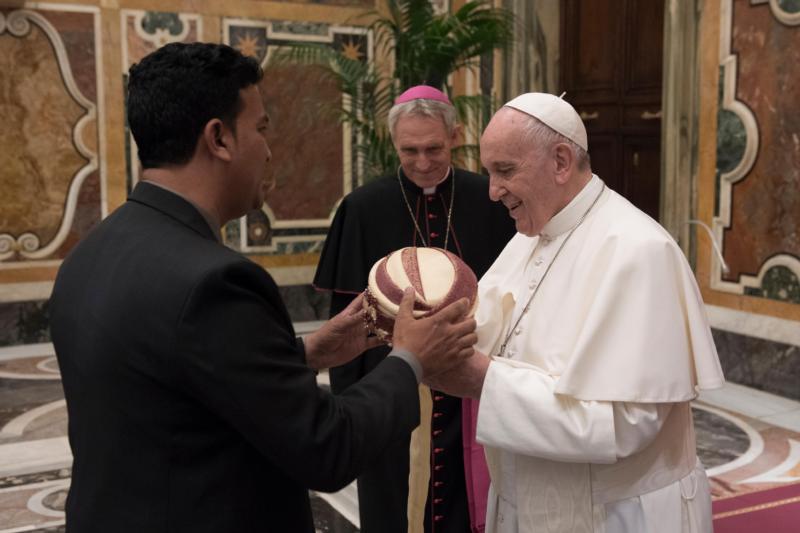 Pope Francis is presented with a turban during a meeting April 26, 2019, at the Vatican with members of the Catholic Biblical Federation. At center is Archbishop Georg Ganswein, prefect of the papal household. (CNS photo/Vatican Media)

VATICAN CITY (CNS) — Reading the Bible and praying with it is “the best vaccine” against Catholic communities closing in on themselves or focusing only on self-preservation, Pope Francis said.

God wants “a church that does not speak from itself or about itself but has in its heart and on its lips the Lord and draws daily from his word,” the pope told members of the Catholic Biblical Federation.

Greeting 200 federation members from 68 countries April 26, Pope Francis said that when Christians basically proclaim themselves instead of Jesus, they transmit nothing to the world.

“It is the word of God, not our own,” he said, and “it removes us from being at the center, saves us from self-sufficiency and triumphalism and calls us continually to go out.”

The Catholic Biblical Federation, which is celebrating its 50th anniversary, was founded to make the Bible more accessible to Catholics and to highlight “the central role of the Word in faith and mission,” Philippine Cardinal Luis Antonio Tagle of Manila, president of the federation, told Pope Francis.

The teaching of the Second Vatican Council, reaffirmed by then-Pope Benedict XVI in his 2010 exhortation “Verbum Domini” (“Word of the Lord”), Cardinal Tagle said, asks individual Catholics and the whole church if the word of God really inspires and guides their view of the world, pastoral priorities and use of resources.

“If the word of God does not inspire all of these ecclesial actions, then where does the inspiration come from?” the cardinal asked. “It’s not a rhetorical question.”

Agreeing, Pope Francis said, “it would be beautiful if the word of God increasingly became the heart of every church activity, the beating heart that gives life to the members of the body.”

As Ephesians says, “The word of God is life,” the pope reminded the federation members. “It neither dies nor even grows old,” and when it is the foundation for all the church says and does, it keeps the church young, too.

“The Bible is not a beautiful collection of sacred books to be studied; it is the word of life to be sown, the gift that the risen Lord asks us to welcome and distribute so that there would be life in his name,” the pope said.

The Bible gives the church a constant and necessary “injection of life,” he said, which is why homilies based on the Scripture readings at Mass are so important.

“Preaching is not a rhetorical exercise or a collection of wise human ideas,” he said. Rather, through the inspiration of the Holy Spirit, it is a sharing of “the divine word that touched the heart of the preacher.”

“So many words pour into our ears each day, transmitting information and giving us multiple inputs, so many — perhaps too many — that they often surpass our ability to take them in,” he said.

“But we cannot do without the word of Jesus, the only word of eternal life,” the pope said.

God’s word, he said, should not leave people serene, but should cause them to question and to seek. And “a church that lives by listening to the word is never content with its own security. It is docile to the unpredictable newness of the Spirit.”

A church enlivened by the word, he said, “never tires of proclaiming, never gives into disappointment and never tires of promoting communion, because the word calls people to unity and invites each one to listen to the other.”

Pope Francis prayed that in sharing the Bible with others, federation members would be filled with the enthusiasm of the disciples immediately after the Resurrection. “They all run: the women, Peter, John, the two on the road to Emmaus — they run to encounter and proclaim the living Word.”