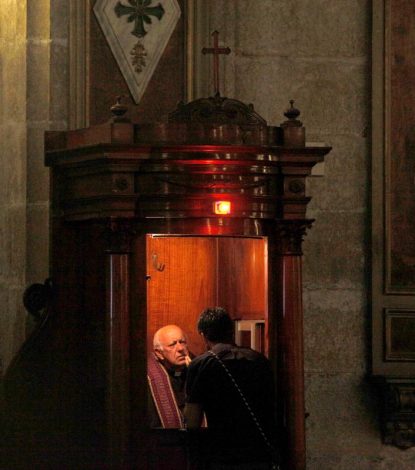 Chilean Cardinal Ricardo Ezzati hears confession at the Santiago cathedral Feb. 17, 2013. Chilean bishops said that while they support legislation requiring priests and religious authorities to report crimes, they also fear that an update to the country’s current law would force clergy to break the sacramental seal of confession. (CNS photo/Ivan Alvarado, Reuters)

VATICAN CITY (CNS) — Chilean bishops said that while they support legislation requiring priests and religious authorities to report crimes, they also fear that an update to the country’s current law would force clergy to break the sacramental seal of confession.

The 155-member Chilean House of Representatives unanimously approved a measure April 23 that would add clergy and religious men and women to the list of police, members of the armed forces, teachers and civil servants who are obliged to report all crimes under article 175 of Chile’s penal code.

However, the House of Representatives also rejected a proposal that would exempt crimes reported during the sacrament of confession. The measure will now be debated in the Senate.

Bishop Luis Fernando Ramos, secretary general of the Chilean bishops’ conference, told Chilean news site La Tercera that while the church supports laws that will ensure justice to victims of abuse, rejection of the amendment presents a “serious difficulty” because confession “is a sacrament and, consequently, an act of worship that is protected by Chilean law, specifically the penal code.”

Bishop Juan Ignacio Gonzalez of San Bernardo said that although the law is a “positive” step, legislators must also “safeguard the beliefs and the consciences of people, which is one of the most fundamental human rights.”

“The sacrament of confession always implicates the right to safeguard the identity of the person who comes, and he or she knows that nothing said can be communicated to anyone under any circumstance,” Bishop Gonzalez told La Tercera.

Father Ricardo Morales, apostolic administrator of Puerto Montt, said that priests cannot “violate the conscience of a person who manifests his or her sins before God.”

However, he added, priests have the tools so that “a person who confesses a situation of abuse of a minor, for example, is not given absolution or not forgiven unless they report the crime” to authorities.

The updated law was first proposed in 2018 after Pope Francis wrote to Catholics in Chile expressing shame for the church’s failure to listen to and defend survivors of clerical sexual abuse.

In the letter, the pope denounced the “culture of abuse and cover up” that not only allowed sexual abuse to occur but also “considered a critical and questioning attitude as betrayal.”

Rep. Raul Soto, main sponsor of the updated law, told La Tercera that the proposal to exempt offenses reported in confession was rejected to emphasize the responsibility of religious authorities to report crimes and that priority must be given to victims.

“I believe that there is a very strong political majority that considers that, even under the seal of confession, there should exist the obligation to place all evidence at the disposal of the criminal justice system,” Soto said.

According to the Code of Canon Law, the seal of confession “is inviolable,” and it is absolutely forbidden for a confessor to betray in any way a penitent in words or in any manner and for any reason.

Pope Francis made it clear that the privacy of one’s conscience before God, also known as the internal forum, must always be protected in the sacrament of confession.

In a speech to priests and seminarians attending an annual conference on the internal forum March 29, the pope said that the use of information obtained in confession to influence external decisions was “a sin against the dignity of the person who trusts the priest, who reveals his or her reality in asking forgiveness.”

PREVIOUS: Word of God must be ‘beating heart’ of church, pope says