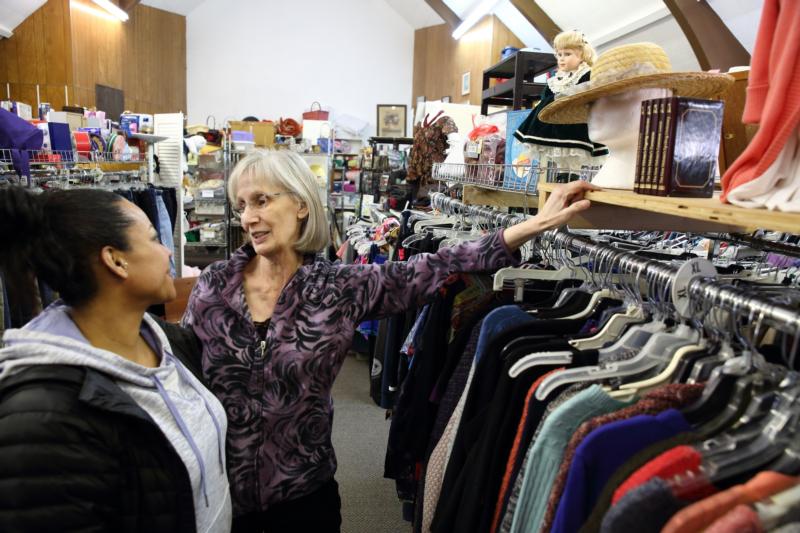 ANCHORAGE, Alaska (CNS) — Of all the designer clothes, quirky conversation pieces and valuable antiques that have rotated through the thrift shop, Archangel Attic, maybe the greatest treasure to come from this modest Anchorage shop is the $1 million it has made for Lumen Christi High School in Anchorage.

Store manager Mary Manes initially was dubious last fall when her husband speculated that they’d probably raised over $1 million via the thrift shop, which along with the school is a ministry of St. Benedict Church in Anchorage.

“I said, ‘Nah, no way!’ So we looked into it and asked in the (parish) office, and realized how close we were to that goal,” Manes said. “It’s just amazing how much that little store generates.”

“They projected that they would achieve $1 million in February, and they were right on target,” said St. Benedict pastor Father Tom Lilly. “I was stunned. We get the cash bag each day with the proceeds of the day and lock it up to be deposited and that just quietly goes on without much notice.”

Operated entirely by a cadre of devoted volunteers, including many retired grandmas, the nonprofit has no overhead except utilities and thus gives 100 percent of income to the school. Father Lilly recognized 30-some past and present volunteers at a special banquet in April to celebrate the $1 million milestone and extraordinary contribution to the parish school.

The small plain building belies the curiosities inside. It originated as St. Juliana Church in Spenard, which in the 1960s was transported to its current location, where it was renamed and served as St. Benedict Church until the parish outgrew it. When the new St. Benedict Church opened on the same property in 1979, the old church building was utilized for religious education and youth gatherings and eventually was converted to the Rummage Room, a thrift store that was eventually abandoned until the Manes looked into reviving it around 2006.

“Whatever was donated was put out for sale; you couldn’t even move in there, it was so jam-packed,” Manes said, adding that there were bins of clothes and dressers and baskets everywhere.

Manes, an experienced thrift store volunteer, disposed of damaged items, donated much of the clutter, acquired new flooring and shelving sponsored by the Knights of Columbus and started merchandising.

The former church’s cry room is now the donation intake area; the old confessional is the business office; the sacristy stores out-of-season holiday items; and where the altar once stood is a display of assorted knickknacks. Customers occasionally point out the spot where they were married or their children were baptized.

For six years, Manes sustained Archangel Attic with limited volunteers and business hours, raising about $30,000 a year for the parish school.

Colleen Larson, then acting principal of Lumen Christi, said she could see the place was a gold mine, especially when the school’s parents were constantly fundraising.

“I thought if I could just get in there and help out, what we could do with it,” she said.

After filling in three years as Lumen Christi principal, Larson retired again and seized the opportunity to step up as Archangel Attic’s volunteer coordinator and co-manager. With additional volunteers, they extended the hours to include more evenings and Saturdays. The annual proceeds surged accordingly, reaching over six figures in recent years.

“I really liked the parish, and it was something to do. I wanted to make money for the school and make some friends,” she said. “It turned out to be a lot stronger mission.”

Larson and Manes, like their core volunteer staff, are motivated to serve the marginalized of society whether to provide affordable clothing and household goods or lend a compassionate ear during trying times. For clothing, which always is in high demand, they offer an ongoing deal to fill an eight-gallon bag to the limit for $20. Specific needs are mysteriously fulfilled though a phenomenon the volunteers refer to as “declaring it” — which is when customers say they are seeking a particular item that isn’t in stock and it is inexplicably donated within about a week.

“Our volunteers just seem to have the spiritual side of this down,” Larson reflected. “This ministry is like part of a divine plan; it always works out; it’s just blessed.”

Johnson writes for the Catholic Anchor, archdiocesan newspaper of Anchorage.

NEXT: Parish near Colorado school shooting responds with prayer, counseling