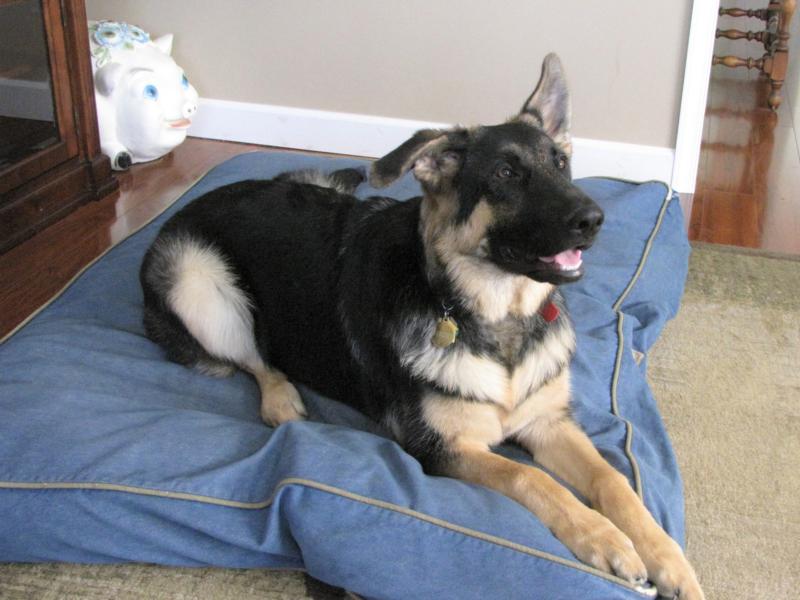 Mugsy, a friendly 5-month-old German Shepherd, goes to Mass with his trainer, Cheryl Matczak, at St. Jude the Apostle Parish in Lewes, Del., as part of his training to be a guide dog for blind. (CNS photo/Michael Short, The Dialog)

LEWES, Del. (CNS) — Every Sunday morning, Mugsy is a familiar sight at St. Jude the Apostle Church in Lewes.

The young German Shepherd sits in a corner in the back with his trainer Cheryl Matczak. Mugsy, a friendly 5-month-old, sits quietly, walks forward with Cheryl when she takes Communion and quietly returns to his corner.

He is quieter than many parishioners and his cellphone never rings during the homily.

The handsome young dog, usually with one ear flopped over, is a guide dog in training for Guiding Eyes for the Blind, a New York-based group that places the dogs with people who need their help.

Cheryl is a “puppy raiser” for the organization, which means she rears the dogs for about 16-18 months, getting them used to noise, lights and people. They learn not to climb on the furniture, eat out of the garbage or chase the stray squirrel.

By the time she’s done, they are socialized, well-behaved and ready for the next step. It’s a sort of canine charm school, which gives them what she calls a “foundation.”

By the time they are paired with people, they will have become used to grates, elevators, vacuum cleaners and perhaps even the bustle of Times Square in New York City.

Dogs are placed individually with factors considered including how fast the person walks, whether they live in the city and whether the person takes the bus.

Most guide the blind, but others work with law enforcement or go into a breeding program. Matczak, with some help from husband Don, has raised 22 dogs. One, Margie, worked at the Salt Lake City Olympics. Another, Rodney, is searching for explosives in Thailand. “They go all over,” she told The Dialog, newspaper of the Diocese of Wilmington.

Another dog named Ike works with a boy with autism. “Now he’s the cool kid with the dog and that’s worth a million dollars,” she said.

She brings Mugsy to St. Jude because it is one more chance for him to get used to being around people. She sits quietly in the corner, in a wheelchair reserved for her, with him at her feet.

Mugsy attracts a lot of attention, especially from the youngest parishioners, but people quickly learn not to pet him during Mass when he’s in training.

It’s like working guide dogs, who should not be petted while they are working.

“Taking him to church, he has to be quiet,” she said. “People respect him and he respects them.”

“He’s a puppy with a purpose, to be someone’s eyes, to give them independence and to be their best friend, just like he’s my best friend,” she said. “They literally teach them to walk in traffic. … One day, he might save someone’s life. That person is literally putting his life in his hands.”

Matczak never wants to be a distraction and she told the parish staff that she didn’t need any special efforts. “Just put me in the back in a corner and I’m good,” she said.

There are a lot of rules for Mugsy to learn. But Matczak bristles a bit when people say he’s not allowed to be a dog. “He runs in the yard. He plays in the house. When he’s here, he’s a dog,” she said.

Cheryl and Don dote on their animals and the affection is obvious. Mugsy lives with two other dogs and a very large basket of dog toys, although the other two dogs are pets.

He goes to the post office, the library and often to schools to teach people about guide dogs. “I will hear kids say, ‘Mom, you can’t pet that dog because he’s working,'” she said.

The dogs are prepared almost from birth with regular handling, massage, blankets, exposure to lights and noise and regular human contact. Trainers get the dogs when they are about 8 to 10 weeks old.

Most dogs work nine to 10 years and then become pets. There are nowhere near enough animals or puppy trainers to handle the demand, she said.

The trainers often attend graduations and sometimes stay in touch with the people partnered with the dogs. They speak about the dogs much like a parent with a child. “It’s pride. It’s a sense of accomplishment. It’s a pride in what the dog has become,” Don said.

“It makes you realize everything you did is for a purpose,” Cheryl said.

Short is a correspondent for The Dialog, newspaper of the Diocese of Wilmington.

NEXT: Alaska thrift shop raises $1 million for a Catholic school