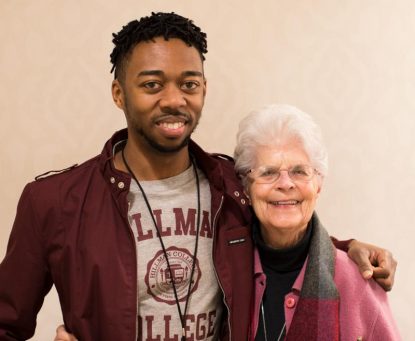 BALTIMORE (CNS) — Anthony Newman can attest to the change Notre Dame Mission Volunteers-AmeriCorps can make in the lives of young people.

Newman was a massage therapist in Virginia in 2011 and wanted to do more to help people when he heard about the program from a friend. He joined for two years teaching at a community center in Baltimore, then stayed in the same neighborhood for another four years as a youth coordinator for another nonprofit. He is now a racial equity consultant in Baltimore.

“I didn’t have experience, and they took a chance on me. I learned about how many skills and strengths I didn’t know I had because there was an opportunity to be creative, to try stuff, to mess up,” said Newman, who in 2015 was invited to join the Notre Dame Mission Volunteers board and is now in his second term. “I can’t think of another place where I would be able to grow and bring my unique self to something I was so passionate about.”

He calls Sr. Barbara (“Bobby”) English, then the site director for Notre Dame Mission Volunteers-AmeriCorps in Baltimore, his “superhero,” saying he feels “honored” to have been able to work with and be mentored by one of the sisters regularly.

In Notre Dame-AmeriCorps, members, most of whom are in their 20s, spend 11 months serving in a variety of individual and small-group teaching, tutoring and other programs. In exchange, they receive a stipend for living allowances, help with student loans through AmeriCorps, a wealth of new skills and, often, a lifetime appreciation for service.

“There’s a transformative nature of the work,” said Sister Judi Clemens, president of the Notre Dame Mission Volunteers board. “It’s not just cranking out services. The people who engage in this work are personally transformed. Their lives are changed forever.”

Notre Dame-AmeriCorps now has more than 400 members in about 200 locations in 25 cities around the United States, up from 46 members in four cities when it first partnered with AmeriCorps in 1995 and the half-dozen volunteers when Notre Dame Mission Volunteers started in 1992.

“You have to think fundamentally: What is your goal?” Corr said. “It is to expand our work with the poor, to have people be in touch with their God-given dignity and potential.”

While AmeriCorps partners with other faith-based organizations, their partnership with the Sisters of Notre Dame de Namur is the only one directly with a Catholic women’s religious congregation. It is also one of its longest-running, said Samantha Jo Warfield, spokesperson for the Corporation for National and Community Service, the independent federal agency for volunteering and service that oversees AmeriCorps.

“It shows innovative thinking on the part of the sisters,” she said. “They’re in the communities. They see the need year in and year out and see the potential that AmeriCorps can give. It helps them build capacity for what they are doing and gives them an influx of new energy, of people wanting to change the community, change the country, change the world under the direction of these wise women.”

Sisters are vitally involved in Notre Dame Mission Volunteers-AmeriCorps. Two Sisters of Notre Dame de Namur serve as site directors, and dozens of sisters provide support to the program, the congregation’s only national ministry. They serve as mentors for members and staff and on the board of directors, hold leadership roles at service locations, and some have even participated as volunteers themselves.

The sisters “have taught us that a lifetime of service is a series of commitments to those who are most in need,” Adrienne Andrews, executive director of Notre Dame Mission Volunteers, said. “The sisters’ belief that education is the central tool in the struggle for dignity is the foundation” of the program.

That focus on education drew Andrews to Notre Dame Mission Volunteers-AmeriCorps, first as a volunteer, then as a staff member since 2006. She was named executive director in 2016 as Corr developed the Haiti program.

Andrews said she herself is an example of someone whose life was changed because of a year of service.

After graduating from Case Western Reserve University in 2004, Andrews was looking for a service opportunity that was loosely faith-based. She had grown up in working-class Youngstown, Ohio, and remembers being struck in high school by the disparities in educational opportunities in the area.

She found the Notre Dame-AmeriCorps program online in the fall of 2004, interviewed for the program and a week later moved to Watsonville, California, where she served through July 2005 tutoring high school students.

Wanting to extend her connection with the program, Andrews was hired at the Notre Dame Mission Volunteers-AmeriCorps office in Baltimore and spent 11 years doing every job in the office: program management, data collection, and the complicated financial and administrative tasks needed to oversee the AmeriCorps grants. She also learned about accounting, budgeting and maintaining relationships.

And her initial passion hasn’t waned.

“Every child should have access to an education that helps them reach their God-given potential,” she said. “The quality of service opportunities and the number of people who shared this common mission continue to inspire me.”

She said she sees additional potential in growing the number of volunteers and other religious congregation and organization partners. Most members sign up directly through Notre Dame-AmeriCorps, but members also come from more than a half-dozen other religious congregations and Catholic organizations. Notre Dame Mission Volunteers partners with these organizations to administer the AmeriCorps grant portion of their programs, which allows their volunteers to receive AmeriCorps benefits.

Andrews hopes more congregations and organizations will see the model “as a way to continue and grow their ministries.”