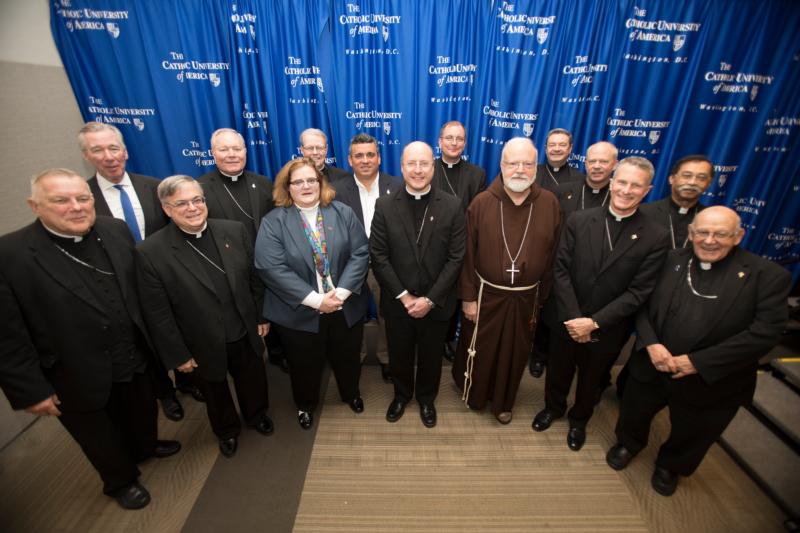 Abuse survivors Teresa Pitt Green, and Luis Torres Jr., center, pose May 1, 2019, with John Garvey, president of The Catholic University of America, back left, and U.S. prelates, at the university in Washington, . (CNS photo/Bob Roller)

WASHINGTON (CNS) — During the last days of April, a section of the student hub on the campus of The Catholic University of America in Washington displayed a gallery of tales of pain but also of recovery and healing featuring Catholics from around the country who had experienced sex abuse by clergy. They were men and women, younger and older, of various ethnicities — profiles of Catholics who had survived torment by trusted members of the church but who also were helped to recover by Catholic communities of faith.

On May 1, just behind the walls where the tales of abuse and healing were on display, a small group of Catholics just like the ones in the stories gathered with bishops, clergy, victim advocates and others for a daylong event on the sex abuse crisis in the Catholic Church, but also to acknowledge the pain caused, to offer comfort, express sorrow, to share a meal, to pray and extend the wish to heal a broken trust.

“To see the bishops up on a platform with survivors having a discussion in front other people … my hope is that it was the beginning of a lot more conversation between leadership and survivors,” said Kathleen Chastain, a victim services coordinator from the Office of Child and Youth Protection for the Diocese of Kansas City in a May 2 interview with Catholic News Service.

Though the bishops gathered had heard the testimony of the two survivors before — at their annual meeting in November in Baltimore — the May gathering placed them together on a stage to dialogue, a back and forth of questions and answers, a sharing of experiences, which occasionally included an outpouring of painful memories during an event titled “Pushing back against the darkness,” an effort that came about with coordination by Catholic University, members of the survivor group Spirit Fire, and the U.S. Conference of Catholic Bishops.

Survivors spoke of the abuse and its byproduct on the lives of those who’ve been abused, including broken relationships, lack of trust, depression, addictions and how it distances some of them from what they treasure most as Catholics: the Eucharist.

Some bishops spoke of the pain they, too, had felt when they arrived at dioceses where sex abuse had taken place and how they grappled with the suffering of the families as well as the pain of faith communities reeling from the events. Some admitted that in the past, it wasn’t a situation that the seminary and other training they had received, had prepared them to face.

More than a dozen bishops, including Boston Cardinal Sean P. O’Malley and Miami Archbishop Thomas G. Wenski, took part in the event, which included a private meeting between the prelates and a small group of survivors who attended and whose discussion was not open to other attendees.

In a May 6 interview with CNS, Bishop W. Shawn McKnight of Jefferson City, Missouri, who took part in the private meeting, said a family member attended the event, bringing to the forefront the full weight of what abuse does: it negatively affects more than the survivor. It affects family members and friends who later wonder whether they could have prevented it, he said.

The daylong meeting, Bishop McKnight said, was “more of a family meeting,” and “much more human, and having to do with the heart and mind,” rather than discussing policy, or how to approach the problem institutionally — the focus of many meetings that have taken place among bishops.

“One of takeaways I got from it was the importance of listening,” he said. “We have to be more aware that it is not simply our responsibility to conduct a formal canonical process. We’re also supposed to be pastors.”

In a May 2 interview, Deacon Bernie Nojadera, executive director of the USCCB’S Secretariat for Child and Youth Protection, said that though many bishops regularly meet with survivors in their dioceses, those meetings are private. But such national meetings like the one that took place in Washington can serve as a model for future events, showing the possibility that the higher rungs of the church can actively participate in the healing of a broken trust, Deacon Nojadera said.

“This can work,” he said. “In the end, the dream is that the church can be healthier and holier.”

Bishops sat at tables with survivors, ate lunch together, and participated in small group discussions with one another following panel discussions.

Some bishops spoke of their efforts to walk with those who have been abused during their journey toward recovery, of trying to reassure survivors of their worthiness and of Christ’s love. But that’s not always an easy message to get across to those facing deep trauma. Victim advocate Chastain said the meeting was like no other, watching the willingness of the bishops to meet in such a public way with those who’ve been hurt by a group they’re associated with.

“To have them be in a room with individuals who have been harmed and you’re representing that harming party … it’s making yourself vulnerable,” said Chastain.

Conventual Franciscan Father Jude DeAngelo, university chaplain and director of campus ministry at Catholic University, said he watched as the bishops shared their stories with the survivors, of how they tried to reach out to those who had been harmed.

“It was really helpful to me as a priest to see bishops who have worked hard to bring survivors back into the church,” to heal the wounds and to have communities of faith participate in that process, he said.

“It’s very important, not just for the bishops, but for the entire church to hear these stories and to learn not only about the devastation that the abuse caused, but the cover-up, and the resilience of these people and their love for the church,” Father DeAngelo said. “They’re the first step in helping the church.”

“We have to enter into uncomfortable situations to bring about the healing,” he added.

In his remarks opening the meeting, Catholic University President John Garvey said that like other Catholics, he, too, had been grappling since last year with the emotions he had to face after accusations that former Washington Cardinal Theodore E. McCarrick had abused children and seminarians, and later with the Aug. 14 release of a Pennsylvania grand jury report on clergy sex abuse in some parts of the state.

“We often hear how important it is to listen to the voices of survivors. The reason is that their testimony makes the problem real. And that, in turn, can provoke anger,” he said. “Anger is not a bad thing… Like other emotions, anger can be deployed for vicious or virtuous ends. Anger can harm, but it can also help us heal.”

And healing can only take place when you take into account all who have been hurt, and that includes the families, friends of survivors, but also the parishes, said Bishop McKnight.

“That’s really touched me,” he said. “The trauma is to them, to their friends, their family members, people close to them. That’s why the whole church needs healing.”