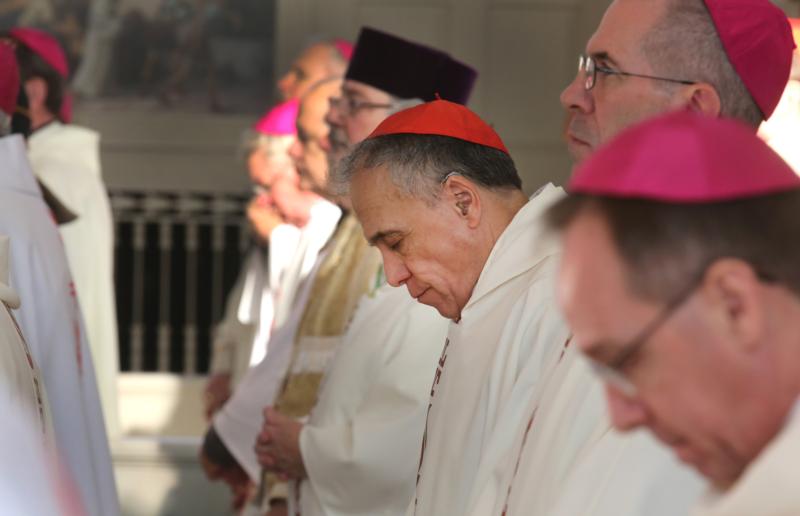 Cardinal Daniel N. DiNardo of Galveston-Houston, president of the U.S. Conference of Catholic Bishops, bows his head in prayer during Mass in the Chapel of the Immaculate Conception at Mundelein Seminary at the University of St. Mary of the Lake in Illinois, near Chicago, Jan. 3, 2019. (CNS photo/Bob Roller)

WASHINGTON (CNS) — New papal norms on preventing clergy sexual abuse are “a blessing that will empower the church everywhere to bring predators to justice, no matter what rank they hold in the church,” said Cardinal Daniel N. DiNardo of Galveston-Houston, president of the U.S. Conference of Catholic Bishops.

The new juridical instrument “calls for the establishment of easily accessible reporting systems, clear standards for the pastoral support of victims and their families, timeliness and thoroughness of investigations, whistleblower protection for those making allegations, and active involvement of the laity,” Cardinal DiNardo said May 9.

The new document, given “motu proprio,” on the pope’s own initiative, was titled “Vos estis lux mundi” (“You are the light of the world”). Cardinal DiNardo praised it for leaving latitude for national bishops’ conferences, such as the USCCB, to specify still more to account for their local circumstances.

“It also permits the church the time and opportunity to bring spiritual healing,” he said.

The document, which takes effect June 1, clarified norms and procedures for holding bishops and religious superiors accountable in protecting minors as well as in protecting members of religious orders and seminarians from abuse. It was meant to help bishops and religious leaders around the world clearly understand their duties and church law, underlining how they are ultimately responsible for proper governance and protecting those entrusted to their care. It establishes a clearer set of universal procedures for reporting suspected abuse, carrying out initial investigations and protecting victims and whistleblowers.

“The Holy Father said a ‘continuous and profound conversion of hearts is needed, attested by concrete and effective actions that involve everyone in the church.’ Pope Francis was clear that this responsibility ‘falls, above all, on the successors of the apostles.’ As part of this responsibility, bishops also will be held accountable under the authority of this ‘motu proprio,’ which covers sexual abuse of minors or vulnerable persons, sexual acts compelled through the abuse of authority, and any cover-up of such crimes.”

The cardinal said Pope Francis “made clear that protection and healing must reach all of God’s children. Following on the meeting just two months ago of all episcopal conference presidents, the ‘motu proprio’ shows Pope Francis expects swift and comprehensive progress. For the church in the United States, the task before us now is to establish whatever is necessary to ensure the effective implementation of the ‘motu proprio.’ Our committees have already begun the work of preparing implementation measures for deliberation at the USCCB plenary assembly in June.”

He noted the United States already had in place “the excellent foundation of the USCCB’s Charter for the Protection of Children and Young People, the Essential Norms for Diocesan/Eparchial Policies Dealing with Sexual Abuse of Minors by Priests or Deacons, and the Statement of Episcopal Commitment, all of which date back to 2002.”

“By embracing the painful experience of survivors and working on these new protections, let us pray we continue to grow into a stronger church,” he said.

The U.S. bishops had planned to vote on their response to the clergy sex abuse crisis proposals during their November meeting but, at the urging of the Vatican, they did not.

Cardinal DiNardo told the bishops that the Vatican wanted them to delay votes — on proposed standards of episcopal conduct and the formation of a special commission for review of complaints against bishops for violations of the standards — until after a February meeting with the pope and presidents of the bishops’ conferences around the world on addressing clergy abuse.

The Associated Press reported Jan. 1 it had obtained the letter written Nov. 11 by Cardinal Marc Ouellet, prefect of the Congregation for Bishops, to Cardinal DiNardo, asking that the votes be delayed.

“Considering the nature and scope of the documents being proposed by the (conference), I believe it would have been beneficial to have allowed for more time to consult with this and other congregations with competence over the ministry and discipline of bishops,” Cardinal Ouellet wrote.

At the end of the February summit on protection of minors, the Vatican promised to take action, including how bishops and religious superiors should handle abuse allegations and how they should prepare the relevant documents for the doctrinal congregation when an accusation is found to be credible.

NEXT: In Washington, refugees from around U.S. lobby for federal program