In Washington, refugees from around U.S. lobby for federal program 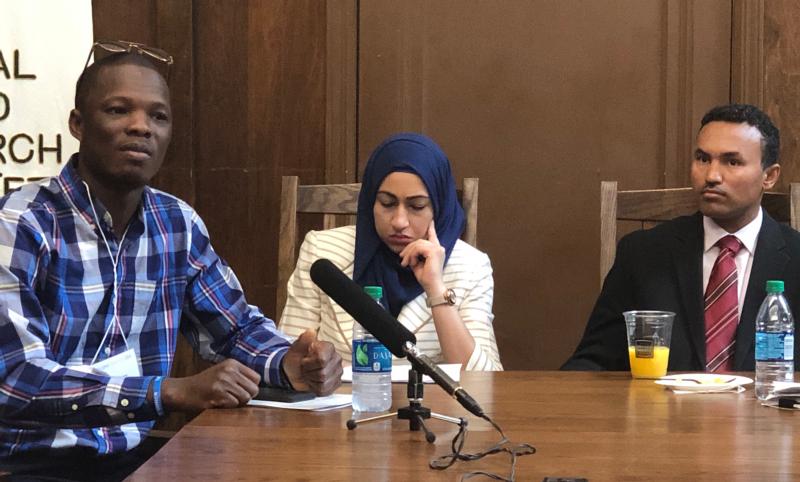 Dauda Sesay, left, along with other former refugees now resettled in the United States, speaks May 8, 2019, at the United Methodist Building in Washington about the need to increase refugee admissions to the United States. Sesay along with other former refugees lobbied lawmakers May 8 and 9 to increase admissions to the U.S. Refugee Admissions Program to 75,000 for the 2019 fiscal year. (CNS photo/Rhina Guidos)

WASHINGTON (CNS) — The U.S. Refugee Admissions Program is one of the best of humanitarian efforts helping vulnerable people in the world and it should be praised as a success story, not diminished, said a former Iraqi refugee to the U.S., who joined many others in Washington in early May lobbying lawmakers to increase the number of refugees admitted to the country each year.

“The U.S. should promote it proudly,” not whittle its numbers, said Zaid Alibadi, a former interpreter for the U.S. Army and U.S. embassy in Iraq, whose life was put at risk because of his work with the United States while in Baghdad and who used the refugee program to relocate to the U.S. to seek safety.

Alibadi, now living in South Carolina while earning his doctorate, spoke to members of the press in Washington, just before joining other former refugees visiting members of Congress on Capitol Hill May 8 and 9 asking lawmakers to increase refugee admissions for upcoming fiscal year to 75,000 instead of the present 30,000 set by the Trump administration.

Refugee advocacy organizations, such as the faith-based Church World Service and the U.S. Conference of Catholic Bishops’ Migration and Refugee Services, facilitated the May 8 press event where men and women who were resettled to the U.S. spoke of the hardships that forced them to leave their native lands and the welcome they received in their new communities.

Some like Alibadi risked their lives at home because of their work with the U.S. Others, such as Deborah Balirane Jane, left home after suffering an acid attack in her native Uganda, or like native-Somalian Mustafa Nuur, after witnessing violent attacks on family members. All of them took to the halls of Capitol Hill for Refugee Advocacy Days 2019 to tell their stories, of the hardships and the successes, and how the refugee program gave them an opportunity to rebuild their lives. Among some of the refugees who spoke were some who have joined and served in the U.S. Army.

Tecle Gebremicheal, originally from Somalia, spoke of being sent through the refugee program to Boise, Idaho, a place he’d never heard of, but a city he now calls home, where he has been able to obtain his U.S. citizenship, go to college, and where he eventually wants to run for city council.

Refugees are civic-minded and want to help contribute to the U.S., make positive changes and give back to the communities that have welcomed them, he said. Those stories shouldn’t be lost among the rhetoric that paints refugees as terrorists or otherwise, he said.

Some like Nasser Alsaadun, who helped interpret for military members of the U.S. as well as the United Kingdom in his native Iraq, acknowledged that an uneasy narrative has been painted about refugees nationally and also on social media. However, local communities that welcome refugees know the reality, he said.

“Despite false allegations, we have good relationships with our local communities,” Alsaadun said.

Dauda Sesay, originally from Sierra Leone, for example, said he received a great welcome and made new friends in his new home of Baton Rouge, Louisiana, the place he landed after several years in a refugee camp after escaping an attack that left his father and his younger sister dead when he was 16.

Now married with two children and with a job as a technician at The Dow Chemical Company, he credits the welcoming environment of Baton Rouge and the refugee program for helping him forge a bright future.

“It saved my life,” he said of the U.S. refugee program. “I do appreciate the second chance at life. We want to give our best to the nation.”

The lobbying efforts in May were aimed at getting that message across to Congress. That’s because under the Trump administration, refugee resettlement numbers are at an all-time low, said Jen Smyers, director of policy and advocacy for Church World Service.

“Last year, we saw the refugee resettlement goals at 45,000, which, at the time was the lowest refugee admissions goal we’ve ever had in this country since the 1980 Refugee Act was passed unanimously by Congress,” said Smyers. “The administration didn’t even meet half that goal last year and only admitted 22,000. They have now set another low of 30,000 and they are not on track to meet that goal.”

Since the refugee program began up until the Trump administration took over, the country had been taking in an average of 80,000 refugees a year, said Smyers, with the goal of admitting 95,000.

Those who were helped by the program said those numbers represent some of the most vulnerable people in the world.

“These numbers represent human lives. They are children, women and men,” said Sesay. “We just want to raise families in a peaceful environment.”

Organizations that work with and help refugees see no better ambassadors to promote the program than those it has helped.

“The advocacy days on Capitol Hill are very powerful for both our lawmakers and our refugee leaders who are sharing their stories,” said Bill Canny, executive director of MRS. “While our organizations do everything we can throughout the years to share the stories of our refugee leaders, the staff on the hill and the members of Congress walk away with a different feeling after listening to the stories from those who lived them.”

Arguments against allowing more refugees into the country include allegations that they put a strain on public resources. However, a study released May 9 by the Center for Public Integrity found that “between 2005 and 2014, refugees and asylees here from 1980 on contributed $63 billion more to government revenues than they used in public services.”

NEXT: Thousands gather in Times Square rally for human life