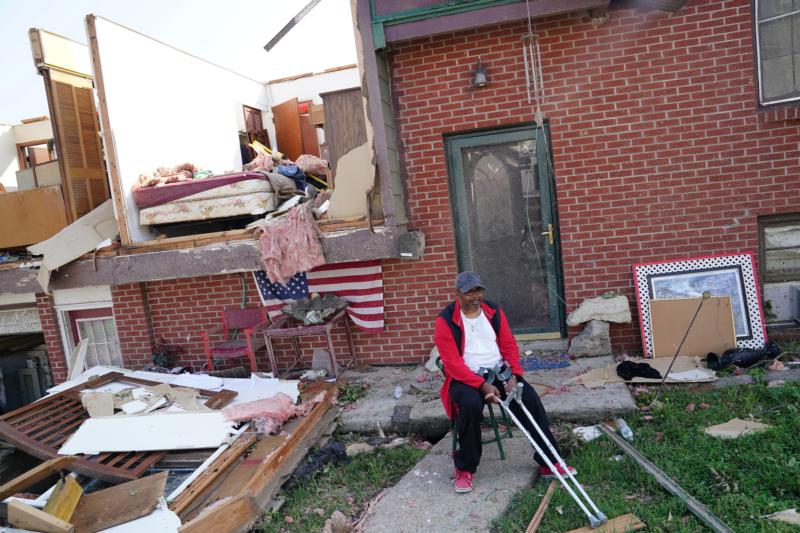 A man sits outside his destroyed home May 23, 2019, following a tornado in Jefferson City, Mo. An outbreak of strong storms the evening of May 22 spawned tornadoes that razed homes, flattened trees and tossed cars across a dealership lot, injuring about two dozen people in Missouri’s capital city and killing at least three others elsewhere in the state. (CNS photo/Carlo Allegri, Reuters)

JEFFERSON CITY, Mo. (CNS) — Bishop W. Shawn McKnight of Jefferson City expressed gratitude that lives were spared and that all residents of the Missouri capital are accounted for following a devastating tornado.

He said in a May 23 statement that the staff of Catholic Charities of Central and Northern Missouri were assessing the needs of residents. Some people were forced from their homes as the storm swept through the city of 43,000 just before midnight May 22.

Diocesan offices on the west side of Jefferson City and Catholic parishes around the town were unaffected by the storm.

“Please continue to pray with us, for those who have suffered from this natural disaster and also for those who are coming to their assistance,” Bishop McKnight said.

The most severe damage occurred in a three-square-mile area south and east of the central part of the Missouri capital, Jefferson City Police Lt. David Williams told reporters.

About 40 to 45 people were being housed the afternoon of May 23 in a school on the west side of the city, authorities said.

Homes, apartments and businesses lost roofs and windows. Power lines were down and trees and other debris blocked roads, hampering the initial emergency response. Some scaffolding erected around the Missouri State Capitol for renovation work was damaged, but the building escaped unscathed.

CCUSA also is weighing its response in areas of northeast Oklahoma and elsewhere, where residents have been displaced by flooding caused by days of heavy rain.

A violent line of thunderstorms that spawned the tornadoes killed three people in southwest Missouri and caused minor injuries to at least 20 people in Jefferson City, authorities said. Some people in the capital were trapped in their homes or apartments and had to be assisted by safety forces.

NEXT: Bishop of Rapid City, South Dakota, to head Diocese of Saginaw, Michigan