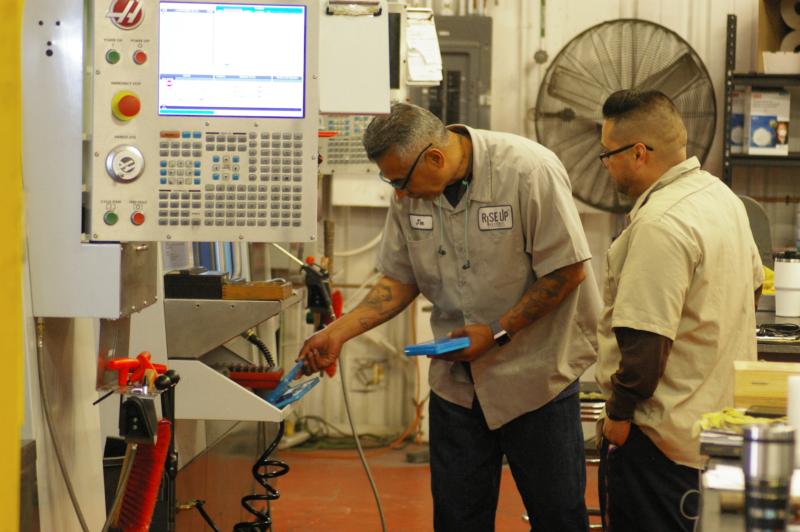 Joe Tapia, a senior member at Rise Up Industries, demonstrates to Josue Felix, a new member, how to set up the CNC mill for operation in Santee, Calif., March 7, 2019. Former gang members, including those who have been in prison, work 40 hours a week, receiving on-the-job training for a future career as a CNC machine operator. (CNS photo/Denis Grasska, The Southern Cross)

He listened with interest as the founder of Homeboy Industries, a successful gang intervention, rehabilitation and reentry program in Los Angeles, discussed his work.

Catching up with Father Boyle at the end of the talk, Gilbreath asked if anything like Homeboy Industries existed in the San Diego area. The priest replied, “No. Why don’t you start one?”

That same day, Gilbreath said, he and a group of friends began “kicking that idea around.” They ultimately decided to accept Father Boyle’s challenge, and the result was Rise Up Industries.

That mission is still a work in progress.

Gilbreath explained that, after the nonprofit received its 501(c)(3) status in late 2014, the decision was made to start with the reentry program. The idea was that the program’s participants would be “an older population, a little bit more mature and ready to make life changes.” Successful graduates of that program could then serve as inspirational speakers and role models for the youth who would participate in the gang prevention and intervention programs.

The prevention program, focusing on at-risk youth ages 10 to 18, is scheduled to launch in 2023. The intervention program, targeting current gang members who want to leave that life but aren’t sure how to do it, will follow at a date to be determined.

The 18-month reentry program is based at Rise Up Industries’ machine shop, which opened in March 2016 in Santee, a city in San Diego’s East County. Former inmates work 40 hours a week, receiving on-the-job training for a future career as a Computer Numeric Control, or CNC, machine operator. Using computer-programmed machinery, they drill, cut and shape materials ranging from bicycle parts to subcomponents for the aerospace industry.

“This career is well-paying and it’s in extremely high demand,” Gilbreath told The Southern Cross, newspaper of the Diocese of San Diego. “So, getting them placed (in jobs after graduation) is not going to be a problem.”

However, technical skills mean little if an employee has a bad attitude or poor work ethic, Gilbreath said. So, Rise Up Industries also works on that aspect of the men’s lives.

It provides the program’s participants with a mentor, a case manager and a counselor; hosts a Friday book club; regularly quizzes the men on Rise Up Industries’ core values and the “work ethics” posted on each of the shop’s five CNC machines; and gives them a weekly performance review.

Gilbreath said the program currently has a waitlist, and there’s a stack of letters on his desk from current inmates interested in joining once they are released. Though there are currently seven participants, the program has capacity for 12. He said they are working to reach that number and, by 2023, to double their enrollment to 24.

The machine shop is one of Rise Up Industries’ three “social enterprises.” The nonprofit also operates a purchasing program for individuals, churches and other organizations interested in ordering specialty coffee on a regular basis, as well as a screen printing and embroidery program that produces shirts for organizations and their special events. The net proceeds from both provide financial support for Rise Up Industries’ mission.

Gilbreath admits that the directors of Rise Up Industries were initially concerned that former gang members and prison inmates, some of whom had received life sentences, would not “tug on people’s heartstrings” enough to inspire donations to the program.

But, having heard many inmates’ stories firsthand during the course of his prison ministry, Gilbreath empathizes with them. He tends to believe that many of them never had “a fair chance,” given their difficult childhoods and the environments in which they grew up.

Each of the seven men currently participating in the reentry program have their own stories of how they came to be involved with gangs and how that involvement resulted in lengthy prison sentences.

For Manuel Chavez, joining a gang was simply “a rite of passage.”

“It wasn’t something that I had to go seek; it was right at my front door,” said the 40-year-old, who hails from Redlands, California.

His grandfather and father had gone to prison in the 1950s and 1980s, respectively. By the time he was 13, Chavez himself had already embraced the gang life.

“I probably wasn’t even a gang member more than three or four months, and I was already in juvenile hall on gun charges (and for) stealing cars,” he said.

At 16, Chavez was charged with eight armed robberies, attempted murder and murder. He spent 22 years in prison. Paroled in March 2017, he met two Rise Up Industries participants while living in transitional housing after his release. He had been interested in finding a job to make money, but they were embarking on a career path. He soon followed their lead.

“I needed a career and RUI has provided that freely,” said Chavez, who entered the program last October. “They made it their mission to reach out to people like me.”

Ernest Garcia, 46, grew up in a “nuclear family” in Pomona, with two parents and four younger siblings. There were gang members on both sides of his family, but neither of his parents had gang ties. His family life began a downward spiral when he was a preteen. His mother struggled with mental illness, his father resorted to heavy drinking as a coping mechanism, and Garcia just wanted out.

“I think I embraced the violence, even the harm that came to myself, because I just didn’t want to face what was going on in my home at the time,” said Garcia, explaining why he joined a gang.

At 17, he was sentenced to 75 years to life for the murders of three rival gang members. Once in prison, he got involved with prison gangs and, because of his continued violent behavior, he spent 18 years in solitary confinement. He began to seriously reevaluate his life in 2008 and abandoned gangs entirely in 2011.

Following his release from prison in late December 2017, Garcia was making good money working in construction. A friend who lived across the street from the construction site and would see him every day was working at Rise Up Industries’ machine shop and encouraged him to join as well.

At first, Garcia wasn’t interested because he would be trading good pay for a minimum-wage job. But his friend convinced him that Rise Up Industries would put him on a career path.

“When I came, it almost seemed too good (to be true) because people were real friendly. They smiled,” said Garcia, who joined the program in late February 2018.

Because of his supportive supervisors, Garcia said he can imagine himself running his own machine shop someday.

“By the grace of God, I was given a second chance,” he said.