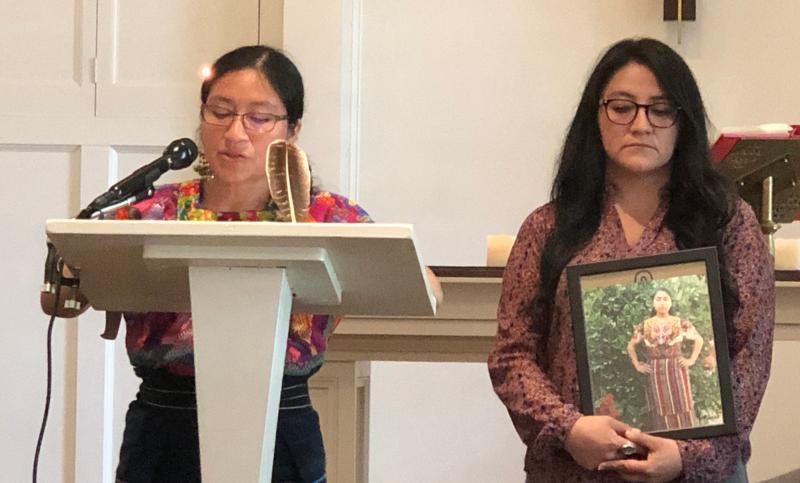 Juanita Cabrera Lopez of the International Mayan League prays May 23, 2019, during a vigil held at the United Methodist Building in Washington to remember child deaths at the U.S.-Mexico border. Catholic and other faith leaders gathered to remember at least five Central American children who have died while in the custody of U.S. immigration officials. (CNS photo/ Rhina Guidos)

WASHINGTON (CNS) — Jesus would be “indignant” and hold accountable those responsible for the deaths of at least five migrant children at the U.S.-Mexico border, said Sister Marie Lucey of the Franciscan Action Network, one several faith leaders who on May 23 participated in a vigil to remember the young migrants.

The group says the children’s deaths are the result of U.S. immigration policies and actions at the border.

“We know their names and we remember them,” said Sister Lucey, a member of the Sisters of St. Francis of Philadelphia, who joined other Christian groups, along with Jewish and Muslim religious leaders and members of their faith communities at a chapel in the United Methodist Building in Washington to talk about the deaths of Carlos Hernandez Vasquez, 16, Felipe Alonzo Gomez, 8, Jakelin Caal, 7, Wilmer Ramirez Vasquez, 2, and a 10-year-old girl from El Salvador who died last year but whose name has not been released.

Though each child died under different circumstances, they were in the custody of U.S. immigration officials at the time of their deaths.

Children should be welcomed into the U.S. with a smile, a bottle of water, snacks and a medical exam, said Sen. Jeff Merkley, D-Oregon, who attended the vigil just a few yards away from the U.S. Capitol almost at the same time that Acting Homeland Security Secretary Kevin McAleenan was testifying before the Senate Committee on Homeland Security and Governmental Affairs asking for more money from the 2020 federal budget for the agency.

That day lawmakers denied the $4.5 billion in humanitarian border aid the White House was asking be included in a federal disaster bill — it would have included $1.1 billion for border operations. Opponents of the aid said they objected because it was going to be used to increase family detention.

“At this moment, Lady Liberty’s torch burns no more,” said Merkley, adding that in the past, the country welcomed those fleeing famine, religious persecution and other dangers, much like today’s migrants at the border.

Sister Lucey asked those gathered to pray so that lawmakers would see the migrants “as human beings who need protection” and in them see “their children, their grandchildren.”

Members of Network, a Catholic social justice lobby group, read in English and Spanish a poem about a little girl who died while under the supervision of Border Patrol agents:

“Little one, you set out full of hope, still sleeping in your father’s arms, with the great dream of going to school, but you fell into the arms of the Border Patrol. Dehydrated, no water was given to you. You cried for nights and nights, surely begging for help. You came to know the supplications of Christ, ‘my God, my God, why have you forsaken me?’ And when you finally arrived at the hospital, it was too late.”

Rabbi Jason Kimelman-Block, of Bend the Arc Jewish Action, said even though “we were too late for Carlos, Wilmer, Jakelin, too late for Juan,” it was important to urge action “to stop this cruelty” and contact congressional representatives on behalf of other children in danger at the border.

Juanita Cabrera Lopez, of the International Mayan League, also remembered 20-year-old Claudia Gomez, an indigenous woman from Guatemala who was fatally shot by a Border Patrol agent last year. She said that as religious leaders were participating in the vigil, Gomez’s family was at a Mass in Guatemala, marking the anniversary of her May 23, 2018, death. Like Carlos, Felipe, Jakelin, Juan, the indigenous Guatemalan children who died under federal custody at the border, Gomez, too, was part of an indigenous community, people who often face discrimination, racism, and lack of opportunities at home, Cabrera said.

“Each indigenous child was forced to migrate because they are the most affected by centuries of structural inequality and discrimination in Guatemala,” she said.

She asked the members of religious organizations in the room “to continue to stand with the Maya peoples and act from a place of compassion, humanity, dignity and truth as we demand answers, accountability, and justice for our children. We must stand on the right side of history, for Claudia, and for all our stolen children, lives that have joined the cosmos.”

In April, Bishop Mark J. Seitz of El Paso, Texas, who is one of the U.S. border bishops, gave to Pope Francis prayers cards of Jakelin and Felipe during a visit to the Vatican.

Jakelin died at the El Paso Children’s Hospital in December 2018 after she and her father were detained by border agents. An autopsy report said she died of a bacterial infection and some question whether earlier medical intervention would have saved the 7-year-old’s life. Felipe also was detained with his father in El Paso last December and died of the flu on Christmas Eve at a hospital in New Mexico.

In a May 23 interview with CBS News, Deputy Customs and Border Protection Commissioner Robert Perez said the surge of migrant families at the border has caused a “humanitarian crisis” and it is “overwhelming” government resources for detention and housing facilities. That has made it hard for federal officials to care for the vulnerable, but the agency has actively been shuttling sick migrants to proper medical facilities, he said.

“We’re still making nearly 70 trips a day to the hospital across the entirety of the border because of the medical conditions that we’re encountering,” Perez told CBS.

PREVIOUS: Path to Peace Foundation honors Aid to the Church in Need with 2019 award