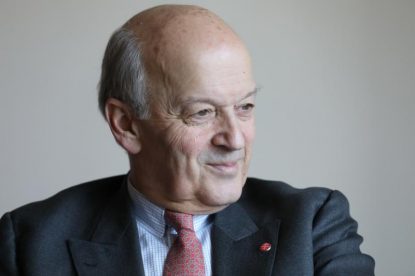 Thomas Heine-Geldern, the new executive president of Aid to the Church in Need International, smiles during an interview with Catholic News Service Nov. 28 in Washington. (CNS photo/Bob Roller)

NEW YORK (CNS) — Thomas Heine-Geldern was determined to spend one-third of his life in business, one-third in intellectual pursuits and one-third in charitable endeavors.

On May 22, the 67-year-old Austrian accepted the 2019 Path to Peace Foundation Award on behalf of the international papal charity he heads. The Germany-based organization provides pastoral support and humanitarian assistance to poor and persecuted Christians in 140 countries.

The Path to Peace Foundation supports the work of the Vatican Mission to the United Nations. Its president is Archbishop Bernardito Auza, Vatican ambassador to the U.N.

In accepting the foundation’s award in New York, Heine-Geldern recognized the Vatican mission “for its commitment to constantly remind the international community of its obligation to defend and safeguard the human rights of persecuted Christian and other minorities.”

Heine-Geldern spent much of his business career as an executive in the European paper industry. In 2013, he co-founded the Austrian Congress of Christian Managers and Entrepreneurs. The group organizes a biennial conference for business leaders. He said it is an opportunity for business leaders to witness to their Christianity.

“These are people who work to be successful business owners and entrepreneurs, but acknowledge that they get their strength from Mass, the Gospels, retreats” and other spiritual practices, he said in an interview with Catholic News Service.

The most recent conference drew 300 people and Heine-Geldern said one participant from a large company told him, “It is our obligation to try every day to reduce our distance to Jesus.”

He said many small- and middle-sized businesses in Germany and Austria operate on the principles of Catholic social teaching. “We balance the needs of the shareholders and the stakeholders … and prove by the way we handle our day-to-day business that we are not completely remote from the teachings of our Lord,” he said.

Heine-Geldern’s openness to witness his faith, and perhaps a small crucifix in his office, sparked questions from business associates from the former Eastern Bloc countries after the fall of the Berlin Wall.

He said one East European manager asked him: “Tell me something about God. I’ve never heard of him.” Another described practicing his faith in secret during the communist era. A third said lingering suspicion of Christians 10 years after the collapse of the Soviet Union compelled his father, a public servant, to bring the family to a different church each Sunday for Mass.

Heine-Geldern said people opened up to him out of mutual respect and a sense that that there was something to his approach to business beyond the profit and loss statement and balance sheet.

He said one of the most interesting interactions in his extensive travels with Aid to the Church in Need was meeting with leaders of the Orthodox Church in Russia.

“There is great potential for ecumenical cooperation between the very small Catholic Church in Russia and the very strong Orthodox Church,” he said. Aid to the Church in Need supports both Catholic and Orthodox efforts and recalls St. John Paul’s description of their relationship as “a church with two lungs.”

Although cooperative efforts are not always easy, Heine-Geldern said the charity’s Moscow office funds seminars about issues of common interest and employs a liaison to “enhance dialogue” between the two churches.

Some of the most impressive work Heine-Geldern saw in Russia was in Siberia, he said. It was humbling to “go into the middle of nowhere and find an orphanage run by two Polish women religious serving 20 young men from broken families. The sisters sustain a difficult job by the force of their faith,” he told CNS.

Heine-Geldern described Aid to the Church in Need’s efforts to reestablish ecclesial institutions in post-communist Europe “a spearhead. No church or seminary in Eastern Europe got started without the help of ACN,” he said.

While many of those churches no longer need direct assistance, Heine-Geldern said the agency is now heavily engaged in pastoral work with the Roma people in Romania, Hungary and Slovakia.

Heine-Geldern said the focus of Aid to the Church in Need is to help where the local church does not have the finances to fulfill its mission. It supports the education of clergy and religious, construction and repair of infrastructure, transportation for parish workers, Mass stipends for priests and living expenses for women religious. A separate publishing arm of the organization provides Bibles and catechetical materials.

One of the newest initiatives is the funding of safe environment curriculum in training programs for future priests, women religious and catechists. ACN raised $120 million in 2018 and funded more than 5,000 projects in 140 countries.

The agency also offers emergency aid through its network of church contacts. Violence in Iraq and Syria has displaced huge populations of Christians.

Since 2014, Aid to the Church in Need provided $40 million in emergency aid in Iraq and another $15 million for housing repair and reconstruction for people who chose to return to their homes on the Ninevah Plain. In Syria, it has spent $35 million for food, medicine, housing, education and pastoral projects.