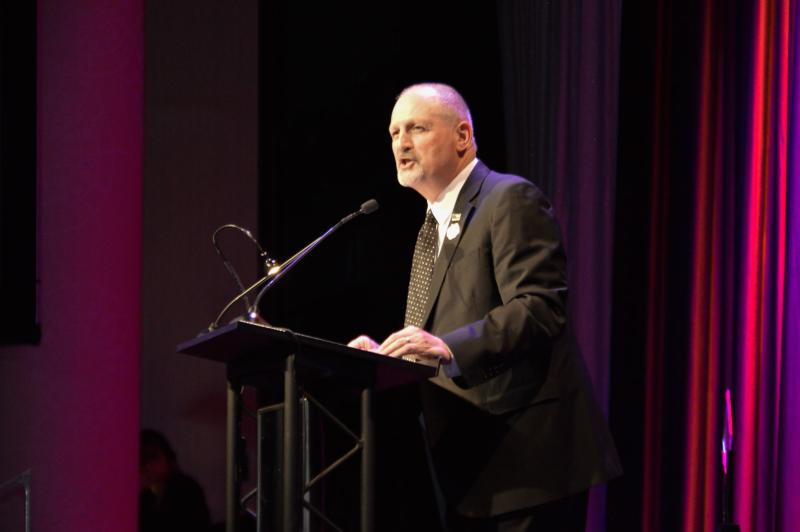 Frank Siller, CEO of Stephen Siller Tunnel to Towers Foundation, is seen in this undated photo. He will receive the Christopher Leadership Award in New York City May 23, 2019, for his support of injured veterans, first responders and Gold Star families. (CNS photo/courtesy David Reich)

NEW YORK (CNS) — Frank Siller, chairman and CEO of the Stephen Siller Tunnel to Towers Foundation, is the 2019 recipient of the Christopher Leadership Award.

He is being recognized by The Christophers “for the invaluable aid he brings to catastrophically injured veterans, first responders and Gold Star families” through the charity he co-founded with his five siblings in honor of their late brother Stephen, a New York City firefighter who was killed on 9/11.

The honor for Frank Siller, announced in early May, is being presented May 23 along with Christopher Awards for winning film productions, broadcast TV and cable programs, and books for adults and children. It is the 70th anniversary of the organization’s awards program.

The Christopher Leadership Award recognizes individuals “whose work, actions and example serve as a guiding light to others.”

On Sept. 11, 2001, firefighter Stephen Siller got the call that a plane had hit the North Tower of the World Trade Center. Stationed in Brooklyn, he drove the truck to the Battery Tunnel to get into Manhattan but found the tunnel shut down for security reasons.

So after strapping 60 pounds of gear on to his back, he ran through the tunnel to join rescue efforts at the World Trade Center. The husband and father of five was killed when the center’s twin towers collapsed.

His six siblings wanted not only to keep his memory alive, “but to do it in a way that would help others,” according to The Christophers.

A year after the terrorist attacks, they created the Stephen Siller Tunnel to Towers Foundation, which began as a New York City-based charity run that retraced Stephen’s steps on 9/11.

But with Frank Siller as chairman and CEO, the organization has grown into “a national force for good” for many groups in need. It builds specially adapted smart homes for catastrophically injured members of the military who have lost arms and legs; pays off mortgages for families of first responders who have been killed in the line of duty; and pays off mortgages for Gold Star families whose “loved ones made the ultimate sacrifice in service to their country.”

The foundation, which also supports a variety of community programs around the country, has raised over $125 million since it was started. Of every dollar raised, 95 cents goes to programs.

“My parents had seven kids,” Frank Siller told The Christophers. “We were very poor, but we were never too poor to do something good for our neighbors.”

He said his parents often quoted the words of St. Francis of Assisi: “While we have time, let us do good.” Frank and his siblings adopted those words as the foundation’s motto.

The Christophers noted that the Siller brothers and sisters were especially close to Stephen because he was only 10 when their parents died, “so they each had a hand in raising him.”

Frank Siller said the losses that he has experienced in his life allow him to relate to the people whom the Tunnel to Towers Foundation helps.

“I understand exactly each point they’re at because I lived it,” he said. “After 9/11, so many people were there for our family. It lifts you to know you’re not alone, and that people care and are praying for you.

“This is the message that we send to all these great families. … We don’t want to just pay off the mortgage or build them a mortgage-free home, a smart home. We want to be part of their lives,” he continued. “They join us on our mission and are our greatest ambassadors because they received it and they want to pay it forward to the next person.”

The more these recipients “do for somebody else, the better they’re going to feel,” he added. “And they do. It does lift you, it does heal you, and it does give you a great purpose that’s bigger than (yourself).”

Previous winners of the Christopher Leadership Award include Capt. Scotty Smiley, the U.S. Army’s first blind active-duty officer, and Patti Ann McDonald, widow of heroic Detective Steven McDonald of the New York Police Department. Her husband was shot July 12, 1986, while on duty, leaving him a quadriplegic. In the years before his death in 2017, he became an inspiration to many and may be best known for forgiving the teen who shot him.

The Christophers, founded in 1945 by Maryknoll Father James Keller, is rooted in the Judeo-Christian tradition of service to God and humanity, using the ancient Chinese proverb “It’s better to light one candle than to curse the darkness” to guide its publishing, radio and awards programs.