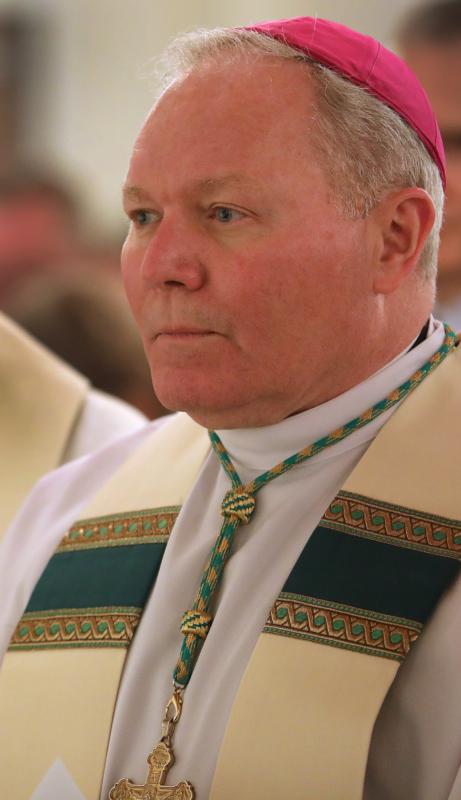 WASHINGTON (CNS) — Bishop Edward J. Burns of Dallas questioned an affidavit and a dramatic raid by local police who descended on church property in the Texas diocese wearing “ski masks and SWAT gear” in mid-May saying they were looking for documents related to abuse investigations.

The Diocese of Dallas has fully cooperated with police and has been transparent and communicative with law enforcement, which is why “we were surprised, dismayed and even disappointed by the action taken,” said the prelate in a May 17 video posted on the diocese’s website a couple of days after the raid.

On May 15, law enforcement searched three sites belonging to the diocese saying they were looking for documents related to an ongoing investigation of sex abuse cases, including one involving an accused priest who has left the country.

In a statement accompanying the video, the bishop said the raid was unnecessary and a phone call would have prevented it. Three sites were searched, including the pastoral center, a parish office and an offsite warehouse.

“This event was most traumatic for those who were present in the building at the time, as some of the approximate 40 law enforcement agents approached employees in ski masks and SWAT gear,” Bishop Burns said in the statement.

He said he was “saddened” that police carried out such a “highly publicized search … based on an affidavit that contained multiple factual errors.”

“Because a piece of information discovered in an entirely independent police investigation is not in the diocese’s files,” he said, the assertion is that “the diocese must have hidden or concealed that information and is continuing to hide or conceal that information, so that it warrants a raid of religious offices.”

But that’s not true, he said, and referred to an assertion made by Dallas police detective David Clark in the affidavit.

“The diocese reviewed 115,216 files, encompassing over 221,855 pages, that covered 70 years. Within this process, after files were being submitted to the police, the diocese discovered additional files, identified by Detective Clark as an ‘additional 51 pages’ in the affidavit. These 51 pages, out of the over 221,855 pages being reviewed, were immediately turned over to the police upon discovery. To imply that these documents were intentionally withheld in any capacity is to truly misrepresent the nature of our correspondence with the Dallas Police Department.”

He said the diocese has made public a list of every accusation it believes is credible and the affidavit implies otherwise.

“The implication that there are new clergy abusers is simply untrue,” he said. “Every person being investigated in this affidavit was reported by the diocese, appears on the published list and has been known by the Dallas police.”

Bishop Burns also defended the qualifications of those on the Diocesan Review Board, saying it has two local police chiefs, a clinical child psychologist who specializes in child abuse victims, a doctor and an attorney.

Given the news of the raid and the allegations made in the affidavit, he said, “I know many of you are hurting, perhaps even angry and confused regarding the latest news.”

“I recognize that some may question the church’s credibility and transparency in this matter, but any suggestion that the diocese was not cooperating in good faith is simply not true,” the bishop said. “For this reason, I have prepared a document that reviews a detailed outline of the many discrepancies and misstatements made in the affidavit and reported in the media when the affidavit was made public.”

The church has always been referred to as the “barque of St. Peter,” he said, and the image of the boat of Peter the fisherman has always been the symbol for the church.

“Disciples know that there will be storms and there will be waves that hit up against this church,” he said. “Currently, we are seeing the waves of the media and law enforcement on either side. It is my resolve as bishop of this diocese to continue in our charted course in this storm. We will continue to stay on this course by focusing on the necessary lights that guide us: transparency, accountability, healing and God’s grace. Continuing to do what is right, I am sure that we will weather this storm. I ask you to stay strong in the faith.”

Police have not publicly responded to the bishop’s statement, but in a news conference in mid-May, a police representative said: “We believe the execution of the warrants was wholly appropriate for the furtherance of the investigation.”

NEXT: Students plan to raise nuclear weapon dangers in fall return to campuses