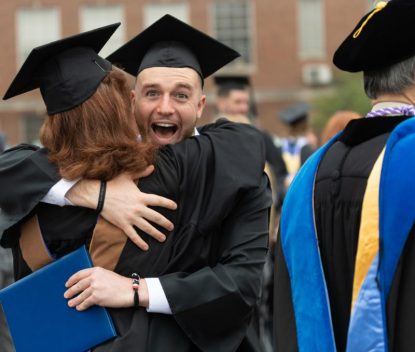 WASHINGTON (CNS) — College graduations often include an encouraging push by commencement speakers for graduates to go out and make a difference in the world. This year’s ceremonies at Catholic colleges and universities around the country were no different, but there may have been a little more urgency in the advice.

“I suspect that most commencement speeches this year are really going to come down to two words: ‘Save us,'” said business executive, author and motivational speaker Steve Pemberton at the May 19 commencement ceremony for Dominican-run Providence College in Providence, Rhode Island.

“There is a real fear in our nation that we find ourselves off course,” he told the graduates. “There is this feeling, that perhaps we will be unable to say that we have left the world better than we found it and in our uncertainty we turn our eyes to you,” the Providence Journal, daily newspaper, reported.

At the University of Notre Dame’s May 19 graduation, which was moved indoors due to inclement weather, speaker Peggy Noonan, author and columnist, primarily focused on the country’s troubled condition.

“I believe America needs help right now and America knows it. The reasons are so obvious that we’ve almost stopped saying them,” she said. “America is a torn-up, wounded place in need of repair.” Noonan said she is not “fussy about where the repair comes from and I don’t think the American people are either. They just want it to come soon.”

Noonan, who was a speechwriter for President Ronald Reagan, urged graduates at the university in South Bend, Indiana, to be farsighted and to recognize America’s plight while working together with people who might not share the same political views.

“Whatever holds us together now is good and necessary and must be encouraged — whatever it takes,” she said. “The secret of successful politics is to be moved more by what you love than what you hate.”

An article about the graduation on the university’s website said Noonan pointed out that this was the first year Notre Dame’s commencement speaker, valedictorian and salutatorian were all women. “It’s a delight to be with these strong, smart women who along with the strong, smart men make this university the great thing that it is,” she said.

At the May 11 graduation at Anna Maria College in Paxton, Massachusetts, student speaker Deborah Joseph urged fellow graduates to see their life as a battalion race, something she experienced in the U.S. Army before going back to school. She earned a bachelor’s degree in health and community services and plans to continue studying at the school for a master’s in business administration.

When you hit mile three of a three-mile battalion run you think you are where you want to be, she said. But the run continues. At mile four you have to find the energy to keep pushing. You have to motivate each other to get through the next miles to the keep the pace. By mile eight, she said, you are exhausted but have a feeling of accomplishment and know that you are part of a team.

“Today we celebrate the eighth mile in our run. But the run isn’t over yet. … And I don’t know about you, but I didn’t run that hard just to stay in place,” she concluded to applause.

In Milwaukee, the student speaker at Marquette University’s May 19 graduation was Jacob Zelinski, majoring in English and public relations. The graduate was the first recipient of the James Foley Scholarship, named in honor of the journalist and 1996 Marquette graduate who was killed in 2014 in Syria by Islamic state militants.

Zelinski said he was influenced by Foley’s legacy and more recently by the death of his 23-year-old brother in a car accident. He said the family tragedy made him value the Marquette community all the more.

In a heartfelt message to fellow graduates, and published on the university’s website, he told them: “You can have second chances and the moral courage required to help heal the broken world and vulnerable moments that reveal how strong you really are.”

“Because it’s true: You can’t have it all,” he said. “You can’t have life without loss, without tragedies and moments that bring you to your knees and heartbreak after sacred heartbreak.” But he also reminded them that they could have “this moment, this day, this privilege, this prayer — wholly — and you can have every drop of grace this world has to offer you.”

Graduates also were reminded of the financial costs of education, a cost that will still loom for many in student loans left to pay, and a cost that hindered some from pursuing the goal of higher education.

During the University of Notre Dame’s commencement, Norman Francis, the former president of Xavier University Louisiana received the Laetare Medal, a special honor for American Catholics. In his remarks, he said he was honored to receive the award and that he wished to speak for those who don’t have the chance to go to college.

He told the graduates that they bear a heavier burden than previous generations to heal the nation and lift people up to meet their potential.

“What are you going to do to fulfill what God intended for each one of you? You are going to have to be leaders. You can’t just sit around; you have to do something,” he said.

In a surprise announcement at one college graduation ceremony, the speaker said he would pay off the graduates’ student loans. This announcement, by billionaire Robert Smith May 19 at Atlanta’s Morehouse College, was mentioned in the commencement speech the next day at Boston College.

Isabel Capeloa Gil, president of the International Federation of Catholic Universities, told the graduates: “Unfortunately, I cannot offer to pay your student loans.” But she didn’t leave it at that. “I strongly encourage those who can to do so,” she added.

She also gave the graduates this free advice: that “engaging with those who challenge your right to hold the opinions you hold, your faith and beliefs, your values, is perhaps the most difficult path to follow.”

A report on the ceremony on Boston College’s website said she told the graduates that the call to be “ethical leaders in this stunningly diverse world takes courage” and requires listening to others and defending the rights of others to be heard — even if they disagree — and always speaking up against abuse.

Contributing to this report was Margaret Russell, editor of The Catholic Free Press, newspaper of the Diocese of Worcester, Massachusetts.

NEXT: Path to Peace Foundation honors Aid to the Church in Need with 2019 award