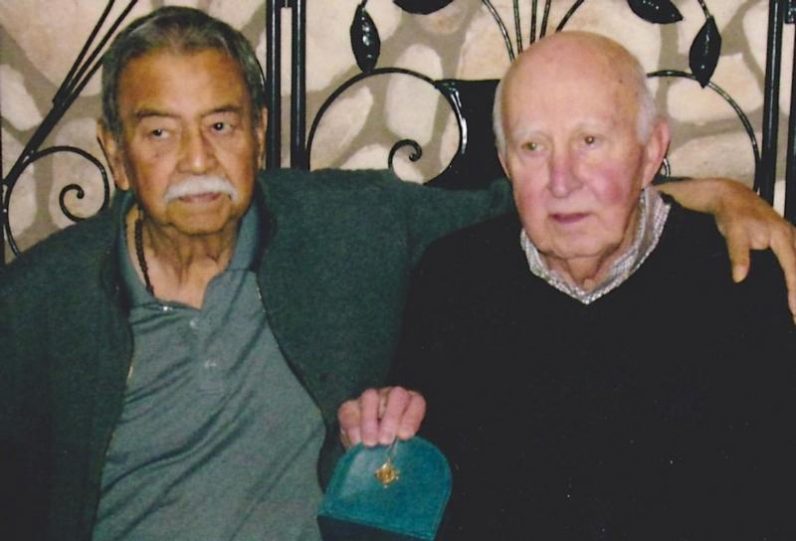 Robert Pacek, a retired doctor from Natrona Heights, Pa., who was an Army physician stationed in South Vietnam, holds an Our Lady of Guadalupe medal given to him in 1966 by Juan Zamarippa, left, an Army medic at the time. (CNS photo/courtesy Bob and Joyce Pacek)

PITTSBURGH (CNS) — The Virgin Mary and the Catholic faith have ways of connecting believers across space and time.

Pacek was an Army physician stationed in South Vietnam during the war from September 1965 to September 1966. With his time overseas at a close, Pacek was looking forward to getting home to Pennsylvania and joining his brother’s medical practice.

Sitting in a jeep just before leaving, Pacek was approached by Zamarippa, an Army medic who had something to give him.

“He said, ‘I want you to take this.’ It was a medal with a chain,” Pacek recalled in an interview with the Pittsburgh Catholic, the diocesan newspaper.

The medal of Our Lady of Guadalupe belonged to Zamarippa’s mother. She blessed him with it and gave it to him when he left for Vietnam. “I felt bad taking it,” Pacek said.

He put the medal and chain in his pocket and gave them to his wife, Joyce, when he got home. She wore it a few times through the years, but eventually put it away for safekeeping. And there it stayed until December 2018.

The Paceks, who have three adult children and nine grandchildren, are members of Our Lady of the Most Blessed Sacrament Parish in Natrona Heights.

Bob, who retired from medicine after 40 years in 2002, and Joyce were talking as the Dec. 12 feast day of Our Lady of Guadalupe approached. They recalled the medal and chain given to him more than 50 years ago and wondered where it was.

Rummaging through boxes and after a quick prayer to St. Anthony, Joyce found the medal and chain, which had broken. She told Bob that they should find Juan and give the medal back to him since it belonged to his mother.

“So I went on a computer and I found Zamarippas in Florida, New Mexico and Texas, and I thought, well, he was of Mexican origin, I thought, and he might settle in Texas,” Bob said.

There was a listing for Juan Zamarippa, so he called the phone number and got an answering machine. He said, “Juan, were you with the 142nd Medical Detachment in Vietnam? I’m Capt. Pacek, and I’d just like to talk to you.”

Sure enough, Juan called the next day. He was a career Army man and had a second tour of duty in Vietnam, for which he earned a Bronze Star and Silver Star for heroism. His wife had passed away, his health wasn’t so good and he was living with a daughter.

“We had a good talk. He remembered me after all those years,” Bob said.

“Which I think is amazing,” Joyce said. “He was in the service for 20 years, worked with a lot of physicians, and when he retired he worked in many hospitals in San Antonio. … For him to remember Bob after 50 years, that’s something.”

Bob and Joyce immediately made plans to visit Juan in San Antonio. After a few more phone calls, they flew in February to Texas, where they had lived briefly while Bob was in training at Fort Hood.

They toured five historic Catholic missions in San Antonio, and it seemed that everywhere they turned was an image of Our Lady of Guadalupe.

Bob and Joyce attended Sunday Mass in the city, which had seen incredible growth in a half-century. In his homily, the priest began by saying, “You know, sometimes you meet someone that you haven’t seen for a long, long time, and they remember you.”

“We got goose bumps because that was exactly what was happening,” Joyce said.

They met Juan and his family for lunch at one of his favorite restaurants, Henry’s Puffy Tacos.

“They were lovely, lovely people,” she said. “I brought them gifts and they were just delightful.”

Before departing, Bob presented the medal, with a new chain and inside a small jewelry box, to Juan.

“He didn’t want to take it,” Bob said. “He said, ‘You should keep it.’ I said, ‘No, well, it belongs to your family. You have two daughters. One of them could wear it. It should belong to the family.’ So then he finally did take it.”

The Paceks discovered that Juan’s birthday is Dec. 12, the feast of Our Lady of Guadalupe. That’s probably “why his mother named him Juan, for Juan Diego,” Joyce said.

Wanda Salinas, one of Juan’s daughters who attended the lunch, said her father was moved to see Bob and the medal after so many years.

“Dad isn’t in the best of health, but my dad has always been very sentimental,” she told the Pittsburgh Catholic. “The visit was very touching for him and very emotional. And when he saw the medallion, he couldn’t believe that he (Bob) had kept it this long.”

Salinas later asked her father why he gave the medal to Bob when it had belonged to his mother. Juan said, “I saw that he was a good man. I wanted to make sure that he was taken care of, like I’d been taken care of.”

“I think the most important thing about the reunion was the faith that they shared,” Salinas said. “That’s what I got from all of this, that that was the one thing they shared, and it carried with them for more than 50 years.”

Bob and Joyce, who have traveled extensively, especially since retirement — to China, the Holy Land, Japan, Egypt, Slovakia, Italy, France, Germany, Ireland, Portugal and even to Qui Nhon, the town in Vietnam where Bob was stationed — feel blessed to have made the journey back in time to see Juan again.

“I believe in providence. This happened for a reason,” Joyce said.

“I just again feel that it was something we had to do. I’m glad we did it. It made them happy. It was something that wasn’t expected, and I just feel good that that medal is where it’s supposed to be.”