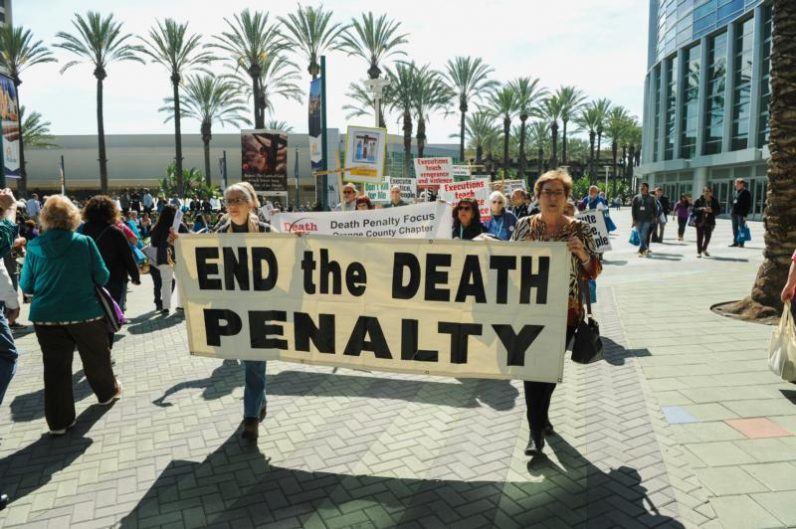 Demonstrators march through a courtyard to protest the death penalty during a rally organized by “Catholics Against the Death Penalty-Southern California” in Anaheim Feb. 25, 2017. On May 30, 2019, New Hampshire became the 21st state to ban capital after lawmakers garnered enough votes to override Gov. Chris Sununu’s veto of a bill to repeal the death penalty in the state. (CNS photo/Andrew Cullen, Reuters)

WASHINGTON (CNS) — On May 30, New Hampshire lawmakers garnered enough votes to abolish the death penalty in the state, overriding a veto from Gov. Chris Sununu and becoming the 21st state to ban capital punishment.

Bishop Peter A. Libasci of Manchester thanked lawmakers shortly after the vote in a statement issued on the New Hampshire diocese’s website.

“As good citizens, we must not look upon this vote as a victory, for that would dishonor the grief of those whose lives have been tragically altered by the crimes committed against their loved ones and society in general,” he said.

“Instead, we need to stand together as a citizenry and live by what we said when we spoke of human dignity, incarceration that rehabilitates, especially in cases of life without possibility of parole,” Bishop Libasci said. “Being part of a society that is committed to dealing with the ills that lead to the decomposition of personhood and the evil crime of murder is the work of a noble people who uphold the sacredness of human life.”

Though the New Hampshire Legislature had passed the bill repealing capital punishment in mid-April, the governor in early May vetoed the bill, but legislators in the state garnered enough votes to override the veto.

“Today’s repeal is a major step toward building a culture that unconditionally protects the dignity of life and is yet more evidence that the death penalty is falling out of favor with the American public,” said Krisanne Vaillancourt Murphy, executive director of Catholic Mobilizing Network, a Washington-based organization that works to end the use of the death penalty.

“Along with death penalty abolition comes the opportunity to create more restorative responses to incidents of harm,” she said in a May 30 statement following the announcement of the repeal. “Today, we especially hold in prayer all murder victims and their family members and ask for their continued healing.”

The organization referred to efforts by Catholics in New Hampshire to support the measure that abolished the death penalty.

“In New Hampshire, Catholics played key roles to advance H.B. 455,” the organization’s statement said in referring to the bill. It also noted Bishop Libasci’s “written testimony in support of the bill, where he labeled capital punishment ‘a faulty response’ to crime and urged legislators to ‘repeal the death penalty and devote more resources to providing services to (families of murder victims) so we may offer a true path of support and healing.'”

Though the governor who vetoed the bill is a Republican, a group called Conservatives Concerned About the Death Penalty, pointed out the bipartisan effort in overriding the veto and spoke of support among conservatives to abolish capital punishment.

“Ending New Hampshire’s death penalty would not have been possible without significant Republican support. Increasing numbers of GOP state lawmakers believe capital punishment does not align with their conservative values of limited government, fiscal responsibility, and valuing life. The state of New Hampshire will be much better off because of it,” Hannah Cox, the group’s national manager, said in a statement.

Without a single vote to spare, four Republicans voted with 12 Democrats to override the veto 16-8.