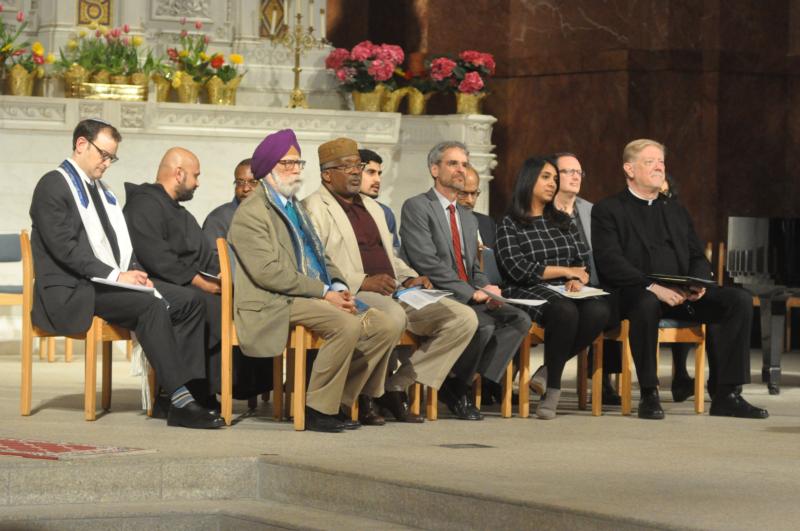 Leaders from a variety of faith communities sit in the sanctuary of SS. Peter and Paul Cathedral in Indianapolis for an April 25, 2019, ÒSolidarity Vigil and Interfaith PrayerÓ in response to the Easter Sunday bombings in Sri Lanka. (CNS photo/Sean Gallagher, The Criterion)

INDIANAPOLIS — The Easter Sunday bombings in Sri Lanka that killed more than 250 people and damaged three hotels and three churches, two of which were Catholic, sent shock waves among believers of many faith traditions around the world on the holiest day on the Christian calendar.

Among them was Aliya Amin, executive director of the Indianapolis based Muslim Alliance of Indiana. When 50 Muslims were killed March 19 during shootings at two mosques in Christchurch, New Zealand, she found solace from local interfaith gatherings in response to those attacks.

The day after the April 21 bombings in Sri Lanka, which also injured more than 500 people, she began organizing a gathering similar to the March interfaith events.

The “Solidarity Vigil and Interfaith Prayer” event, co-sponsored by the Archdiocese of Indianapolis, the Indianapolis-based Center for Interfaith Cooperation and the Muslim Alliance of Indiana, drew leaders in the city of the Christian, Hindu, Jain, Jewish and Muslim communities. It took place April 25 at SS. Peter and Paul Cathedral in Indianapolis.

After the vigil service, Amin said she appreciated “hearing the speakers from different backgrounds and faiths having the same underlying message emphasizes that common thread of humanity that we all have.”

“Knowing that we have that common thread helps us heal,” she told The Criterion, archdiocesan newspaper of Indianapolis.

Father Rick Ginther, director of the archdiocesan Office of Ecumenism and Interreligious Affairs, read a letter from Indianapolis Archbishop Charles C. Thompson at the start of the vigil service.

“With persons of all faith traditions, we reaffirm our conviction for the sacredness of life and dignity of every person,” said Archbishop Thompson. “While we grieve the loss of all those lives that have been wounded or destroyed by violence and injustice, we rejoice in the Easter proclamation of salvation that has been won for us in the risen Lord, Jesus Christ.”

Father Ginther expressed his appreciation for the support shown to local Catholics by members of other faith communities in the wake of the bombings that killed so many Catholics in Sri Lanka.

“The outpouring of solidarity in respect for places of worship and worshippers in those places was more poignant given the circumstances,” he said. “I feel much more connected now to the pain, anxiety and need for vigilance so many others have felt for centuries.”

The vigil service also drew two Sri Lankans who live in central and southern Indiana — a Muslim and a Benedictine priest.

Ravi Nalim, a Sri Lankan Muslim, teaches engineering at Indiana University — Purdue University Indianapolis. “Devastated” by the attacks, which were carried out by members of a Sri Lankan militant group with ties to the Islamic State, Nalim was filled with emotion as he spoke at the service.
“I would not be where I am today without the love of learning and serving that my parents imparted to me,” said Nalim. “And they in turn learned that love from the Catholic nuns and priests at whose feet they were educated.

He later reflected on a passage from the Quran, the sacred book of Islam, about the future day of resurrection and judgment.

Listening to Nalim’s reflection was Benedictine Father Peduru Fonseka, a native of Sri Lanka and a member of Saint Meinrad Archabbey in St. Meinrad, who drove some three hours to attend the vigil service.

“A part of me needed this moment for my own healing,” the priest said.

Learning about the attacks in his home country had made celebrating Easter Sunday Mass at Resurrection Parish in Evansville a challenge.

“To get up there to the altar and look back at the community, to see all the little children and young families dressed up to celebrate Easter, and then to think of home and what happened was very hard,” Father Fonseka said.

The two men found the attacks particularly difficult in part because both were raised in Sri Lanka to respect people of other faiths.

“Whenever we celebrated a holiday, we always shared with our neighbors,” Nalim said. “Almost everywhere we lived, most of our neighbors were not Muslim. But we still felt at home. We felt closely connected with our Buddhist, Christian and Hindu neighbors and all others.”

He said he raised his own children in the U.S. in the same way by having his family participate in interfaith events.

“My family has gained so much from really recapturing the very multi-faith environment in which I grew up in Sri Lanka,” Nalim said. “To experience that again in Indianapolis with different faith communities, that has tremendous value for us.”

“There’s a unity in the diversity of our religions,” added Father Fonseka. “If there’s one thing that’s going on, it’s love and peace.”