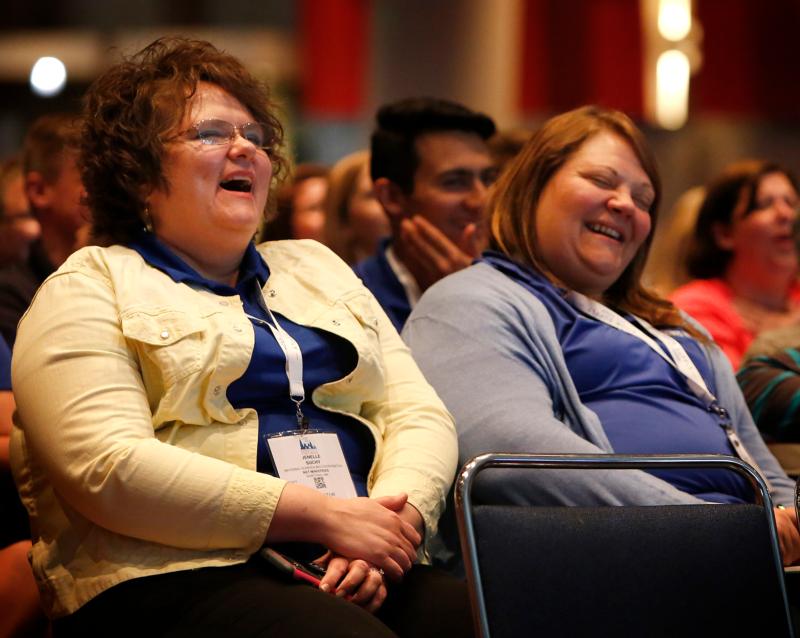 Jenelle Suchy, National Scheduling Coordinator for Net Ministries, laughs during the homily at the closing Mass at the NCEA 2019 Convention & Expo in Chicago April 25, 2019. Over 9,000 Catholic educators from across the country gathered in Chicago for the annual event. (CNS photo/Karen Callaway, Chicago Catholic)

CHICAGO (CNS) — Rocio Carballo came all the way from Belize to attend the National Catholic Education Conference April 23-25 at McCormick Place Convention Center in downtown Chicago. It was her seventh year attending the convention.

“In my first year, I thought it would be aimed only to teachers, but it’s more than that. I’ve appreciated the focus on leadership skills and financial oversight for people like me,” said Carballo, who is president of Sacred Heart College, a high school and junior high school with 1,550 students and 135 staff.

More than 9,000 educators and leaders from dioceses around the country and beyond attended this year’s conference, along with 700 vendors. They took part in hundreds of sessions on topics focused on religion, technology, leadership, curriculum development, trauma, finances and prayer. There are 1.8 million students enrolled in Catholic schools across the country, according to the National Catholic Education Association.

Carballo said she is taking home information about both marketing Catholic schools and effectively using digital media in the classroom.

“I attended sessions that showed us how to retain our students and, most importantly, how to market our Catholic institutions and continue to uphold the institutional excellence,” she said.

Jeanine Ranzen, a teacher at Our Lady Queen of Peace School in Madison, Wisconsin, said this year’s convention was one of the best she attended.

“It’s been very uplifting being here and being surrounded by 9,000 people who are on the same mission,” she said.

Ranzen, who grew up in St. Barnabas Parish in Chicago, was also encouraged by seeing so many young teachers in attendance.

“The young teachers have a lot of passion for what they are doing. We want to have good teachers to continue the mission,” she said.

Next year’s conference will take place in Baltimore April 14-16.

Duriga is editor of Chicago Catholic, archdiocesan newspaper of Chicago.