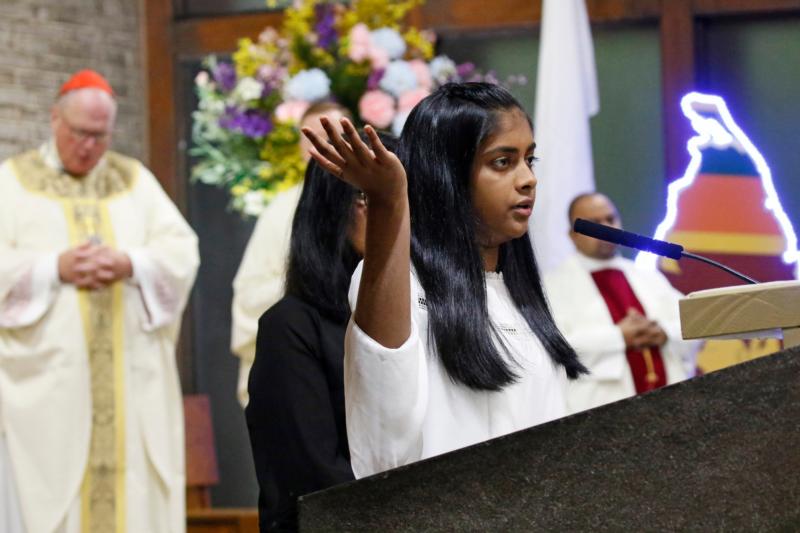 Vihara DeSilva reads one of the general intercessions during Mass May 12, 2019, at St. Adalbert Church in the Staten Island borough of New York. Cardinal Timothy M. Dolan of New York celebrated the liturgy for the repose of the souls of the more than 250 people killed in the Easter suicide bombings in Sri Lanka. The cardinal also led prayers to end the persecution of Christians throughout the world. (CNS photo/Gregory A. Shemitz)

“I offer our beloved Sri Lankan community my sympathy, and assurance of my prayers. … This has been a terrible time for you after the terrible bombings,” the cardinal said. “We love you all very much, and we cherish you here in the Archdiocese of New York. We’re happy that you’re with us. But I know part of your heart is still back home in Sri Lanka.”

The cardinal was the principal celebrant of the May 12 Mass at St. Adalbert Church in Staten Island. The 420 people attending included two families who lost loved ones in April’s church and hotel bombings in Sri Lanka.

“It was my sister-in-law’s daughter and three babies, and my sister-in-law’s son and two babies,” said Mary Ciciley Peries, a parishioner of St. Adalbert-St. Roch, in a brief interview after Mass during which she became too emotional to continue.

The youths, affectionately called “babies” by Peries, ranged from ages 6 to 18. The seven victims died while attending Mass at St. Sebastian’s Church in Negombo. They were among the more than 100 who died there. Multiple arrests have been made in the bombings.

The borough of Staten Island is home to a large Sri Lankan community.

“This is a time for Jesus,” a grateful Peries said of the solidarity Mass in memory of her lost loved ones and all killed in the bombings. at St. Sebastian’s Church in Negombo.

“They are dead for Jesus — for the religion. I trust they are in heaven now. We are very sad. We cannot forget them. We can never forget this sad time,” she told Catholic New York, the archdiocesan newspaper.

In an earlier interview with Catholic News Service, she said that all of her family members had attended St. Sebastian’s for generations. “We’re baptized in that church, married in that church, everybody. It’s an old church. Everything is gone. So very sad.” She also told CNS that all of her friends and neighbors knew someone who had either died or been injured in the blasts.

At St. Adalbert, Peries and her family members sat together with the other family in the front pews. The cardinal acknowledged them in his homily, and he spoke with them after Mass.

The liturgy was offered mostly in English and partly in Sinhala, a main language in Sri Lanka.

“Sri Lanka has been on the Hill of Calvary,” Cardinal Dolan said in his opening remarks, assuring the continued prayerful support of the archdiocesan community.

“When you see that devastation and suffering, which I understand has affected many of you personally, with your families and neighbors back home, that hurts us,” the cardinal said in his homily.

“So please, hear me say as your pastor, that you have our love, our support, our sympathy and our prayer. … This Mass in solidarity with you and the suffering people, the frightened people back home in Sri Lanka, is a specially blessed day.”

Cardinal Dolan went on to speak about the significance of May 12, which was Good Shepherd Sunday and also Mother’s Day, noting the care displayed by mothers and shepherds, and the love both express through their protective actions.

The cardinal decried the rise in persecution of Christians and people of other religious faiths worldwide.

“We’re all in this together. … St. Paul teaches that the church is the body of Christ, and when one member of the body suffers, we all suffer,” the cardinal said.

“So when Sri Lanka suffers, we all suffer. … Jesus is the Good Shepherd. And we often call the church ‘Holy Mother Church,’ and within the Mother Church is our Blessed Mother, the mother of Jesus.

Oblate Father Nalaka Silva, a parochial vicar at St. James Parish in Woodbridge, New Jersey, who serves as a coordinator of the Sri Lankan Catholic community in New York and New Jersey, gave the closing remarks at the Mass.

Church lights were darkened and congregation members held lit candles while soft hymns were sung in the Sinhala language with organ accompaniment. Father Silva then led all in praying the Our Father and Hail Mary for the Sri Lankan bombing victims.

Father Silva thanked Cardinal Dolan for offering the Mass, and he thanked all clergy and parishioners for their participation. “The Easter Sunday terrorist attacks targeted the most innocent people, including children,” he said.

At the Mass, “we feel the true love that binds us as one,” said Father Silva, who celebrates the monthly Sri Lankan Mass at St. Adalbert Church.

Roy Appuhamy, a parishioner of St. Adalbert, sat near the front of the church. He told Catholic New York that his mother-in-law died in the bombings and said the Mass offered in memory of her and all the victims brought him great consolation.

“I am very grateful,” he said. “This is very special for us.”

Machado is on the staff of Catholic New York, newspaper of the Archdiocese of New York. Contributing to this story was Kurt Jensen in Washington.