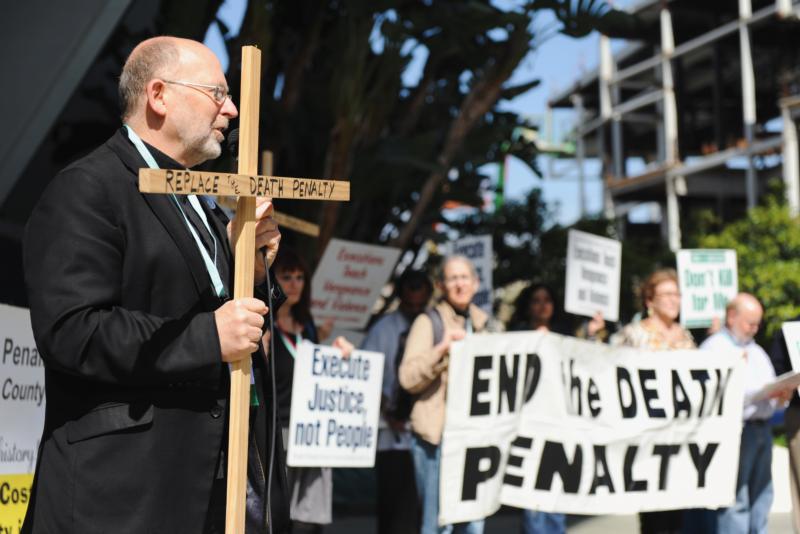 Father Chris Ponnet, chaplain at St. Camillus Center in Los Angeles, speaks during a rally protesting the death penalty in Anaheim Feb. 25, 2017. In new opinions issued by the Supreme Court May 13, 2019, the justices revealed their divided opinions on the death penalty. (CNS photo/Andrew Cullen, Reuters)

WASHINGTON (CNS) — Although the Supreme Court justices chose not to take up two petitions for review submitted by death-row inmates from Alabama and Tennessee May 13, they didn’t do so with a simple one-sentence rejection.

Instead, they made their reasonings and their divided views on capital punishment clear with new opinions that “set the record straight” — in the words of one of the opinions — offering reasons behind their recent death penalty decisions.

The flurry of opinions issued May 13 — more than 30 pages in all — reviews the high court’s responses to recent death penalty cases that appear contradictory.

In March, the court blocked the execution of Texas death-row inmate Patrick Murphy because his Buddhist religious adviser wasn’t permitted to be present but in February, the court allowed the execution of Domineque Ray, an Alabama Muslim, to proceed even though Ray had appealed the state’s decision to deny an imam’s presence at his execution.

On May 13, the court denied a review of an appeal from Christopher Lee Price in Alabama, a death-row inmate who had been denied a last-minute stay of execution in April over his challenge to the state’s lethal injection procedure.

In the 5-4 vote on his case, the court said the inmate had waited too long to ask for a different form of execution. After the ruling, Justice Stephen Breyer wrote a strongly worded dissent urging the justices to hold off on a decision and discuss it in a private conference.

“To proceed in this way calls into question the basic principles of fairness that should underlie our criminal justice system,” Breyer wrote.

Justice Clarence Thomas responded in writing to Breyer’s criticism May 13 as a means to “set the record straight.” In a 14-page opinion, he said Breyer’s claims contained “nothing of substance” and his legal analysis did not “withstand even minimal legal scrutiny.” He added that Price’s strategy of seeking another form of execution was simply to delay what was inevitable.

“It is the same strategy adopted by many death-row inmates with an impending execution: bring last-minute claims that will delay the execution, no matter how groundless,” Thomas wrote, adding that the proper response of the court should be to “deny meritless requests expeditiously.”

The justices’ decision in the case came after Price was to have been executed. He is now scheduled to be put to death May 30. The state set this new execution date because the death warrant for Price had expired before the state could execute him April 11.

On May 13, the court also denied review of the case of Abu-Ali Abdur’Rahman, a Tennessee death-row prisoner scheduled to be executed May 16. Abdur’Rahman and other Tennessee prisoners had challenged the state’s lethal injection protocol and state secrecy laws which prevents people from knowing how its lethal injection drugs are obtained.

Justice Sonia Sotomayor dissented from the court’s denial of a review of this case and said it was “perverse” to require inmates to provide an alternative execution method before they could successfully challenge an existing method.

Kavanaugh said Ray, the Alabama Muslim who was executed in February, had not claimed unequal religious treatment under the First Amendment and his demand for an imam’s presence came too late.

He said Murphy, whose execution was stayed, raised an equal-treatment claim and made his request for a Buddhist adviser’s presence a month before his scheduled execution. At the time, Texas policy only allowed Christian or Muslim ministers to be present, but the state has since changed its policy, banning all religious ministers from the execution room but allowing inmates to choose spiritual advisers to be in the viewing room.

One thing Justice Samuel Alito, joined by Justices Thomas and Neil Gorsuch, agreed on was that both cases reflect the problem of “inexcusably late stay applications” arriving at the court.

In a separate filing, Alito, who opposed both stays of execution, stressed that the court is presented with “claims that raised complicated issues that cannot be adequately decided with hasty briefing and an inadequate record.”

NEXT: Local Knights of Columbus to help with slain Colorado teen ‘hero’ funeral