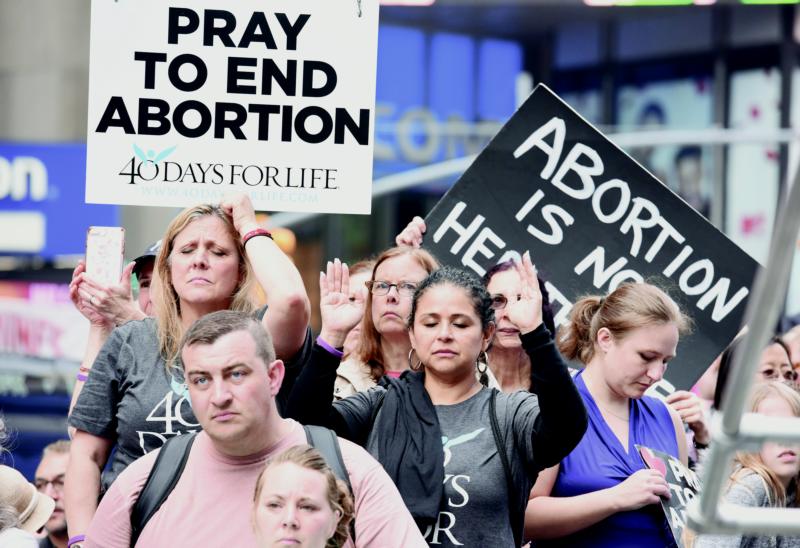 A woman prays as she and others attend the “Alive From New York,” which drew thousands of pro-life supporters to Times Square May 4 to cap New York Life Week, which began on Divine Mercy Sunday, April 28. (CNS photo/Mary DiBiase Blaich for Catholic New York)

NEW YORK (CNS) — Thousands of people gathered in Times Square May 4 to celebrate the dignity of human life with song, prayer, inspirational stories and a live ultrasound screening of a baby in the third trimester of development.

Jim Daly, president of Focus on the Family, said the “Alive from New York” rally organized by his group, a Colorado-based Christian evangelical organization, was the “largest pro-life event in New York history.” Organizers said 10,000 participants registered for the experience.

Daly and Jeanne Mancini, president of March for Life, were emcees for the event. Mancini said New York’s Reproductive Health Act “is out of step with mainstream America. In the last 10 years, eight out of 10 Americans would limit abortion in some way.”

New York Cardinal Timothy M. Dolan welcomed the participants in a video message where he said New York is “seeing an unprecedented attack on the unborn.”

“Through your efforts, many hearts have been converted. We’re live from New York, and it’s good to be alive!” the cardinal said to applause.

The program included appearances by pro-life activists, celebrities and survivors of abortion. Musicians Francesca Battistelli, Phil Stacey and Phil King performed throughout the event. Protesters tried unsuccessfully to drown out the proceedings.

Rev. Alveda King, niece of Rev. Martin Luther King Jr., said pro-life action is an extension of the civil rights movement. She punctuated her remarks with song and recalled her uncle’s words, “Injustice anywhere is a threat to justice everywhere.” She described her personal experience with live birth, abortion and miscarriage. “A woman has a right to do what she wants with her body, but the baby’s not her body,” she said.

Christina Bennett of the Family Institute of Connecticut said: “In New York, there are more black children aborted than born each year. Abortion is the number one cause of death in the black community.”

Retired National Football League player Benjamin Watson, father of newborn twins and five other children, addressed men who think they might not have a voice in the abortion debate. “It’s time to step up and step into this conversation with boldness, grace and conviction. We must expose the lies that are being told. We were made to be protectors and providers,” he said.

Melissa Ohden, who survived a failed saline abortion in 1977, said: “We’re not imaginary! We exist! We put the alive in ‘Alive from New York’!”

The event’s culmination was a live ultrasound performed on Abby Johnson, the former Planned Parenthood manager whose story was told in the movie “Unplanned.” While Johnson was in a medical trailer behind the stage, a narrated ultrasound examination pointed out well-developed features on the child’s face.

Johnson then appeared on stage with Ashley Bratcher, the actress who portrays her in the movie. “Those who speak out against life are people who are hurting. We pray for them to find truth because we want them to know peace,” she said.

“We will see a day where abortion in this country is unthinkable,” she added.

Earlier in the day, worshipers gathered for a noon Mass at St. Patrick’s Cathedral. New York Auxiliary Bishop Peter J. Byrne, the principal celebrant and homilist, told the congregation: “Life belongs only to God, and whoever attacks life attacks God.”

He said the state’s Reproductive Health Act attacks the most defenseless, the child in the womb, and stressed that the “Alive from New York” event was an opportunity to be tell truth to those in power.

The event marked the end of New York Life Week, an initiative sponsored by the archdiocesan Respect Life Office. It was intended as an opportunity for parishioners to “See Life Clearly,” uphold life in New York and promote the dignity of every human life. Parishioners were urged to contact their state legislators to express opposition to physician-assisted suicide.

PREVIOUS: In Washington, refugees from around U.S. lobby for federal program

NEXT: Four bishops sign on to letter voicing concerns with Equality Act