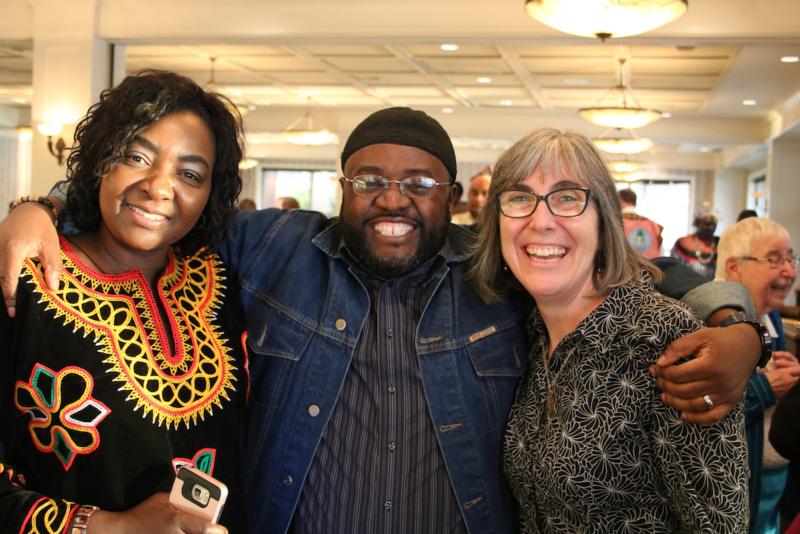 The Franciscan Sisters of Perpetual Adoration’s call to address the political and humanitarian crisis in Cameroon drew about 100 people to a town hall meeting and more than 1,000 viewers online.

The April 25 event in La Crosse, Wisconsin, specifically addressed the crisis in Kumba, a sister city to La Crosse, but all of Cameroon is suffering, officials said.

“When you’ve walked together for 20 years and you hear someone you love cry in pain, you can’t help but respond,” Sister Eileen McKenzie, president of the Franciscan Sisters of Perpetual Adoration, told the crowd.

La Crosse Friends of Cameroon is the civic group that maintains the sister-city relationship with Kumba. Its chairman, Lee Rasch, told the town hall that the sisters’ and sister-city relationship with Kumba has grown to include projects with other civic groups such as the Rotary Club and led to efforts to improve access to dental care and education and create mobile libraries.

“Friends don’t walk away from friends in a time of need,” Rasch said.

The need is great: Hundreds of people have been killed and hundreds of thousands have been displaced in Cameroon since 2016, when tensions rose between the French-speaking majority and the English-speaking minority.

Homes and businesses have been burned, Rasch said, and food production is projected to be 20 percent of what it was before the crisis, leading to fears of famine.

Rep. Ron Kind, D-Wisconsin, said the conditions in Cameroon are dire. Kind co-sponsored a resolution in the U.S. House of Representatives condemning the violence, but the legislative term ended before it could be heard. He said it will be reintroduced this session.

“What you heard today are classic gradations of genocide,” Kind said. “It’s a call to action for all humanity.”

Kind said while Cameroon “may seem like a million miles away” from Wisconsin, what happens there affects everyone.

“When there’s human rights abuses, when there’s suffering and oppression, there’s death and mass rape, there’s ethnic cleansing, when there’s cultural and heritage attacks, it diminishes our entire humanity,” Kind said. “As long as I have a voice in the United States Congress, I’m going to use it.”

The U.S. has been slow to condemn the violence, Kind said, because Cameroon is an ally against the terror group Boko Haram, but sanctions have been announced in the form of a $17 million reduction in military aid to Cameroonian security forces.

“We will not ignore the situation,” Kind said.

Officials urged town hall participants and viewers to contact their representatives to urge action to end the violence. The gathering ended with traditional Cameroonian music and dance.

NEXT: Bishops hear pain and hope at racism listening session in Baltimore