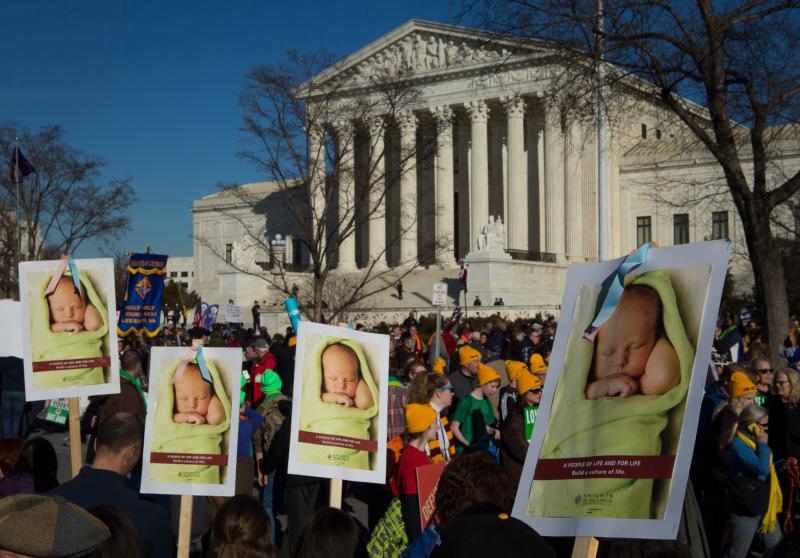 WASHINGTON (CNS) — What would American society look like if the Supreme Court’s Roe v. Wade ruling, which legalized abortion on demand, were overturned?

Panelists at a May 1 symposium sponsored by Americans United for Life stopped short of predicting when that would happen to the 1973 ruling, even with two new conservative justices, Neil Gorsuch and Brett Kavanaugh, on the Supreme Court.

But all agreed that the language of the decision — based on the medical knowledge about fetal development in the early 1970s and lacking a strong constitutional foundation while asserting a constitutional right to terminate a pregnancy — has rendered it obsolete.

“The Supreme Court needs to wake up,” said Catherine Foster, president of Americans United for Life. “Roe is long past its expiration date and the American public knows it.”

Americans United for Life, formed in 1971, has adopted an approach chipping away at the ruling. Last year, Clarke Forsythe, senior counsel of the organization, published a draft opinion for overruling Roe.

Charmaine Yoest, vice president of the Institute for Family, Community, and Opportunity at the Heritage Foundation, said the symposium’s goal in part was to rebut the idea of “reliance interest,” meaning, “American women have to come to believe that they need to rely on abortion in order to ensure their place in society.”

“What a wonderful thing that will be for our entire world,” Rep. Vicky Hartzler, R -Missouri, said of the end of Roe. She said it would be “a time of more opportunity for us to partner with women and offer them help — practical help” such as “life-affirming” pregnancy care centers.

“Think of the potential of 1.3 million children every year getting the chance to live,” she added. “They could be the scientist who finds the cure for Alzheimer’s (or) soldiers, first responders, businessmen, doctors — you fill in the blanks.”

Teresa Collett, a law professor at the University of St. Thomas, took issue with the often-espoused argument that women need legal abortion in order to not limit their work opportunities and find personal fulfillment, saying that workplace pregnancy discrimination was the more pressing issue.

“Companies don’t like women who raise families,” she said. The ideal situation is not the situation that the American economy can currently afford.”

“That’s not my definition of equality. I shouldn’t have to have the reproductive life of a man in order to succeed,” she added.

Helen Alvare, a George Mason University law professor who has spoken and written widely on the issue, said the old arguments used to advocate for abortion are “really lame” and need to be disputed.

Alvare disputed claims that “abortion is responsible for everything good that’s happened in the last 46 years” such as increasing women’s labor market participation, economic status and education.

She said the issues are more complicated and involve changes in social norms about women’s participation in education and in labor along with a rise in the availability of service jobs traditionally performed by women.

Intact family structures and education play a role in decreased abortions, Alvare argued. “Women with fewer abortions reap greater gains. The factors that make them better off are also factors resulting in their having few abortions.”

NEXT: Wisconsin Franciscans raise awareness of longtime crisis in Cameroon