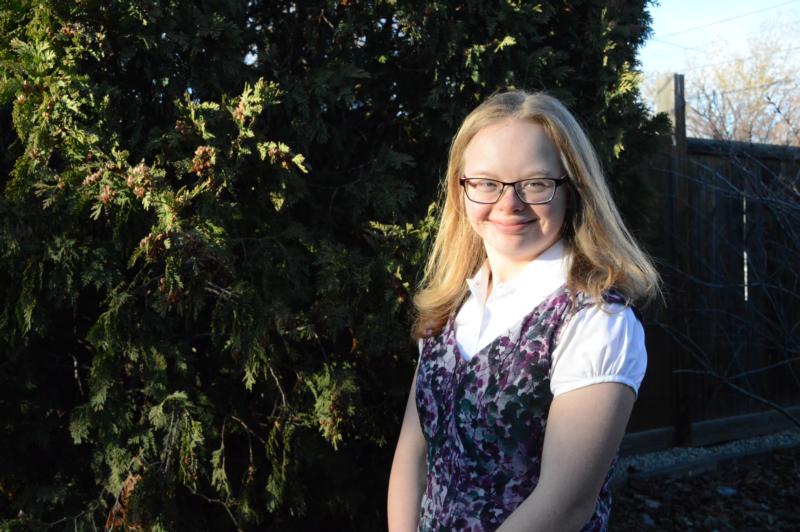 Sarah Joy Walker, a17-year-old from pictured in an April 24, 2019, photo, will be the guest speaker at this year’s Alberta March for Life on May 9. (CNS photo/Kyle Greenham, Grandin Media)

She told her story to a large audience at the Alberta March for Life May 9. The annual event coincided with the national March for Life in Ottawa, Ontario, and others across Canada.

Alisa Ketchum Walker, Sarah Joy’s mother, was five months pregnant when she discovered that the baby she was carrying had Down syndrome.

Instead of heeding the nurse’s suggestion, Alisa and her husband Joseph, an Anglican pastor, turned to their Christian faith, which values life from womb to tomb.

“That question never entered our minds. We were welcoming this baby no matter what,” Alisa said.

“Yes, it’s difficult news to digest because of all the unknowns, all the questions, all the little fears that rise up as to how we will raise a child living with different difficulties. But step by step, as you accept and allow what God has given you, he gives himself in turn. And it’s amazing what can happen,” she said.

Sarah Joy was welcomed into the Walker family with her two brothers and older sister.

When Sarah Joy first heard the story, it had a major impact. Ever since, she has been unable to forget that abortion could have ended her life simply because she had Down syndrome.

Sarah Joy’s address to the March for Life was her first public speech. She discussed a passionate and personal message on the sacredness of all human life and her fight against the abortion of babies with Down syndrome.

“Having this crazy, out-of-the-blue chance to speak at the March for Life, it’s pretty amazing,” Sarah Joy said. “This will be the first time I’ve gone outside of my personal bubble to help other people. I want to get this done so that I’m able to spread God’s word. I want to see that every baby lives and can be themselves no matter what.”

Since 1988, Canada has had no law prohibiting abortion at any stage of pregnancy. Access to abortion varies by province. In Canada, 94,030 abortions were reported in 2017, according to the Canadian Institute for Health Information.

Alisa Walker’s advice to expectant mothers is that while an abortion may seem like the best short-term option, the loss of a child can cause even greater long-term pain. She recommended that mothers seek advice and talk to people they trust before getting an abortion, and know that adoption is always an option for their child.

Sarah Joy’s journey to advocacy began in 2016 at Edmonton Christian West School with a science class assignment to examine human impact on biological diversity. She decided to tackle a subject close to home: the rising number of abortions of babies with Down syndrome.

In the U.S., an estimated 67 percent to 85 percent of babies who test positive for Down syndrome are aborted, according to a 2012 study published by the Journal of Obstetrics and Gynaecology.

“I called my presentation “Down Syndrome: An Endangered Population,” Sarah Joy said. “At first I looked at what other people were doing for their project, and then I closed my eyes and imagined myself in the future, as an advocate, sharing my thoughts about this and who I am.”

Sarah Joy’s teachers asked her to share her presentation with another class, and she was encouraged to write a speech as well.

The Walkers attended Alberta March for Life in 2017 and 2018. They were then invited to the organization’s board meeting last June, at which Sarah Joy recited her speech. The organizers were so impressed that they invited her to speak at this year’s event.

Sarah Joy held her late father in mind during her talk at the Edmonton event. “When I said yes, my very first thought was, ‘Oh my goodness, my father would be so proud of me,'” she said.

Mother and daughter say they have grown closer through the experience. For both, their faith is the foundation of their pro-life message.

“I think it’s declaring the sovereignty of God and that all of life is God’s sacred gift to us, from conception to our very last breath,” Alisa said. “It means that there is hope. If you’re facing difficult circumstances, there’s hope that there will be a way, God will make a way.”

“You trust God with all your heart and all your soul and all your mind,” Sarah Joy added. “Because God is always with you through everything. I believe if you have faith, you can never lose it, and I’m so, so glad that God is with me.”

PREVIOUS: Pope discusses deaconesses, need for nuns to be servants not ‘maids’