Ahead of visit, pope calls on Romania to remember legacy of martyrs 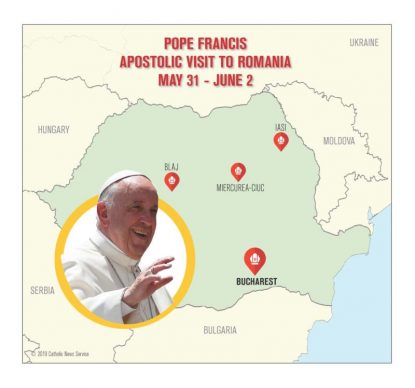 VATICAN CITY (CNS) — Pope Francis said he hopes his visit to Romania will strengthen the bonds of faith that unite Orthodox and Catholics in the country.

The ties between the two churches date back to the apostles Peter and Andrew, who were “blood brothers and shed their blood for the Lord,” like the seven bishop-martyrs of the Eastern-rite Romanian Catholic Church, who died during a fierce anti-religious campaign waged under the communist regime in Romania.

“What they have suffered for, even to the point of offering their lives, is too precious a legacy to be forgotten,” the pope said in a May 28 video message to the people of Romania. “And it is a common inheritance, which calls us not to distance ourselves from the brother or sister who shares it.”

The pope was to visit Romania May 31-June 2 and beatify the martyred bishops.

Almost 82 percent of the country’s 20 million inhabitants say they belong to the Orthodox Church while over 4 percent identify as Catholic, belonging either to the Romanian Catholic Church — an Eastern rite — or the Latin rite.

Pope Francis said he would visit the country “as a pilgrim and as a brother” and that he looked “forward to meeting the patriarch and the Permanent Synod of the Romanian Orthodox Church, as well as the pastors and Catholic faithful.”

“I come among you to walk together,” the pope said. “We walk together when we learn to keep our roots and our family, when we take care of the future of our children and the brother or sister next to us, when we go beyond fears and suspicions, when we let go of the barriers that separate us from others.”

The dates of the trip, Pope Francis’ fifth in 2019, coincide with the 20th anniversary of St. John Paul II’s visit to the country.

Alessandro Gisotti, interim Vatican spokesman, told journalists May 29 that Pope Francis’ visit will be continuation of St. John Paul’s “historic visit” in 1999, the first by a reigning pontiff to a predominantly Orthodox country since the Great Schism of 1054.

However, unlike his predecessor who remained in Bucharest, “the pope said, ‘I want to visit all the areas of the country I can that represent the ethnic, cultural and religious wealth of Romania,'” Gisotti said. “This is what is in the pope’s heart as we have seen earlier in the words he spoke in his video message.”

NEXT: Come July 1, Knights of Columbus get a new look after 79 years