Cardinal ‘Fix It’: Almoner’s job is to model direct charity 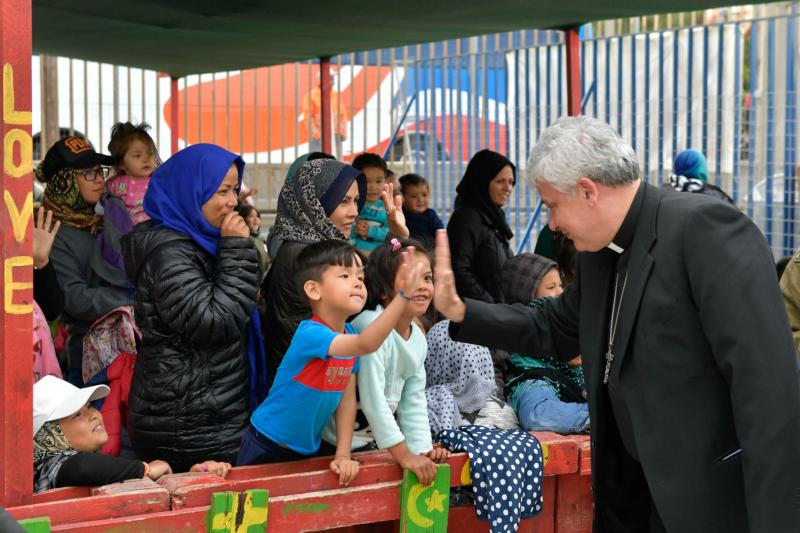 Cardinal Konrad Krajewski, the papal almoner, visits the Hope and Peace Center for refugees near the Moria refugee camp on the Greek island of Lesbos May 8, 2019. Cardinal Krajewski has offered to pay the electricity bill after apparently reconnecting shut-off electricity at a building housing migrants in Rome. (CNS photo/Vatican Media)

VATICAN CITY (CNS) — During his visit to a center offering respite and food to refugees on the Greek island of Lesbos, Cardinal Konrad Krajewski followed a sign that said, “Broken? Fix it here.”

The sign led to a shack where several refugees were working together to fix a bicycle, and one was trying to construct what looked like a coal stove out of large cans.

“Fix it” could be the motto on Cardinal Krajewski’s coat of arms. (Instead, it is “Misericordia,” mercy.)

Twenty-four hours after returning to Rome from Greece, the cardinal went to a government building occupied by some 450 people, including close to 100 children. The power company had cut electricity to the building because no one was paying the bill.

While he did not explicitly admit to climbing down a manhole to reconnect the power, he has taken full responsibility for overriding the electric company’s decision to cut service to the building. And he knows it can have legal consequences.

The office of papal almoner has existed since early in the 13th century. While the Dicastery for Promoting Integral Human Development and Caritas Internationalis, along with its national partners, are responsible for large-scale development, relief and advocacy projects, the almoner’s office is focused on person-to-person charity.

The direct contact with the poor is so important to the Catholic Church that the papal almoner is one of a handful of top Vatican positions that is not suspended when a pope dies. As a sign of the church’s constant love for the poor, the almoner is to continue his work distributing charity “in accordance with the criteria employed during the pope’s lifetime,” say the rules governing the interregnum, or period between popes.

Pairing both small- and large-scale approaches to charity has been part of Catholic tradition for centuries.

As then-Pope Benedict XVI wrote in his 2005 encyclical letter, “Deus Caritas Est” (“God is Love”), “Following the example given in the parable of the Good Samaritan, Christian charity is first of all the simple response to immediate needs and specific situations: feeding the hungry, clothing the naked, caring for and healing the sick, visiting those in prison, etc.”

While the church’s charitable organizations must be professionally competent, he said, professionalism is not enough. “We are dealing with human beings, and human beings always need something more than technically proper care. They need humanity. They need heartfelt concern.”

Cardinal Krajewski is not naive. He spent hours with government officials in Greece May 8-9 trying to promote humanitarian visas for some of the 70,000 asylum-seekers in the country.

But he spent more time in three camps on Lesbos and at three small, privately run centers that offer migrants and refugees a place to relax, to get new clothes, to drink tea or coffee with their friends, to watch a movie or borrow a book and to watch their children on a playground.

He gave little bags of candy to the children and rosaries to the adults, although the majority of them were Muslims. He also handed out small containers of dates and nuts, which the adults would eat when they broke their day’s Ramadan fast that evening.

Pope Francis sent him to Lesbos with more than $100,000, mostly for Caritas Hellas, the Greek Catholic charity. But he had cash in his pockets, too, and he quietly made donations to the small charities assisting the refugees. One gift was met with stunned, open-mouthed gaping. Another elicited a spontaneous burst of tears.

Cardinal Krajewski did not ask for grant proposals or budget reports or a future accounting of how the cash was spent. He saw people helping people in need and, in Pope Francis’ name, gave them resources to do more.

Justice for the asylum-seekers is a big, long-term project. Personally showing them someone outside the camps knows they are there and sees them as human beings, not case numbers, requires presence, which is Cardinal Krajewski’s mission and is meant to be an example.

As Pope Francis said on the first World Day of the Poor in 2017: “Drawing near to the poor in our midst will touch our lives. It will remind us of what really counts: to love God and our neighbor. Only this lasts forever, everything else passes away. What we invest in love remains, the rest vanishes.”

NEXT: Militant posts video threat, saying he is in Canada to kill Asia Bibi