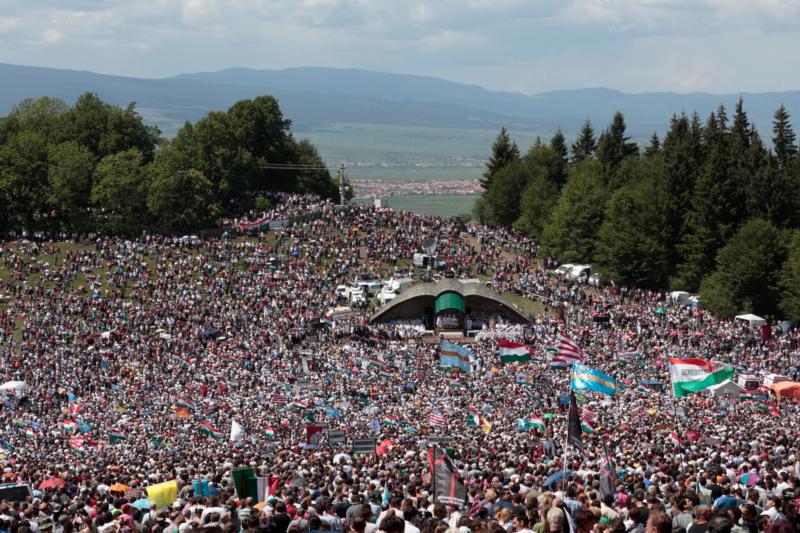 When Pope Francis visits Romania May 31-June 1, he will helicopter to Sumuleu Ciuc, site of the country’s only major Marian shrine and an important place of pilgrimage for Hungarian Catholics.

Father Zoltan Olah, press officer for the pope’s visit, has made the pilgrimage eight times, traveling more than 140 miles each time with students by bicycle to get there.

The pilgrimage is “mostly a Hungarian event,” which serves as “a symbol for the Hungarian presence in Transylvania and, somehow, a Catholic and Hungarian symbol of resistance,” Father Olah said.

Although the Sumuleu Ciuc pilgrimage was banned under communism, it dates to 1567, when a Hungarian ruler tried to force Catholics to convert to Protestantism. They resisted, holding to the belief that they were protected by Mary in defeating the prince’s troops.

A statue of Our Lady of Csiksomlyo, the Hungarian name for Sumuleu Ciuc, stands in a nearby Franciscan Catholic Church. It shows Mary standing on the moon, holding an infant Jesus and a scepter. In 1798, a local bishop declared the statue “miraculous” and crowned it. The Vatican has not recognized any miracle related to it, however.

Devotion to Mary has surged since communism fell in 1989, with an annual Pentecost Saturday pilgrimage attracting hundreds of thousands from Transylvania and beyond, including Hungary, Slovakia and Ukraine. Since the 15th century, the Franciscan order has served as the site’s guardian.

As village groups pass the church on their way to the pilgrimage site, located in the saddle between two mountains, they tip banners three times toward Mary to honor her.

Over the past 30 years, the Pentecost pilgrimage has evolved into an event with religious and Hungarian national significance. Hungarian President Janos Ader, a Catholic, is expected to attend the liturgy Pope Francis will celebrate.

“Csiksomlyo became an iconic place and a symbol of Hungarian national unity,” explained Zslot Szilagyi of Oradea, Romania, 50, the father of three children who is Catholic and a politician who belongs to the Hungarian People’s Party of Transylvania.

Szilagyi, who has previously attended the pilgrimage, said the relationship between Hungarian and Romanian Catholics is good, but “the state is not impartial when it comes to religious communities,” and favors the Orthodox Church.

Father Olah said the main outstanding issue with the Romanian state is expropriated properties still not returned to the Romanian Catholic Church.

Asked if organizers worry that the strong Hungarian flavor might undermine its spiritual impact, Father Olah said: “The archbishop and Franciscan fathers underscore here we are pilgrims. We are not doing political demonstrations and we are not here to attend political speeches.

“On the other hand,” he added, “you see on St. Peter’s Square many national flags. Polish people with Polish flags, Catholics from the U.S. with American flags, and Argentines with their flags, so it is very normal to have national symbols at Csiksomlyo.”

Hungarian author Attila Demko, a Catholic who has written about national identity and participated in the pilgrimage, considers the celebration to be “more of a national event than a religious event.”

“The Mass is there, but thousands of people are singing Hungarian and Szekler (a Hungarian subgroup living in central Romania) anthems.”

Demko said that with the 2018 centennial observance of the end of World War I and the redrawing of the European map under the 1920 Treaty of Trianon that defined the borders of modern-day Hungary, organizers should expect demonstrations of Hungarian pride.

NEXT: Cardinal ‘Fix It’: Almoner’s job is to model direct charity