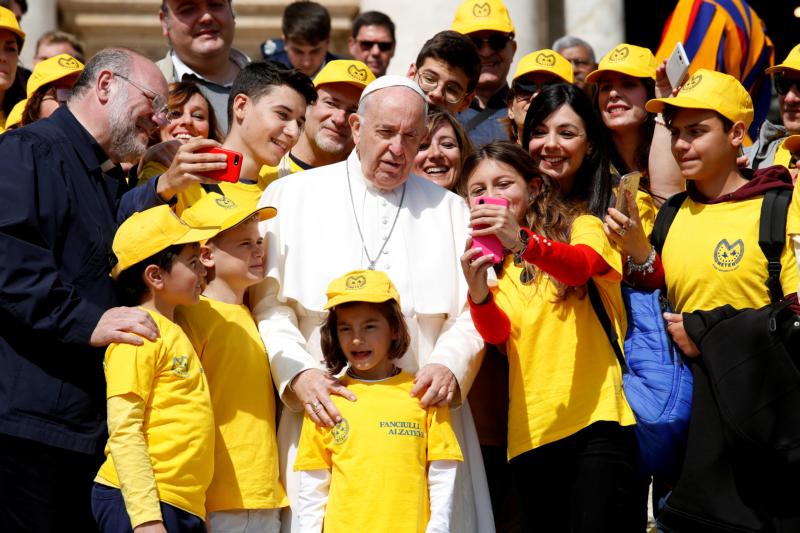 Pope Francis poses for a selfie with pilgrims during his general audience in St. Peter’s Square at the Vatican May 8, 2019. (CNS photo/Remo Casilli, Reuters)

VATICAN CITY (CNS) — Visiting the small Catholic communities in Bulgaria and North Macedonia offered an opportunity to encourage the faithful to remember God’s miracle of being able to feed a multitude with just a few loaves and fishes, Pope Francis said.

He said the trip also gave him a chance to strengthen Christian unity with the Orthodox Church in Bulgaria and witness the extraordinary tenderness displayed by the Missionaries of Charity, the order founded by St. Teresa of Kolkata, who was born in Skopje, North Macedonia.

As is customary, Pope Francis reviewed his apostolic journey to the two southeast European nations May 5-7 during his first general audience after the trip.

Speaking to those gathered in St. Peter’s Square May 8, the pope said he could feel “the strong spiritual presence of St. Mother Teresa” accompany him in North Macedonia.

“We see in this small yet strong woman,” he said, “the image of the church in that land and in other peripheries of the world, a small community that, with the grace of Christ, becomes a welcoming home where many can find rest,” he said.

The pope said he was struck by the way the sisters of the Missionary of Charity saw themselves as sisters and mothers of every person they ministered to with enormous tenderness.

“Many times, we Christians lose this dimension of tenderness,” becoming too serious and “sour,” he said.

An act of charity that lacks love and tenderness would be like tossing someone “a glass of vinegar. No. Charity is joyful, not sour,” he said, and the missionaries are a beautiful example of how to welcome and serve others with tender love, he said.

He said he urged young people of all faiths to dream big and “get in the game” like their compatriot, St. Teresa.

He also praised the way the country welcomed and assisted so many migrants and refugees.

“Immigrants create problems for them, but they welcome them and love them, and the problems get resolved. This is a great thing about these people,” who deserve an applause, he said.

The pope encouraged the nation’s Catholic minority to never doubt the importance of their gifts before the big problems in the church and the world. They are like the tiny bit of yeast that can leaven so much bread because God’s mystery and miracle is at work — Jesus in the Eucharist is the “seed of new life for all of humanity.”

Pope Francis said his visit to Bulgaria gave him great joy by taking one step further on the path of fraternity by meeting Bulgarian Orthodox Patriarch Neophyte and members of the Holy Synod.

“In fact, our vocation and mission as Christians is to be a sign and instrument of unity, and we can be that with the help of the Holy Spirit, putting what unites us before what divided or still divides us.”

The pope mentioned his moment of prayer before an image of Sts. Cyril and Methodius, two brothers who knew how to use their culture with creativity in proclaiming the Gospel.

“Today we also need such passionate and creative evangelizers so that the Gospel may reach all those who still do not know it and can irrigate anew those lands where ancient Christian roots have withered.”