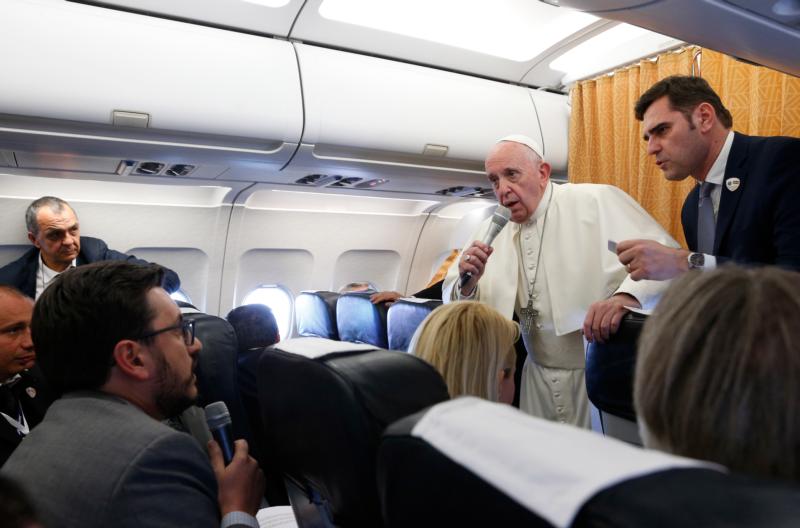 Pope Francis responds to a question from Joshua McElwee of the National Catholic Reporter as he answers questions from journalists aboard his flight from Skopje, North Macedonia, to Rome May 7, 2019. (CNS photo/Paul Haring)

ABOARD THE PAPAL FLIGHT FROM NORTH MACEDONIA (CNS) — The commission Pope Francis appointed to study the history and identity of women deacons did not reach a unanimous conclusion about whether deaconesses in the early church were “ordained” or formally “blessed,” the pope said.

“What is fundamental is that there was no certainty that there was an ordination with the same form and same aim as the ordination of men,” the pope told reporters flying with him from North Macedonia to Rome May 7.

Pope Francis spent just under half an hour on the short flight answering questions, including about the study of women deacons he commissioned in August 2013.

After the six men and six women scholars on the commission finished their work, he said, there was “some agreement,” but not on the crucial question of whether women were ordained or solemnly blessed like abbesses are.

“Some say there are doubts,” the pope said. “Well, then, let’s study some more. I don’t have a problem with that.”

At a May 2016 meeting with the women’s International Union of Superiors General, leaders of women’s religious orders, one of them had asked the pope, “What prevents the church from including women among permanent deacons, as was the case in the primitive church? Why not constitute an official commission to study the matter?”

The pope had told the sisters that his understanding was that the women described as deaconesses in the New Testament were not ordained like permanent deacons are. Mainly, he had said, it appeared that they assisted with the baptism by immersion of other women, with anointing women and with giving witness on behalf of women seeking a dissolution of their marriage because their husbands beat them.

However, the pope had promised to set up the commission, and two of the scholars said in January that they had completed their work. The pope did not tell reporters what steps, if any, would come next.

Although the flight was only 90 minutes and he took only four questions, Pope Francis wanted to share with reporters two moments he described as particularly “touching” during the May 5-7 trip to Bulgaria and North Macedonia.

And, he said, he was moved seeing Missionaries of Charity in Skopje, North Macedonia, where St. Teresa of Kolkata was born, and noticing the meekness and tenderness of the sisters with the poor.

“Today we are used to insulting each other, aren’t we? One politician insults the other; a neighbor insults the other. Even in families people insult each other,” he said. “I don’t know if I can say there is a ‘culture of insult,’ but insults are a weapon always at hand.”

Instead, he said, people should be inspired by the way the Missionaries of Charity treat each person as if he or she were Jesus.

In the context of the trip’s focus on ecumenism and especially Catholic-Orthodox relations in the two predominantly Orthodox nations, Pope Francis told reporters that while formal relations can be tense at times, “I can truly say the patriarchs I’ve encountered are men of God.”

Catholics and Orthodox, he said, cannot claim to believe in and adore “the Holy Trinity without uniting hands as brothers and sisters.”

Confirming that the reporter asking the question was Croatian, Pope Francis also mentioned the ongoing Catholic-Serbian Orthodox tensions over the sainthood cause of Blessed Alojzije Stepinac, archbishop of Zagreb from 1937 to 1960. Cardinal Stepinac remains a national hero for Croats, but not for many Serbian Orthodox and some Jewish groups, who have accused him of being a Nazi sympathizer.

“He was a virtuous man and for this reason, the church beatified him,” Pope Francis said. “But at a certain point in the canonization process, there were points that hadn’t been clarified, historical points. And, I who must sign the decree of canonization, with my responsibility, I prayed, I reflected, I asked for advice, and I saw that I needed to ask for help from (Serbian Orthodox Patriarch) Irinej.”

Together the Vatican and the patriarch set up a commission to study Blessed Stepinac because “for Irinej and for me, the only concern was for the truth,” the pope said. “What good is a decree of sainthood if the truth is not clear?”

The commission ended its work in mid-2017, “but now other points are being studied,” the pope said.

Another journalist asked the 82-year-old pope the source of the strength and stamina needed for his trips abroad.

“First of all, I have to tell you that I don’t go to witches,” the pope said, laughing. “I don’t know, really. It’s a gift from God. When I am in a country I forget everything else. … I’m just there.”

“I don’t get tired during the trips, but I do afterward,” he said. “I ask the Lord to help me be faithful, to serve him in the work that these trips are, so that the trips aren’t tourism — I ask that.”

PREVIOUS: Pope Francis called Jean Vanier to thank him before his death

NEXT: Catholic minorities can still change the world, pope says at audience