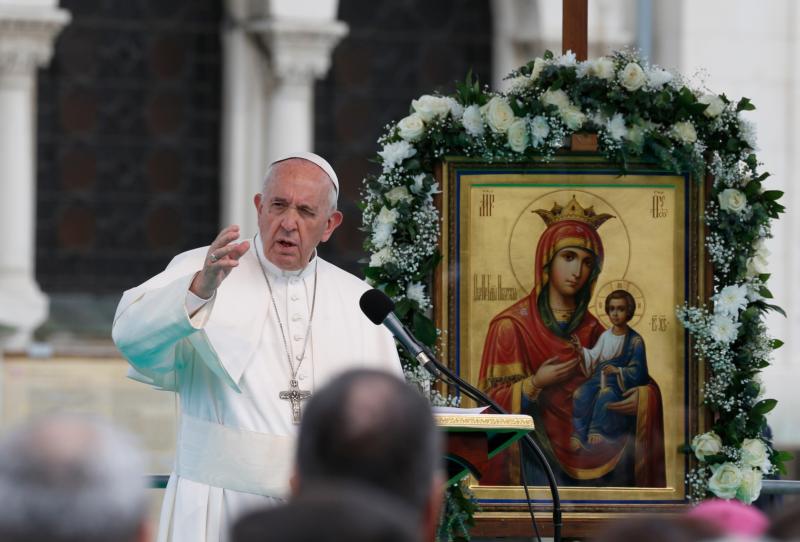 Pope Francis delivers his blessing as he leads the “Regina Coeli” prayer in Alexander Nevsky Square in Sofia, Bulgaria, May 5, 2019. (CNS photo/Paul Haring)

SOFIA, Bulgaria (CNS) — On the day Bulgarian Orthodox celebrate as “St. Thomas Sunday” and read the Gospel about the apostle asking to touch the wounds of the risen Lord, Pope Francis said the divisions within Christianity are “painful lacerations on the body of Christ, which is the church.”

Immediately after meeting Bulgaria’s prime minister and president May 5, Pope Francis went to the Palace of the Holy Synod of the Bulgarian Orthodox Church for a meeting with Patriarch Neophyte and top bishops. Also present was King Simeon II, 81, who ruled only as a child in the 1940s, was exiled and returned to his homeland in 1996.

Speaking of St. Thomas and the wounds of Jesus, Pope Francis prayed that Catholics and Orthodox, like the apostle, would “touch those wounds, confess that Jesus is risen and proclaim him our lord and our God.”

Patriarch Neophyte welcomed Pope Francis with kisses on each cheek and the greeting, “Christos vozkrese” (Christ is risen). According to reporters present, the pope kissed the patriarch’s “engolpion” — an icon on a chain worn instead of a pectoral cross.

The patriarch thanked the pope for the special attention the Vatican has shown to his country and his church for decades. “This is the second visit of a pope to Bulgaria, which we cannot explain except as truly special attention,” he said. St. John Paul II visited in 2002.

Although his church has withdrawn from the World Council of Churches and has a limited international ecumenical involvement, the patriarch told the pope that “here in the capital of Bulgaria — Sofia, which is named for God’s wisdom — we always pray for the unity of the world in Christ and so that united, Christians will be stronger.”

In his speech to the patriarch and synod, Pope Francis expressed hope that one day Catholics and Orthodox could celebrate the Eucharist together, but he pointed to signs that show there already exists a level of oneness in faith.

First, he said, are the “witnesses of Easter,” the Catholic and Orthodox martyrs who gave their lives freely for the faith, especially during the times of communist persecution.

“I believe that these witnesses of Easter — brothers and sisters of different confessions united in heaven by divine charity — now look to us as seeds planted in the earth and meant to bear fruit,” the pope said.

An ecumenism of service to the poor also exists, the pope said, and must be encouraged to grow. While doctrinal and disciplinary issues divide Christians, their call by Christ to assist those in need unites them.

The 9th-century missionary brothers, Sts. Cyril and Methodius, are highly venerated in both Bulgaria and North Macedonia, where the pope was scheduled to travel May 7. The brothers, who evangelized Central and Eastern Europe before the division of Catholicism and Orthodoxy, are considered saints by both churches.

That shared veneration, the pope said, flows from an “ecumenism of mission,” especially in a form that respects the traditions of different cultures, but preaches the one Gospel of Jesus.

The saints’ respect for differences, he said, also teaches Christians today a way to approach the process of increasing European unity while respecting the variety of languages, faiths and cultures present on the continent.

“We too, as heirs of the faith of saints, are called to be builders of communion and peacemakers in the name of Jesus,” the pope said.

After the pope’s formal meeting with the Orthodox leaders, Metropolitan Antoniy of Western and Central Europe accompanied Pope Francis to the nearby St. Alexander Nevsky Orthodox Cathedral. The Orthodox synod had said their clergy would not participate in any joint prayer with the pope, so a chair was placed before the altar and the pope prayed alone in silence for several minutes.

In the square outside the church, the pope then led an estimated 3,000 people in praying the “Regina Coeli” prayer.

The country is “a crossroads where various religious expressions encounter one another and engage in dialogue,” the pope said. He prayed that Mary would intercede with her son to ensure Bulgaria always would be “a land of encounter, a land in which, transcending all cultural, religious and ethnic differences, you can continue to acknowledge and esteem each other as children of the one heavenly Father.”

NEXT: Christians’ first mission is to witness that God is love, pope says