Christians’ first mission is to witness that God is love, pope says 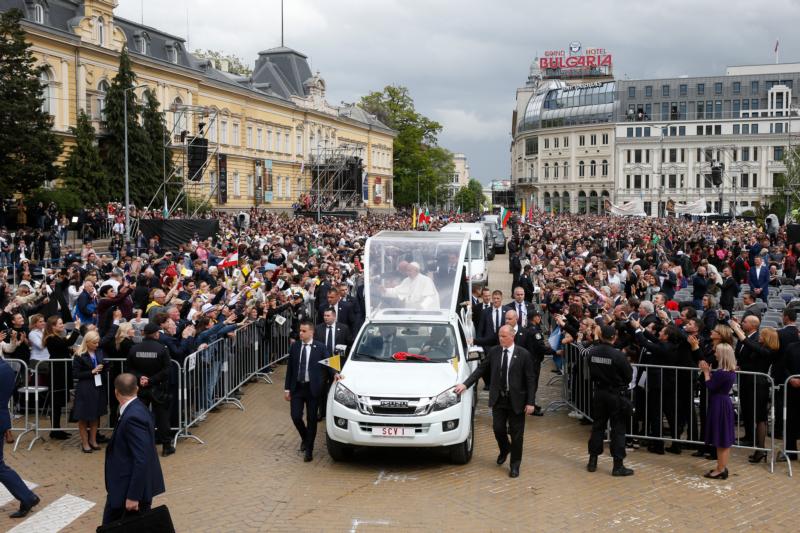 SOFIA, Bulgaria (CNS) — God is love, but too many Christians live their faith in a way that undermines any attempt to communicate that essential fact to others, Pope Francis said.

Celebrating a late afternoon Mass May 5 in Sofia’s Battenberg Square, the pope wore over his chasuble a gold-embroidered, Byzantine-style stole given to him that morning by Prime Minister Boyko Borissov.

The pope’s homily focused on the day’s Gospel reading about the disciples’ miraculous catch of fish after the risen Jesus told them to try again even though they had caught nothing all night.

After the resurrection, the pope noted, “Peter goes back to his former life” as a fisherman and the other disciples go with him.

“The weight of suffering, disappointment and of betrayal had become like a stone blocking the hearts of the disciples,” he said. “They were still burdened with pain and guilt, and the good news of the Resurrection had not taken root in their hearts.”

When things don’t go the way people plan and hope, the pope said, it is natural for them to wish things could go back to the way they were and to just give up on hoping for something new and powerful.

“This is the ‘tomb psychology’ that tinges everything with dejection and leads us to indulge in a soothing sense of self-pity,” Pope Francis said. But the resurrection of Jesus makes clear that a “tomb psychology” is not compatible with a Christian outlook.

However, the pope said, even when Peter seems about to give up, Jesus comes to him, calls him again and reconfirms his mission.

“The Lord does not wait for perfect situations or frames of mind; he creates them,” Pope Francis told the estimated 7,000 people gathered for the Mass. Jesus “does not expect to encounter people without problems, disappointments, sins or limitations,” but he encourages and loves and calls people to start over again.

“God calls and God surprises because God loves,” he said. “Love is his language.”

Christians draw strength from knowing God loves them and that love must motivate them to love others as they try to share the Christian message, the pope said.

With papal trips always described as visits to confirm Catholics in the faith, Pope Francis used his homily to encourage Bulgaria’s 68,000 Catholics — just 1 percent of the population — to acknowledge the wonders God has done for them and to set out again on mission, “knowing that, whether we succeed or fail, he will always be there to keep telling us to cast our nets.”

Thirty years after the fall of communism and the breakup of the Soviet bloc, the pope called Bulgarian Catholics to a “revolution of charity and service, capable of resisting the pathologies of consumerism and superficial individualism,” and instead sharing the love of Christ.

NEXT: Roses and the cross: Pope meets refugees in Bulgaria