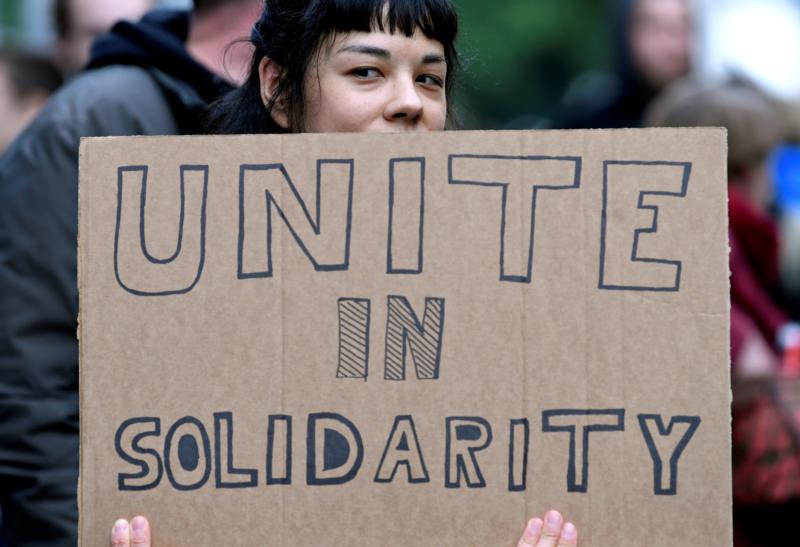 A woman holds a placard during a demonstration called “No fascism in Belgium or in Europe!” outside the European Parliament in Brussels May 28, 2019. Catholic Church leaders welcomed the outcome of key European Union elections as endorsing their continent’s unity. (CNS photo/Piroschka van de Wouw, Reuters)

“People have shown responsibility by voting. This is a very positive sign,” said Archbishop Jean-Claude Hollerich of Luxembourg, president of the Brussels-based Commission of European Union Bishops’ Conference, or COMECE.

“My message to politicians now is not just to engage in party politics, but to consider the needs of Europe’s citizens,” he said. “Europe is built on compromises, so we should move in that direction.”

In a May 27 Vatican Radio interview, Archbishop Hollerich said he was pleased that populist parties, despite a strong showing, had not “gained enough votes to block the parliament,” and that traditional mainstream center-right and center-left parties would have to negotiate with other parties.

He added that strong support for the Green Party, especially among young Europeans, would force mainstream politicians to recognize that an “integral ecology” had to be “at the heart of future politics.”

“I hope what now follows will be transparent to the voters, so they can feel politics is being done for them, and isn’t just power games in corridors,” he said.

“The Catholic Church has its agenda and wants a dialogue around it, and the European treaties have asked for just such a dialogue. We’d like this to be a bit more structured and in-depth now, rather than just a photo show.”

More than 51 percent of eligible voters across the EU’s 28 member nations took part in the ballot, the highest turnout in two decades.

The center-right European Peoples Party and center-left Progresssive Alliance of Socialists and Democrats, which shared a majority of seats for four decades, saw their votes reduced to 23.8% and 24.4%, respectively.

Meanwhile, environmentalist, Euroskeptic and far-right parties, including Italy’s anti-immigrant League party and Hungary’s Fidesz party, made substantial gains in what analysts believe could force changes in EU practices and procedures.

In Germany, COMECE’s vice president, Bishop Franz-Josef Overbeck of Essen, welcomed the relatively high turnout as “testimony to a mature democracy,” while Archbishop Ludwig Schick of Bamberg said he was relieved “national populist-oriented forces” had gained less support than predicted.

“But parties promoting the unity of Europe in solidarity, peace, stability and social progress could face greater difficulty in future,” Archbishop Schick said in a May 27 statement.

“Churches, especially the Catholic Church, are present in all EU countries, participating in all areas of life, and with the Gospel and Christianity, our church is one of the mothers of Europe. It has the task and opportunity now to moderate centrifugal powers,” he said.

Bishop Agidius Zsifkovics of Eisenstadt, Austria, said May 29 he was also relieved there would be no “far-reaching right-wing pressure” in the new 751-seat European Parliament, through the next five years and that voters had chosen “the aspiration to build bridges” over “a Europe of fortresses and walls.”

Asked at a May 27 Rome media conference why populist groupings had gained strong Catholic support, Archbishop Hollerich said many Catholics had “felt neglected and unrepresented in politics,” and voted for parties standing “against the European system’s elites.”

“But they also supported the populists because our Catholicism is no longer alive,” he added. “We’ve become a church which is very ritualistic, more ideological than full of faith.”

PREVIOUS: Come July 1, Knights of Columbus get a new look after 79 years

NEXT: Cardinal Pell’s appeal of guilty verdict in abuse cases set for hearing