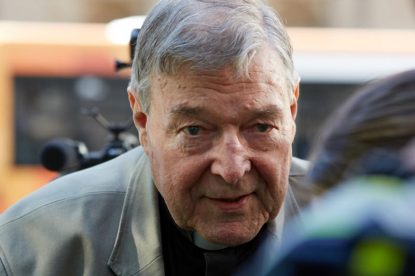 MELBOURNE, Australia (CNS) — Should an appeals court uphold his conviction for child sexual abuse, Australian Cardinal George Pell appears to have come to terms that his spectacular fall from grace could be complete in upcoming days.

The cardinal, who turns 78 June 8 and is a former key adviser to Pope Francis, would be stripped of his priesthood and expelled from the College of Cardinals should his conviction and the remaining six years of his prison term be upheld.

Cardinal Pell’s visceral reaction to most things in life is to fight if he thinks he is right, according to multiple biographies and interviews. This time he has opted not to fight for a reduced prison sentence if his conviction of five counts of abusing two choirboys at the archdiocesan cathedral in Melbourne in 1996 is upheld. He would be eligible for parole in July 2022 if he keeps a clean record in prison.

Under existing law, any appeal would have to argue that his sentence was “manifestly excessive.” Yet the state of Victoria, which tried and found Cardinal Pell guilty has, on average, lower sentences for criminal acts — including sexual abuse — than other Australian states, lawyers told Catholic News Service.

Cardinal Pell’s decision is seen by observers as a credit to Judge Peter Kidd who presided over the trial. Kidd’s masterstroke was his decision to livestream the court procedings on national television for transparency and reflects his concerns about a growing trend of erroneous media reporting of sexual abuse trials.

In minute detail over the course of an hour, Kidd methodically laid out the sentencing guidelines after the verdict was returned, explaining how he reached his conclusion to sentence the cardinal to six years in prison. Kidd was widely praised for providing clear insight into the complexities of the little understood, multilayered sentencing equation, which in turn should provide the perception of justice being served among the public.

Lawyers contacted by Catholic News Service said that Kidds’ reasoning and demeanor would mean an appeal would be “a waste of time and money.”

Cardinal Pell’s last chance of freedom will be heard by the Appeals Division of the Supreme Court of Victoria, the state’s highest. Three judges will preside over the hearing June 5-6. A decision is expected in several months.

Many of the cardinal’s supporters have criticized the guilty verdict, saying that it was his word against those of his accusers. Yet not one of his supporters has legally seen the video testimony of the accusers because it was shown in closed court to protect their identity.

The case comes down to the fact that the jury believed the victims and not Cardinal Pell. Attorneys noted that Australian judges are loath to overturn jury verdicts so as not to undermine a central pillar of a British-based legal system such as those in the United States and Australia.

The defense appeal rests on three arguments. The first and second focus on alleged legal and process errors by Kidd. The first was a complaint against Kidd’s decision not to show a video prepared by defense attorneys. It purported to show how Cardinal Pell, clad in many layers of vestments, could not have easily abused the children. However, the cardinal did not take the witness stand to be quizzed on the point.

The third argument centers on Kidd’s decision not to have Cardinal Pell stand up in court and declare as charges were read that he pleaded not guilty; instead Kidd showed jurors the video footage of his plea recorded at the original trial four months earlier. The case was retried with a new jury after the original jury was dismissed after it failed to reach a unanimous verdict.

Even should the appeal succeed, there is strong chance Cardinal Pell will be back in court for a new trial on the charges.

Additionally, there are two civil suits underway against Cardinal Pell, the Melbourne Archdiocese and locally based religious orders from two claimants who have alleged that the prelate inappropriately touched them as young boys in swimming pools and gyms.

The cardinal’s March trial and subsequent conviction was the end result of several dozen police investigations. Sexual abuse is notoriously difficult to prosecute with many claimants because there are no other witnesses.

Some lawyers have suggested Cardinal Pell’s chances in his appeal may have been weakened by a strategy of aggressive attacks on the accusers by his defense lawyer, Robert Richter, who made his name representing members of Melbourne’s crime underworld. Richter is being replaced — standard practice in Australia for appeals — by Bret Walker, a celebrity attorney from Sydney and a noted appeals expert.