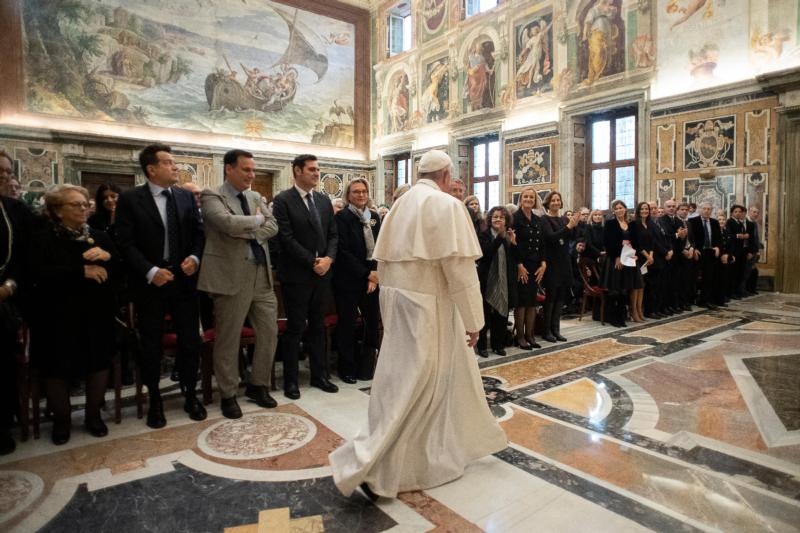 Pope Francis leads an audience with members of the Foreign Press Association of Italy, at the Vatican May 18, 2019. (CNS photo/Vatican Media)

VATICAN CITY (CNS) — The task of journalism is to seek the truth, which requires humility and freedom of the press, Pope Francis told foreign correspondents working in Italy.

“At a time when many spread fake news, humility keeps you from peddling food spoiled by disinformation and invites you to offer the good bread of truth. The humble journalist is a free journalist: free from pressures, free from biases,” he said, adding that such freedom also required courage.

The pope made his remarks during an audience at the Vatican May 18 with members of the Foreign Press Association in Italy.

He said the church has always held the work of journalists in high esteem and regard, even when their job entails touching sore “wounds,” including wounds within the church.

“Your work is valuable because it contributes to seeking the truth, and only the truth sets us free,” he said.

Because of the great impact they can have, journalists have a huge responsibility in the way they carry out their “indispensable role,” the pope said. They must pay attention to the words and images they choose and the information they share on social media, he said.

“Therefore, I urge you to work in accordance with the truth and justice so that communication may truly be a tool for building, not destroying; for coming together, not clashing; for dialogue, not monologues; for guiding, not disorienting; for understanding, not misinterpreting; for walking in peace, not sowing hatred; for giving voice to the voiceless, not for giving a bullhorn to the one shouting the loudest,” he said.

Journalists, Pope Francis said, must always recognize the power they hold in their hands and resist the temptation to assume they already know everything and to publish news that has not been adequately fact-checked.

“At a time when many tend to prejudge everything and everyone, humility also helps journalists not be dominated by speed and to try to slow down, to find the time needed to understand” and get all the facts right before telling the story or commenting, he said.

The pope recognized the temptation to do what is easier: not ask too many questions; be happy with the initial answers or predictable solutions; oversimplify; not go in-depth and stick to just how things appear. Instead, it takes much effort to carry out a proper investigation in order to “represent the complexity of real life.”

People must understand that “an article, a tweet, a live television or radio broadcast can do good,” but journalists also “can do harm to others and sometimes entire communities if they are not careful and meticulous,” the pope said.

Pope Francis also recognized the danger many journalists are exposed to and the lives lost when covering conflicts or other tragedies.

“Freedom of the press and expression are an important indicator of the state of health of a country,” he added, noting how one of the first things dictators do is stop, manipulate or “disguise” the freedom of the press.

He told the correspondents the world needs journalists “who are on the side of the victims, the persecuted, those who are excluded, rejected and discriminated against” because of their religion or ethnicity.

The world needs a light shone on “the darkness of indifference” and to be consistently reminded of those who suffer, victims of forgotten wars, babies who are aborted, children who lack food and health care, child soldiers and the lives of those who have been violated, he said.

Do not forget the real people — their stories and dreams — behind the statistics when covering immigration, he also told the foreign correspondents.

The pope urged journalists to cover all the immense good that people are doing in the world — people who do not give in to indifference, who do not flee in the face of injustice, but who seek to quietly build a better world.

“There is an ocean overflowing with good that deserves to be known and that gives strength to our hope,” he said, emphasizing the way female journalists are particularly suited to recognize and tell such stories.

At the end of his talk, the pope gave journalists a copy of “Comunicare il Bene” (“Communicating the Good”), a book compiling his many talks and messages in Italian addressed to journalists and people working in communications.