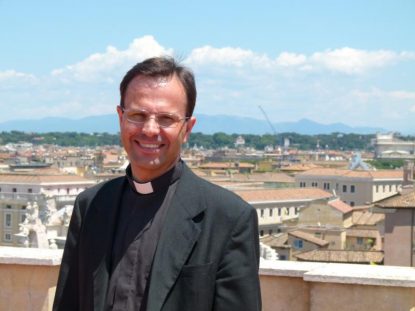 Austrian Father Hermann Geissler is pictured in a June 3, 2014, photo. A Vatican court acquited the Vatican official, citing lack of convincing evidence for sexual impropriety in the confessional. He was an official at the Vatican Congregation for the Doctrine of the Faith. (CNS photo/courtesy FSO Rome)

VATICAN CITY (CNS) — The Vatican’s highest court cleared a Vatican official accused of the crime of solicitation in the confessional.

The court, the Apostolic Signature, the Vatican’s highest court, said May 17 that it finished an “administrative penal process” of Father Hermann Geissler, an official at the Vatican Congregation for the Doctrine of the Faith, who had been accused of “a grave delict.”

Five court members convened May 15, it said in a communique, and “acquitted the defendant” because the “configuration” or appearance of the alleged crime was not “proven with the moral certitude necessary after a careful examination of the affair.”

Father Geissler, who has publicly maintained his innocence, had resigned from his job in an effort “to limit the damage already done to the congregation and to his community” and asked that a “canonical process already initiated continue,” the doctrinal office said Jan. 29.

However, the Vatican court carried out an administrative penal process, which is quicker and shorter than a full judicial process; normally the accused is often presented with the evidence and given an opportunity for self-defense, but there is no trial and no witnesses are called.

Father Geissler had been accused of a serious delict against the sanctity of the sacrament of penance — the solicitation to sin with the confessor against the sixth commandment. Such serious cases are under the authority of the Congregation for the Doctrine of the Faith, but the Apostolic Signature was asked to handle the case, presumably to avoid the potential conflict of interest.

Father Geissler, a 53-year-old theologian, is a member of a community called The Spiritual Family The Work. He had worked at the congregation for 25 years and had been head of its doctrinal section since 2009.

Doris Wagner-Reisinger, a German theologian, told the National Catholic Reporter Jan. 21 that, with the help of a canon lawyer, she reported to doctrinal congregation officials in 2014 that the priest had propositioned her in 2009 during confession.

She told NCR that, after her accusation, “I got a response that stated that Father Geissler had admitted, and had asked pardon, and was admonished.”

She had talked about the unwanted encounter at a November event in Rome, which featured three women survivors of clergy sexual abuse.

Without naming the priest involved, she had told her audience about the sexual harassment she experienced from the priest who had been her confessor when she was a nun with The Spiritual Family The Work.

PREVIOUS: Pope assures missionaries of his prayers for kidnapped priest