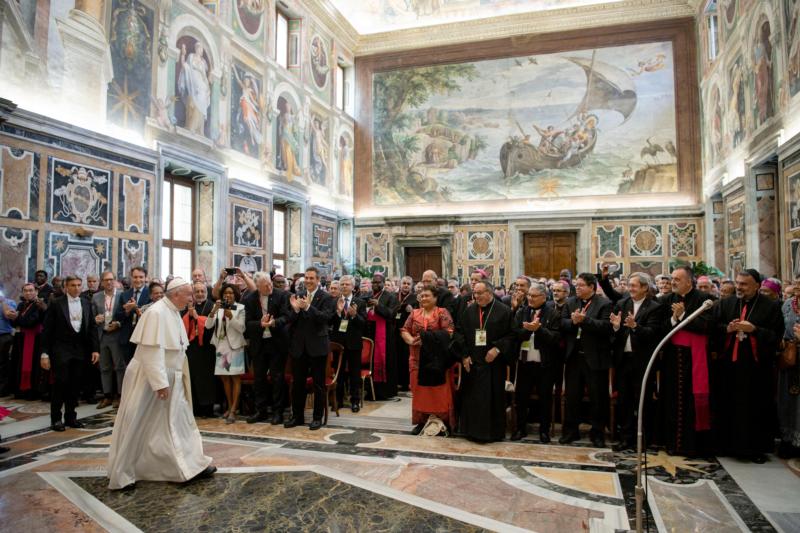 Pope Francis leads an audience with delegates attending the general assembly of Caritas Internationalis, at the Vatican May 27, 2019. The pope called for charity to be given with heart and soul. (CNS photo/Vatican Media)

VATICAN CITY (CNS) — Charity should be given freely and lived humbly with the poor, never letting it become hypocrisy, a slick business or a way to soothe a troubled conscience, Pope Francis said.

The Vatican-based confederation of more than 160 Catholic national charities was holding its 21st general assembly in Rome, electing new officials, reviewing polices and focusing on the theme, “One Human Family, One Common Home.”

The pope thanked delegates for working to help those “left on the margins” and for building up in the world God’s kingdom where justice, love and peace reign.

“Charity is not a sterile service or a simple donation to hand over to put our conscience at ease,” he said. “Charity is God our Father’s embrace of every person, particularly of the least and those who suffer.”

The church is not a humanitarian organization, the pope said. It is something so much bigger: “in Christ, it is the sign and instrument of God’s love for humanity and for creation.”

The pope urged the Caritas representatives to live out this charity freely, humbly and with a spirit of poverty.

“One cannot live charity without having a personal relationship with the poor — to live with the poor and for the poor” so as to learn from them how charity is sharing.

“It is necessary to always be careful not to fall into the temptation of living a hypocritical or deceptive charity, identified with almsgiving” or fundraising or used as a “sedative” to relieve an uneasy conscience, the pope said.

“This is why one must avoid equating charitable activity with philanthropic strength or with well-planned efficiency or with over-the-top and flamboyant organization,” he said.

Pope Francis told the delegates that of all the ways people could best imitate God, the most desirable virtue is charity.

This is why it is “scandalous” to see people working in charitable organizations become bureaucrats, executives or businessmen, he said. “They speak a lot about charity, but they live in luxury” or wasteful extravagance or else “they organize forums on charity and unnecessarily waste a lot of money.”

“That is why I would like to reemphasize that charity is not an idea or a pious sentiment,” but it is a real encounter with Christ, and it is wanting to live with the heart of God, the pope said.

PREVIOUS: Prenatal diagnosis of illness is no excuse for abortion, pope says

NEXT: ‘Startling’ inaction on climate change must end, pope says