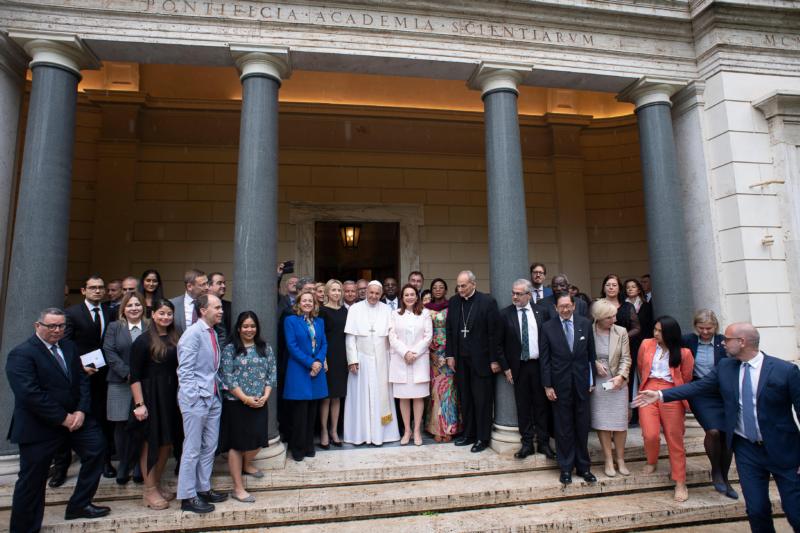 Pope Francis poses for a photo with participants of a Vatican climate change conference for finance ministers from around the world May 27, 2019. The conference, “Climate Change and New Evidence from Science, Engineering and Policy,” was sponsored by the Pontifical Academy of Science. Among the issues discussed during the event was the fulfillment of the U.N. Sustainable Development Goals. (CNS photo/Vatican Media)

VATICAN CITY (CNS) — If the world is to win the fight against climate change, its leaders must stop profiting from fossil fuels that threaten the survival and well-being of the planet and its inhabitants, Pope Francis said.

Addressing a Vatican climate change conference for finance ministers from around the world May 27, the pope said that the current crisis is “caused by a confusion of our moral ledger with our financial ledger.”

“We live at a time when profits and losses seem to be more highly valued than lives and deaths, and when a company’s net worth is given precedence over the infinite worth of our human family,” he said.

The conference, “Climate Change and New Evidence from Science, Engineering and Policy,” was sponsored by the Pontifical Academy of Sciences. Among the issues discussed during the event was the fulfillment of the U.N. Sustainable Development Goals, a list of 17 major commitments that the world’s nations and U.N. agencies will be asked to pursue until 2030.

The pope gave his address after a private meeting with Raoni Metuktire, chief of the Kayapo indigenous group in the Brazilian Amazon region, to discuss the Synod of Bishops on the Amazon, which will be at the Vatican in October.

“This meeting attests to Pope Francis’ care for the Amazonian people and environment, as well as to his commitment to safeguard our common home,” said Alessandro Gisotti, Vatican interim spokesman.

The climate change conference featured reports from climatologists and experts on the dangerous effects of greenhouse gas emissions on the environment.

Despite the commitment by world leaders to meet the U.N. goals, the pope lamented that an increase in investments in fossil fuels and a decrease in clean energy investments indicate that “the signs today are not good.”

“We continue along old paths because we are trapped by our faulty accounting and by the corruption of vested interests,” he said. “We still reckon as profit that which threatens our very survival.”

Pope Francis said the “effects of global inaction are startling” and cited recent extreme global meteorological events, such as heat waves, droughts, fires and floods, as “a dire premonition of much worse things to come, unless we act and act urgently.”

“It is my prayerful hope that, as stewards of the world’s finances, you will agree upon a common plan that accords with climate science, the latest in clean energy engineering and, above all, the ethics of human dignity,” he told the finance ministers.