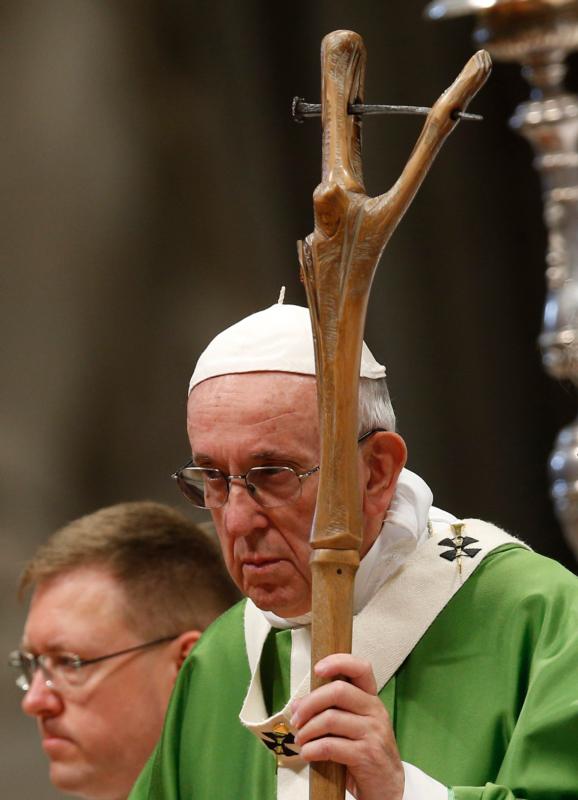 Pope Francis holds his pastoral staff as he celebrates the closing Mass of the Synod of Bishops on young people, the faith and vocational discernment in St. Peter’s Basilica at the Vatican in this Oct. 28, 2018. The pastoral staff in this photo was cited in a letter released by 19 Catholics that accuses the pope of heresy. (CNS photo/Paul Haring)

LANCASTER, England (CNS) — A small group of Catholics has accused Pope Francis of heresy and has written to the world’s bishops asking them to “take the steps necessary to deal with the grave situation of a heretical pope.”

The letter, originally signed by 19 people — mostly scholars and retired academics — was published April 30 by LifeSiteNews, a frequent critic of Pope Francis — and was posted on the change.org petition website by Nick Donnelly, a permanent deacon of the Diocese of Lancaster and one of the original signers of the letter.

Much of the 20-page letter is focused on “Amoris Laetitia,” the pope’s 2016 exhortation on marriage and family life, and especially its suggestions for a process of guided discernment that might eventually lead to a determination that a couple who is divorced and remarried only civilly could access the sacraments.

Looking at more current issues, the letter objects to a document on human fraternity that Pope Francis signed with a Muslim leader in Abu Dhabi in February. The petition writers particularly objected to a line in the Abu Dhabi statement that said, “The pluralism and the diversity of religions, color, sex, race and language are willed by God in his wisdom, through which he created human beings.”

Pope Francis, at a general audience later, clarified that God did not create religious diversity, but rather allows it to happen, as he created human beings who possess free will.

The letter writers also objected to statements Pope Francis has made about ecumenical relations and his gestures of welcome and respect for homosexual persons.

Among “other indications” that Pope Francis is a heretic, the letter writers listed, “At the opening Mass of the Synod on Youth in 2018, Pope Francis carried a staff in the form of a ‘stang,’ an object used in satanic rituals.” The wooden crozier — with the arms of the cross in a “V” shape rather than forming a “T” — was given to the pope by Italian young people for use at the Mass.

NEXT: Nations stirring up nationalism betray their mission, pope says