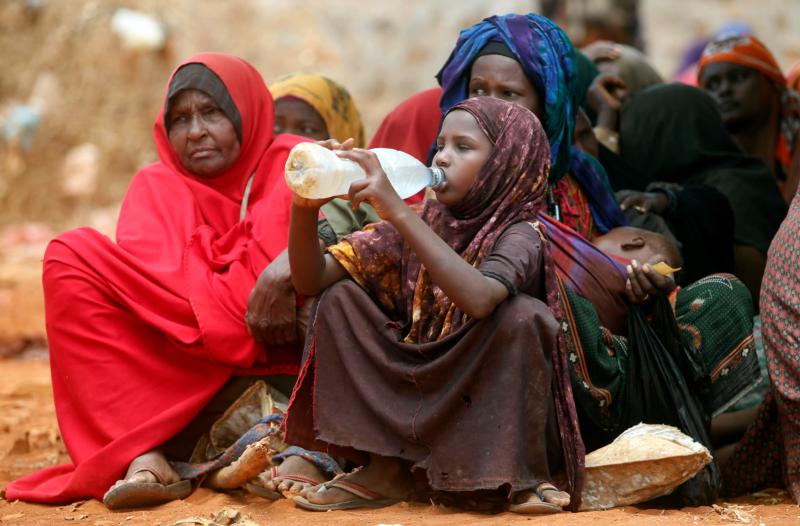 Internally displaced Somali women wait for relief food while a child drinks water April 9, 2017, at a distribution center in Baidoa, Somalia, after fleeing from drought stricken regions. The apostolic administrator of the Diocese of Mogadishu called on the world to “pay attention to the plight of Somali people” as they face critical food shortages because of a crippling drought. (CNS photo/Feisal Omar, Reuters)

NAIROBI, Kenya (CNS) — The apostolic administrator of the Diocese of Mogadishu, Somalia, called on the world to “pay attention to the plight of Somali people” as they face critical food shortages because of a crippling drought.

“Most of the affected areas are those in the country’s north and northwest,” he told Catholic News Service April 29 in Nairobi.

The bishop was in the Kenyan capital to attend a meeting of Catholic nongovernmental organizations addressing humanitarian needs in Somalia.

Somalia and some countries in East Africa have been affected by prolonged drought, Bishop Bertin said.

While in Kenya, the bishop also visited Dadaab, one of the world’s largest refugee complexes, in the northeastern part of the country. It houses mainly Somali refugees fleeing violence in their homeland.

The camp houses an estimated 270,000 refugees, he said, including people from South Sudan, Ethiopia and Uganda.

Bishop Bertin said he believed the U.N. refugee agency, UNHCR, should be the agency that determines how and when the refugees return to their homelands, despite calls by the Kenyan government to close Dadaab.

“I am against any move to have settled refugees in a country like Kenya and from countries like Somalia forcefully kicked out of the country under whatever reasons, including a said insecurity threat,” the bishop said.

“In any given reason as to why this should be carried out, the UNHCR should be there to ensure the reasons are justified,” he added.

Bishop Bertin suggested that a full screening of the Somali refugees must be conducted before they are sent home.

“At Dadaab refugee camp, for example, there are different types of Somali refugees,” he said.

“There are Somali refugees who, in the course of their stay in Kenya, have married the Kenyan Somali people. Here these people qualify as Kenyans by virtue of their marriage and their children as Kenyans by birth,” he explained.

The bishop also discussed the need to consider that some parts of Somalia where refugees would be repatriated are experiencing serious insecurity.

“This, for me, can hardly be taken for granted,” he stressed, noting that the UNHCR should ensure that the repatriated refugees are provided sufficient aid and have access to necessary resources to allow them to begin a new life and ensure their safety.

“My take is that a UNHCR accompaniment of the returning Somali refugee should be a must,” he said.

PREVIOUS: Periphery priest wants church to keep reaching out to the world