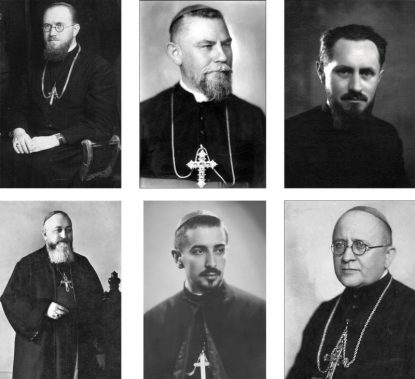 WARSAW, Poland (CNS) — A cardinal incarcerated for 18 years after refusing to abandon his church and a bishop thrown in an unmarked grave after starving to death in an “extermination prison” are among seven communist-era martyrs who will be beatified by Pope Francis during his upcoming visit to Romania.

“This will be a recognition that Christ was present during all the suffering, and a sign of joy in our church’s resurrection,” said Bishop Mihai Fratila of the Romanian Catholic Eparchy of Bucharest.

“It will also be a reminder that Christians should uphold Christ’s eternal truth and resist compromises. We cannot engage in dialogue with the forces of darkness and evil,” he added.

Preparations are underway for the June 2 beatification of Cardinal Iuliu Hossu and six other Romanian Catholic bishops, who died as martyrs after their church’s forced suppression.

Bishop Fratila told Catholic News Service that a 2,000-page dossier on the prelates had been completed after the 2013 opening of Romanian Communist Party archives. The decision to honor the martyrs, approved by Pope Francis March 19, went “far beyond cultural and historical questions or motives of revenge,” he said.

“We knew the facts of the persecution, but needed documentation to clarify the communist regime’s logic and motives,” Bishop Fratila said.

“In all the countries of Eastern Europe, we’ve seen it isn’t enough to make the sign of the cross and show piety on paper. Being Christian means making choices in our daily lives, as these martyr stories clearly show,” he added.

The beatification Mass will be celebrated in Blaj on the final day of the pope’s three-day pilgrimage. The Divine Liturgy and beatification ceremony are expected to attract tens of thousands from the Romanian and Latin Catholic churches, both of which were repressed under communist rule from 1948 through 1989.

The seven prelates were among at least 600 Catholic clergy arrested and told to find other jobs in October 1948, when their Eastern Catholic Church was declared reunified with Orthodoxy at a widely boycotted synod in Cluj.

Many priests went into hiding or were killed by security forces during a subsequent campaign to eradicate the Romanian Catholic Church.

Auxiliary Bishop Vasile Aftenie of Fagaras and Alba Iulia died in 1950 at the age of 50 after 10 months of brutal interrogation. Witnesses said his bishop’s feet stuck out of his makeshift coffin when he was buried in the capital’s Bellu cemetery.

Bishop Valeriu Frentiu of Oradea Mare became bishop of Lugoj in 1913 and later was transferred to Oradea, where he opened a seminary and several schools and developed monastic life. After his arrest by security forces, he died in an “extermination prison” at Sighet at age 77 after being denied medical care.

Bishop Ioan Suciu became auxiliary bishop of Oradea in 1940. He died from mistreatment and starvation at Sighet in 1953 at the age of 45.

Auxiliary Bishop Tit Liviu Chinezu of Fagaras and Alba Iulia froze to death at Sighet at age 50. He had served as rector of the Theology Academy in Blaj and was secretly consecrated a bishop while incarcerated in 1949 with authorization from the papal nuncio.

Among the other martyrs, Bishop Ioan Balan of Lugoj, a New Testament translator, was arrested for refusing to submit to Orthodoxy and died from mistreatment while under house arrest at an Orthodox monastery after four years in the Sighet prison.

Bishop Alexandru Rusu of Maramures, a former theology professor and newspaper editor, also was held in Orthodox monasteries after surviving Sighet, but he received a life sentence in 1956, at the age of 73, for “instigating high treason” after holding a Romanian Catholic liturgy in Cluj’s university church. He died in 1963.

He was buried in an unmarked grave, after dying of septicemia in an underground cell at Gherla Prison.

Cardinal Hossu, a former military officer who had defended Romania’s Jewish minority during World War II, also was secretly consecrated by the papal nuncio. He survived four years at Sighet and was made a cardinal secretly by Pope Paul VI in 1969 during 14 years’ detention at Caldarusani. He died a year later in a Bucharest hospital.

In his Easter homily, Cardinal Lucian Muresan of Fagaras and Alba Iulia said the bishops had recognized their church would survive the “calculations, schemes and strategies” used against it and had “assured its continuity” by “choosing the hard way of martyrdom.”

He said their testimony should “strengthen new generations in troubled times,” and “highlight the importance of martyrdom and sacrifice in a fluid and permissive society.”

NEXT: Pope’s Marian pilgrimage to shine light on ethnic Hungarians